Technology supports automation, robotics, at scale for a variety of applications.
By Henry S. Kenyon 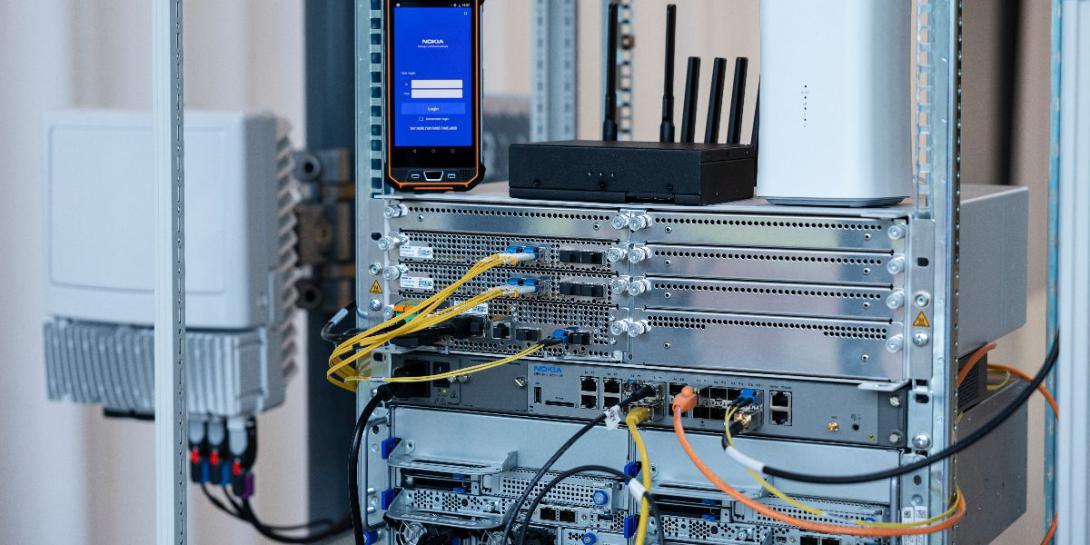 The U.S. government is working with commercial businesses to test and develop faster, next-generation 5G wireless technology-based applications for use in a variety of environments, from warehouses to the battlefield.

Such networks just now are rolling out in the commercial sector and offer government users the possibility to provide enhanced, high data, high bandwidth communications and computing for everything from tactical data networks to managing fleets of autonomous vehicles.

4G/LTE technology enabled the mobile broadband Internet. What 5G allows is the ability to expand broadband services by enabling significantly more bandwidth with faster speeds and lower latencies. This means higher capacity, higher throughput by providing access to more spectrum. While spectrum is a scarce resource, 5G allows users to use a mix of low-band, mid-band and high-band spectrum to deliver the type of 5G experience the customer demands.

“But more bandwidth is just the beginning for 5G,” says Steve Vogelsang, chief technology officer for Nokia Federal. “The enhanced bandwidth and spectrum enable a variety of new capabilities such as the Internet of Things (IoT) connecting devices, autonomous vehicles and industrial uses.”

From a government perspective, officials have said 5G aligns with its growing use of the electromagnetic spectrum, taking over from what had been the province of customized radios and devices.

“The higher data throughput of 5G networks means lower latency and the ability to support real-time networks,” says Thierry Klein, president of Bell Labs Solutions Research at Nokia Bell Labs. Such networks can handle many more devices than 4G networks and those devices can range from sensors to machines and industrial automation and IoT-enabled devices to robots. This capability allows organizations to access a new and different set of industrial and enterprise applications.

“That’s where I think it bridges from enterprise industrial applications to government applications—when you deploy high performance networks to support some of those mission-critical applications that have a mix of throughput, latency requirements and rapid deployment capabilities that you need in certain environments,” Klein says.

Vogelsang puts 5G into two broad use categories. The first is automation involving large facilities such as warehouses or shipping hubs. 5G advanced wireless technologies help drive new concepts for automating workflow and activities, such as the use of autonomous vehicles and robots.

However, he notes that autonomous forklifts and other industrial vehicles will require reliable network connections for safe operation. Similar uses of 5G can be applied to military logistics and bases.

One use for 5G networks that Nokia is working on is to support industrial robots, especially mobile ones used in warehouse and logistical applications. The technology’s high throughput and low latency allows users to move some of the robotic control functions from the robots into the network, or even an edge cloud, Klein says.

The robots would still retain onboard functions such as motor and collision avoidance controls, but the network allows some of the control capabilities to be offloaded onto the network, allowing organizations to make intelligent decisions, not just at the individual robot level, but at the robotic fleet level as well, Klein adds.

In a busy warehouse, an individual robot can only sense what is immediately around it, but if it is connected to the other machines around it via the network and the cloud, it creates greater situational awareness for the all the robots in the facility.

“Now you’re talking about not optimizing the behavior and performance of a single robot, but you’re talking about optimizing the performance of an entire fleet of robots, including other nonrobotic assets that may be in your facility. Through that you get a degree of productivity, efficiency and safety because you have that awareness of everything that’s going on in your facility,” Klein says.

This connectivity would also extend to other devices at the facility, such as sensors and cameras to provide greater situational awareness and gather more information to make operational decisions.

The U.S. Defense Department is a major customer for wireless applications. One example the military is thinking about is the concept of a “smart base” operating autonomous systems and services all running on a 5G network.

5G provides good wireless coverage with a robust communications network. Government facilities usually rely on commercial mobile service providers with a nearby wireless network, Vogelsang explains. Typically, such arrangements don’t have good coverage across the entire facility. By deploying a private 5G network “you close that gap,” he says, adding that by setting up a private 5G network, the service running a particular base can reach every part of the facility, indoors or outdoors, with a robust infrastructure for many different types of communications and data transfers.

Regarding use cases, Vogelsang noted that one possible example might be to control a fleet of drones to run inspections across a large facility. This could be things such as preemptive maintenance or inspecting aircraft wings instead of having personnel physically do the task.

Another possibility is the use of augmented reality—using data and imagery to overlay for a user’s eyepiece or glasses for things such helping with equipment maintenance or other tasks. The use of 5G enabled augmented reality has been shown to dramatically reduce errors while improving speed and efficiency and such capabilities can be applied across the entire government, Vogelsang says.

There are several government pilot programs testing 5G applications. One is an effort where researchers replaced older sensors with 5G-enabled sensors. The original sensors gathered data and stored it in their internal memory, which then required personnel to go out and physically retrieve the sensors to extract the data for analysis. By using networked sensors that transmit data in real time, Vogelsang says it eliminates the need to manually collect data.

The National Spectrum Consortium (NSC) is also running 5G experiments, one of which is built around the concept of dynamic spectrum sharing. Vogelsang explains that it borrows on the concept of the Citizens Broadband Radio Services (CBRS), an industry effort that Nokia participates in to provide enterprises with 4G and 5G networking capabilities.

CBRS makes some spectrum in the 3.55 to 3.7 gigahertz range available for industry and government agency use. This same spectrum band is used by some military radars and the system is set up so that devices using those frequency bands will shut down when they detect radar emissions to prevent interference.

But the new NSC 5G experiment is more dynamic than CBRS in that it will be able to react in near-real time, and instead of shutting down the network, shift to another piece of spectrum to prevent interference, Vogelsang explains.

A more specialized use case involves tactical wireless applications for military and first responders. Vogelsang notes that 5G maps well into user requirements for tactical environments because its cellular-based technology permits broadband connectivity for many more users and devices.

“We think there’s an opportunity to take this to where every soldier, Marine, first responder has a smartphone and they have a broadband connection on that device where they can get situational awareness, can see what’s going on, access live video feeds, and other super powerful tools,” Vogelsang says.

Current wireless technologies can’t do this when used in tactical environments, he adds. Traditional radio communication systems are proven and the government and military will continue to rely on them. But Vogelsang believes that 5G can augment these existing capabilities by leveraging the technologies available to industry.

“That’s really the key. This is technology that’s been paid for and developed by Nokia and our large [mobile network operator] partners. We’re investing heavily in this technology. So, when we bring it into a use case, they don’t have to put up the billions that we’ve invested to develop this technology,” he explains.

One of the challenges in rolling out 5G to government facilities is that agencies aren’t experienced with the technology, Vogelsang says. This means Nokia is figuring out how best to engage the government to help roll out these networks while federal customers learn what’s the most effective for their individual uses.

Vogelsang sees a great degree of alignment between the government and companies such as Nokia and that both parties together are learning how to deploy and use this new technology.

“The end goal here is how do we leverage this massive industrial investment that’s going into the government for government-specific missions and use cases,” he says.

In fielding new solutions, the service is seeing initial success with a spe...