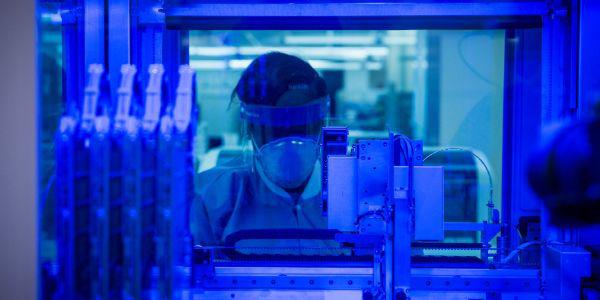 Radio-driven electro-optic sensors, exotic molecular materials and bugs that repair runways are just some of the technologies the Air Force is looking at to help it retain air supremacy in the future. Partnerships with industry and academia are central to this research, but the service is directing efforts to meet goals established in the most recent National Defense Strategy.

In addition to pursuing blue-sky breakthroughs, the Air Force Research Laboratory (AFRL) is exploring new ways of developing technologies. These would accelerate the pace of research in the same manner that acquisition reform would speed up deployment. Both technology enablers and industry partnerships would play a role in this effort.

Timothy J. Bunning, chief technology officer for the Air Force Research Laboratory (AFRL/CZ), sees three technologies as vital to future Air Force missions. The National Defense Strategy pivot mandates a different set of operational forces, and Bunning views one of those needs as attritable and expendable platforms. The Air Force must integrate a large number of diverse, smaller platforms with conventional crewed platforms in a collaborative manner. In turn, this requires wholly new directions on airframes, engines and sensor packages, to name a few.

Then comes networking, which Bunning calls the mesh. This comprises the sensing grid and communications that will need to fill the airwaves around the aircraft.

The third technology element is what he describes as the human-machine interface, which is crucial for more than conventional reasons. “In all of these systems, there has to be trust,” Bunning says. “Trust in warfare, trust in military operations is fundamentally different than trust in a banking system,” he points out. “So how do we get after that differently than our classic command and control perspective from the human?” This may require a human on the loop rather than a human in the loop, he offers, as many elements will be reacting and interacting autonomously.

Some specific technologies stand out. Bunning identifies synthetic biology as one blue-sky technology that could play a significant role in Air Force operations. “Synthetic biology has the promise of really enabling us to produce, design, engineer and manufacture materials completely differently than we have in the past,” he says. A burgeoning group across the Defense Department aims to exploit biological cells for use, he notes.

The AFRL has worked with small companies on using organic bugs and extant materials for novel runway generation. These bugs would interact with the environment, given the right moisture conditions, and perform repairs. The Air Force already has conducted experiments using bacteria to grow a runway.

One advantage of synthetic biology would be to design and fabricate molecules that are difficult and expensive to do from a classic wet-chemistry perspective, Bunning observes. Being able to tweak cellular DNA would allow scientists to program an organism with instructions to perform desired chemistry for generating designer molecules. Many resins currently used to build high-performance composite parts for aircraft are elegant, and the synthetic precursors needed to build them are time-consuming and complicated. Some experts believe that these monomers could be built using synthetic biology, and this could be applied to any discipline that needs materials, he continues.

One of the key Air Force endeavors—Bunning calls it a national endeavor—is hypersonics. The AFRL is conducting research in propulsion, materials, aerodynamics, survivability and command and control technologies. This month, the AFRL is briefing the Scientific Advisory Board on its hypersonic program, which is unusual in that the lab is conducting research across multiple technology directorates. Pulling together that research into a single summation—“herding the cats,” as Bunning analogizes—has been beneficial to the AFRL. The new AFRL senior technical official in hypersonics, James Weber, is convinced that the AFRL has a strong integrated program, Bunning relates.

Ultimately, digital design of systems may have the biggest benefit to Air Force operations, Bunning offers. For both sustainment and repair, digital engineering and its underlying technologies would reach into most aspects of Air Force operations. This includes computational exploration using new techniques such as artificial intelligence (AI) and machine learning (ML). These would enable exploring large swaths of design parameters, composition and flight conditions, which can be used to home in on part of a complicated landscape, he says. Technologies that enable and embolden trust in hardware, software and decision making will be important.

The speed of research holds the key to success, Bunning declares. Current methodologies are based on a science and technology system from 10 to 15 years ago, and the AFRL must accomplish its breakthroughs quicker. “We, as researchers, have to speed up our discovery,” he says. “We have to speed up our development. We have to speed up our design.” In addition to embracing more of a digital design approach, the lab must use modern tools such as topological optimization. It also must exploit novel fabrication techniques such as additive manufacturing/3D printing.

“Those tools weren’t around five years ago,” Bunning observes. “We could completely redesign structural systems in a manner that is new to us. It’s going to change our culture.”

Ubiquitous sensing is another discipline that will improve Air Force operations. Space comes into play in this area, Bunning says, especially as low-earth-orbit satellites proliferate and the commercial space technologies market explodes. “We’re not there yet, but we’re getting better,” he emphasizes. “If you could get to this ubiquitous sensing, you would have enough information at the time you needed it to make a decision. That’s the ultimate in a kill chain,” he says.

This effort begins with linking the sensing modalities that exist today. Then, new sensors will be added to the system as they are developed and implemented. Data will be input into a machine to give the human an integrated view across all of these modalities in real time, Bunning says. Again, this brings into play trust in the information given to the human.

“The world is changing, and the role of an AFRL has to change with it,” Bunning declares. In electronics, AFRL research has a duality with commercial industry. As recently as 20 years ago, the Defense Department led the way in electronics research for the military. But now, as the commercial world has exploded with innovation, the Air Force is serving as an adapter for commercial technologies.

The challenge is to leverage commercial technologies in concert with AFRL research to meet Air Force needs. The lab is exploring how to eliminate hardware and software vulnerabilities, which becomes even more important with open systems and digital designs, he says.

Another thrust is to combine radio frequency (RF) and photonics for wedding the functionalities of both an electronics system and an optical system. The goal would be novel sensing motifs in more integrated photonic systems, Bunning says. This would bring multifunctionality into a sensor suite.

“I still believe we are not at the limit of engineered materials, particularly as it relates to novel electronic gadgets,” he states, citing next-generation superlattice sensing as an example. These are exquisite systems with molecular engineering that will drive performance in ways almost unimaginable 20 years ago, he allows. Much work remains on both the RF and the electro-optical imagery side, he admits.

Machine-led research ultimately could be the key enabler of many advances, he states. Instead of designing a series of experiments from which humans would extract data for analysis in a repetitious loop, AI and neural networks would empower a machine to conduct a series of experiments autonomously. The machine takes the data, analyzes it in real time, taking the human out of the loop to pursue experimentation in an unprecedented scale.

“That’s really an enabler for a research organization like the AFRL as a whole,” Bunning states.

As with other service laboratories, quantum research is in play. Communications and sensing are coming, and the lab is working with other defense laboratories, industry and academia. Instead of trying to own it and run with it, the AFRL is working on growing smart practitioners who can interface with others to provide for Air Force needs, Bunning offers.

This effort shares one trait with many other AFRL efforts in its work with industry, Bunning observes. The majority of AFRL resources go to industry, he notes, as the Air Force buys capability from companies and not from the lab. That linkage can and should continue, as some parts of the lab system will continue this relationship.

He cites the lab’s relationship with Lockheed Martin as a template for a nontraditional government-industry partnership. Where most companies focus their independent research and development (IRAD) for the future three years on building a business case to pursue future government contracts, the Air Force Customer Collaboration Program (AFC2P) has the company investing its IRAD for a longer-term view in conjunction with specific pockets of the AFRL. The lab is putting its own funds into these pockets as it works with Lockheed Martin to help shape a technology area for the future instead of a business opportunity.

“We are in a different fight these days, and industry has to be more of a Defense Department partner going forward,” he warrants. He would like to see more of an interlocked relationship with industry as the AFRL evolves to a greater capability focus.