The service expects significant progress this year.
By George I. Seffers 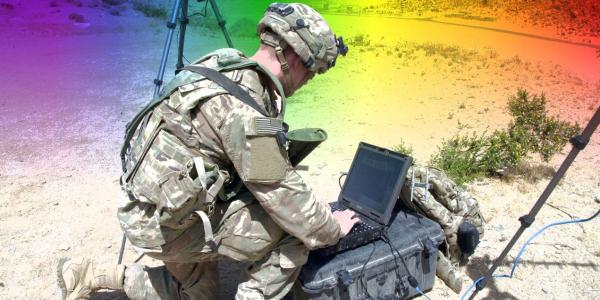 This year the Army will take several steps in the march toward reintroducing cutting-edge electronic warfare systems capable of countering near-peer competitors.

The service already has made progress through its use of rapid prototyping, which will continue in the weeks and months to come. In late 2018, Col. Kevin E. Finch, USA, project manager for electronic warfare (EW) and cyber, along with the Rapid Capabilities Office, won a David Packard Excellence in Acquisition Award for rapidly fielding prototypical EW technologies to Army forces in Europe. An operational needs statement called for tools that would enable ground troops to maneuver freely, even as adversaries manipulated the electromagnetic spectrum and targeted friendly force systems with jamming and interference.

This year, the team should be heading back to Europe to upgrade those capabilities. “As you give soldiers capability, they get very vocal on what they want. So, we took the feedback they gave us on the first round, and we’re going back in the second quarter of this year to field phase two capabilities to European units,” Col. Finch reports. “These are soldiers in areas where they can employ the systems in a more realistic manner than some of our continental United States-based units.” In the third quarter of the current fiscal year, the team will begin fielding equipment to other units under another operational needs statement.

In addition, next month, the project manager could award the first round of other transaction authority contracts for prototypes of the Terrestrial Layer System-Large, which the colonel describes as the first integrated ground signals intelligence, EW and cyber platform that will be in the Brigade Combat Team formation. “We’re actually looking at proposals right now as we speak. If the schedule holds true, based off of funding availability, we’re looking at first units equipped in the first quarter of 2022,” he says. “That’s always subject to Congress providing funds. That’s the one thing we really can’t affect from our foxhole, but it’s hard to bend metal without money.”

The Army also was expected to conduct a flight demonstration in January of the Multi-Function Electronic Warfare (MFEW)-Air Large system, Lockheed Martin’s jamming pod attached to a General Atomics MQ-1C Gray Eagle unmanned aircraft. Additional testing was expected to begin in February. The system is designed to provide the Army with an offensive EW capability and help shape the electromagnetic operational environment. “This will be operated out of the Combat Aviation Brigades,” Col Finch says. “They’re going to be primarily there to provide capabilities down to the brigade combat teams. If you think about a near-peer threat, like an enemy radar system, having something in the air becomes critical just because of the nature of the wave propagation.”

The Army conducted a recent flight demonstration of the system using Lockheed Martin’s Silent CROW open architecture, which can be configured for both airborne and ground systems and could “enable U.S. soldiers to disrupt, deny, degrade, deceive and destroy adversaries’ electronic systems through electronic support, electronic attack and cyber techniques,” according to the company’s website. Col. Finch reports the flight demonstration went well. “From that perspective, we’re very confident with what we’re asking the pod to do,” he offers.

The Terrestrial Layer System-Large and MFEW-Air Large will complement one another and will be meshed together through the Electronic Warfare Planning and Management Tool (EWPMT). The EWPMT, which is being developed by Raytheon, supports the commander’s military decision-making process by providing EW mission planning, targeting, and modeling and simulation capabilities to help develop courses of action. The system also adds the electromagnetic order of battle, deconflicts EW and communications assets, and visualizes or displays the electromagnetic operational environment.

“EWPMT is really the junction box for all of our different systems that we have. It’s pretty difficult to visualize something you can’t see, touch or taste. This tool allows [the commanders] to see what the electromagnetic spectrum looks like in relation to their battlespace,” Col. Finch explains.

The colonel also highlights the importance of the modular open systems architecture commonly known as CMOSS. The complex acronym that takes the “C” from C4ISR—command, control, communications, computers, intelligence, surveillance and reconnaissance—and the “MOSS” from EW modular open suite of standards.

Army officials say the architecture will converge select Army warfighting capabilities, such as mission command, movement and maneuver and fires, into one system. “Today, there are redundant subsystem components; complex, costly and heavy cabling; excessive heat generation; and often limited space on the platform for soldiers,” Jason Dirner, an electronics engineer with the Army’s C5ISR (Command, Control, Communications, Computers, Cyber, Intelligence, Surveillance and Reconnaissance) Center, says in an Army press release. “CMOSS establishes a universal A-Kit that minimizes the need for platform-specific integration.”

Once one or more chassis are integrated on the platform, subsequent capabilities can be fielded as cards, currently the size of a large cellphone, which plug into those chassis without need of any additional cabling or mounts. CMOSS also defines open interfaces that allow sensors, processors and displays to be shared among systems, reducing the challenges of size, weight, power and cost associated with vehicle-based mission command and radio technologies, Dirner adds.

Col. Finch emphasizes the role CMOSS will play in countering adversaries on the battlefield. “Let’s say country X develops a new capability, and we need to integrate that capability into the current platform. We’ll have a CMOSS chassis, and we’ll take a card that has that capability on it and insert it into our system, and the system will be able to perform against that particular target.”

He also cites the work of the Sensor Open Systems Architecture Consortium. The consortium aims to create a common framework for transitioning sensor systems to an open systems architecture based on key interfaces and open standards established by industry-government consensus. It also allows “government and industry to collaboratively develop open standards and best practices to enable, enhance and accelerate the deployment of affordable, capable, interoperable sensor systems,” according to the consortium website.

The consortium announced last summer that it supports a tri-service agreement signed by the secretaries of the Air Force, Army and Navy to use modular open system standards in all requirements, programming and development activities for future weapon systems.

“Ideally, we have a set of standards that we’ll have multiple vendors building to. It provides a forum that industry and the government can go in and give use cases for specific technologies. If we find out we can’t pace the threat with the current standard, we can go in and modify that standard,” he says, adding that solutions will be nonproprietary.

The Army found itself well behind potential adversaries, such as Russia, following years of conflict in Afghanistan and Iraq, which did not require sophisticated EW capabilities. For those operations, limited EW systems, primarily for countering improvised explosive devices, sufficed. But technology and the ability of adversaries to use those technologies have both progressed rapidly since then.

When Russia invaded Crimea in 2014, it demonstrated surprisingly sophisticated EW and cyber capabilities, and Army officials realized they were in trouble. In response, the service moved EW to the top of its list for rapid acquisition and endorsed a new approach that involves rapid prototyping, experimentation and fielding, soliciting soldier feedback and infusing new technology as it becomes available.

But the difficulties of reintroducing the capability go beyond just developing cutting-edge technologies. The challenges run the gamut across doctrine, organization, training, materiel, leadership and education, personnel and facilities, Col. Finch indicates. “One of the big challenges we have right now is that we’re really relearning the craft. A piece of this is just getting the tradecraft back into the force and getting some lessons learned. That not only goes from the electronic warfare soldier side of the house but also to the commander side of the house.”

Brigade commanders today, he notes, were merely lieutenants the last time the Army had significant EW capabilities, so their understanding of what EW provides commanders was “probably about zero back then” because “they were concerned about being platoon leaders of their tanks, not employing EW kit.”

Furthermore, systems fielded for the last war are not well-suited for the next one. “We fielded the right capability for that war. But when it came time to upgrade that system to pace the near-peer threat, they were woefully inadequate in a couple of different ways,” Col. Finch suggests. “We bought systems that were purpose-built, but trying to modify them to pace a near-peer threat is problematic just because of the way that they’re designed.”

He adds, however, that challenges also come with openings. “We’re starting off with a blank canvas right now. With that blank slate, we’re not trapped in the mindset of the past, so it’s an opportunity.”

Ultimately, success in the EW realm may be measured by how quickly U.S. forces can act. “The biggest thing we’re seeing is that he who acts first is usually the winner. Systems providing data in near real time so the commanders can make timely decisions—part of the decide, detect and act methodology—is very important,” Col. Finch states.