Now it’s the protective measures that must stand the rigors of combat.
By Robert K. Ackerman 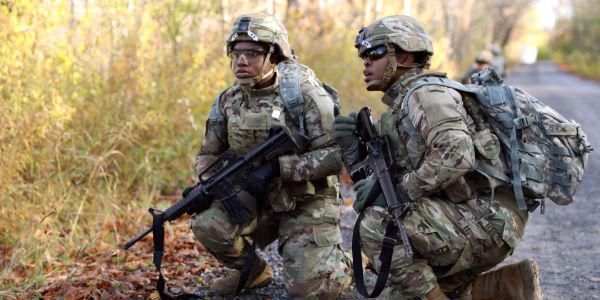 The U.S. Army is developing new materials that can withstand the harshest environmental condition on the battlefield—high-energy kinetic combat. A multipronged research effort at the Army Research Laboratory aims at creating exotic materials that would protect warfighters and their equipment from new kinds of weaponry that are appearing, and may appear, in future tactical combat.

The future battlefield may be harsher from both enemy action and climate. Near-peer adversaries are pushing their own research into deadlier weapon systems against which U.S. forces must defend. Climate changes are leading to hotter desert environments while opening up arctic regions to competition—and potential conflict in the harshest of cold conditions.

The U.S. Army Combat Capabilities Development Command’s Army Research Laboratory (ARL) is focusing on extreme environment materials in three categories, explains Sikhanda Satapathy, Ph.D., collaborative alliance manager for Army Materials in Extreme Dynamic Environments (MEDE) Collaborative Research Alliance program at the ARL. The MEDE program includes a university consortium led by Johns Hopkins University. These categories—metals, ceramics and composites—offer a host of new possibilities for personal and vehicle armor. Ultimately, research conducted in any of the categories may cross domains and lead to advances in the others.

This research is driven both by specific applications and by the art of the possible, Satapathy offers. Many of the pursuits are goal-oriented, but the basic research probes new avenues of material development. The laboratory builds both applied and basic research goals around emerging and predicted threats, he notes. Its efforts are aided by industry and academia, along with resources available in national laboratories, particularly high-performance computing such as in the Defense Department’s High Performance Computing Modernization Program. And it is employing artificial intelligence and machine learning to help discover new materials.

Satapathy explains that the ARL is working on materials that can withstand the operating environment of military conditions—high pressure, high stress, high strain rate—as opposed to the more benign environment of the commercial sector. Global environmental changes are also affecting armor development. Satapathy points out that body armor must withstand the temperature extremes that soldiers will encounter, whether in the hot desert or the frigid arctic. This issue applies to vehicular armor as well, as some composites may lose their best properties at extreme temperatures, and metals can undergo property changes along with the existing temperature.

But the stresses brought on by the natural environment pale in comparison to those of the battlefield, Satapathy emphasizes. The high-pressure, high-strain conditions introduced by weaponry are not found in common material applications such as bridges and skyscrapers. High-velocity projectiles impacting on armor generate pressure exceeding the strength of ordinary materials by several times, he says.

One key characteristic that must play in any new protective materials is weight. The ARL is looking to lighten the load that soldiers carry, and it doesn’t want heavy armor weighing down ground and aerial vehicles, costing them mobility and fuel efficiency. So the new materials must be able to survive these extreme conditions at minimum weight, Satapathy emphasizes.

Within each of the three classes, the ARL has identified materials within their science base to build new substances. These efforts range from molecular scale to mesoscale and macroscale, Satapathy says. Exotic works study multiple time scales where the atoms and molecules operate in nanoseconds up to microseconds, where laminates operate.

In metal research, the ARL’s focus on weight comes to bear. The laboratory is working with magnesium, which is one of the lightest structural metals available. But it cannot compete with metals such as steel or aluminum because of lower strength and inherent failure mechanisms. The laboratory is identifying those failure mechanisms and working to ameliorate them, Satapathy says.

For example, a sheet of magnesium will shed a piece of material when it’s struck by a projectile, which doesn’t bode well for its use as armor. ARL researchers are striving to understand the metal’s characteristics that allow for this type of failure, and then they would redesign the material and its processing. Demonstrations have shown that different manufacturing processes can improve performance by at least 10 percent, he relates.

Another thrust is to create an entirely new alloy in which other elements are added without significantly changing the weight. This approach aims to prevent the material failure process—a piece blowing out the back. After finding an acceptable alloy, the laboratory still must determine how to process and manufacture the new material effectively, Satapathy says.

Some work focuses on making a magnesium alloy strong enough to avoid its failure pattern. Depending on the nature of this magnesium alloy, it might be combined with other conventional materials. He continues that what the laboratory is learning in its work with magnesium will be applicable to other metals research such as aluminum and steel.

So, the laboratory is working  in collaboration with Johns Hopkins and Rutgers University with boron carbide as a candidate ceramic material. Among its failure mechanisms is an amorphous shear tendency in which the crystal integrity of the material is lost. The ARL research team is looking at using molecular materials that strengthen the crystal structure.

One such approach is to dope the boron carbide with silicon, and the laboratory has found it reduces the amorphization problem. Unfortunately, the material’s strength also suffers, Satapathy says. So, researchers went back to the laboratory to look at another potential additive, titanium diboride, to add strength to the silicon-doped material. The next step would be to scale up production of this new material for larger samples.

“We are developing the science, we are making new materials and also we are creating the next [generation scientific] workforce—people who will be solving our problems in the future,” he states.

In composites, the ARL is working with the University of Delaware, which is looking at a glass-epoxy composite. Again, these researchers are examining the material’s failure modes. These composites are built around fibers surrounded by matrix materials in layers. The scientists at Delaware are working on individual fibers with modeling at the molecular level, Satapathy reports. One of their findings is that coating the fiber chemically can prevent the failure of the fiber. Also, interface material between the fiber and the matrix material can improve bonding, increasing composite strength.

This team has come up with a new chemistry by adding small amounts of different materials, he continues. With these combined advances, their composites are stronger. The ARL is working with industry on production processes that would permit larger pieces of composite material for testing.

New composites would be used in current applications such as helmets and body armor as well as in vehicles as protective structures, Satapathy offers. Ceramics would provide similar protection at a minimum weight, which would be especially useful for individual soldiers. Metals primarily would be protecting vehicles, particularly against improvised explosive devices (IEDs) and tank rounds.

Soldiers must be protected against small arms and blast effects, while ground vehicles must be safe against IEDs and warheads. Their defense features different time and energy parameters, Satapathy notes. “You want to stop the threat with the lowest possible weight,” he states. This becomes especially vital as the force strives for greater mobility.

The research in these three areas is not limited to the specific disciplines. Combining different materials is atop the ARL’s list for materials research, Satapathy says. For soldier protection, the lab uses multiple materials, such as a ceramic plate backed by a composite panel. In this case, it is vital to understand the response of the system, he notes, and in many situations one type of material perfectly complements another.

And these combinations can be varied to emphasize different strengths. If designers are striving for resistance as opposed to stiffness, a composite and a ceramic can be combined to achieve the optimum effect. “Each of these class of materials has its own advantages and capabilities to blunt or absorb the energy of a projectile,” Satapathy points out. “One could design an armor system taking advantage of these three types of materials.”

Threats are becoming more dangerous, with near peers and other adversaries advancing their weaponry. Satapathy allows that the ARL is working to defeat both upcoming threats and new ones that may lie over the horizon. “For some things, we have to start now. We cannot wait until those threats show up in the theater 10 years from today,” he warrants.