Partnerships with key allies will bring advanced military capabilities to the nation.
By Kimberly Underwood 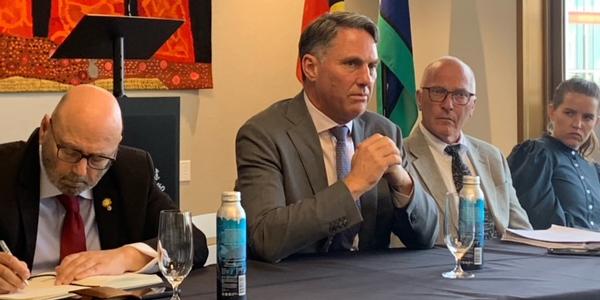 Richard Marles (c), deputy prime minister of Australia and their minister of defense speaks at the Australian Embassy on July 14 about the new government’s plans to strengthen the AUKUS alliance with the United States and the United Kingdom to increase technology collaboration.

The new Australian government, led by Prime Minister Anthony Albanese of the Labor Party, who took office on May 23, 2022, is continuing to pursue important military technology exchanges with key allies. Under the so-called AUKUS trilateral security agreement with the United States and the United Kingdom, Australia is progressing in its effort to field a nuclear-powered submarine, to begin to replace its cadre of 30-year-old, Australian-built, Collins class, diesel-electric submarines currently in operation, reported Australian Deputy Prime Minister Richard Marles. Put in place last September with the two allies and the previous Australian government under Prime Minister (PM) Scott Morrison, the AUKUS agreement will continue to be a priority under the Albanese government.

The country will announce in the first quarter of next year which nuclear platform it will select from the AUKUS partners, said Marles, speaking to journalists in the Defense Writers Group during an event at the Embassy of Australia in Washington, D.C., on July 14. The deputy prime minister sees the agreement as a way to streamline capability collaboration between the three countries. Marles, who also is the country’s minister of defense, was part of the new Albanese government’s first ministerial-level visit to the United States last week.

“We’ve talked about how we can have our defense industrial bases operate in a more seamless way,” Marles said of the U.S. meetings. “And the AUKUS process that we are going through [with the nuclear submarine selection], we’ve obviously wanted to touch base on that and make sure that it is all on track, and it is, with the view to us making announcements in the first quarter of next year about exactly what platform we will go with and how we will navigate the journey from 2023 to whenever we are able to get the first nuclear power submarines in the water.”

The deputy prime minister noted that they are considering a range of specific options in the nuclear-powered family of attack submarines in the United Kingdom and the United States, as well as how to address any capability gaps until they receive such a submarine.

“We are busily whittling that down to a point of making decisions through the course of this year,” he said. “That is essentially reiterating what was announced by the former Australian government. In addition to that though, what I’ve sought is to look at every way in which we can speed the delivery. And it will not just be about announcing which submarine. We will be talking about when that submarine will be in the water and to the extent that there is any capability gap that arises as a result of that timeframe, what is the solution to plugging that gap…. It is critically important that we see through this decade and the 2030s.”

Australia will examine hardware-related issues about how to support the advanced submarine and any personnel considerations, putting “mechanisms in place in which to grow a submariner base to operate the subs going forward.”  Extending the life of the Collins submarines is also part of the plan, Marles explained.

However, the controversial way in which PM Morrison canceled Australia’s contract with France to obtain nuclear-powered submarines would not be how PM Albanese’s administration plans to act in the future, he ventured.

“This is a matter that played out pretty significantly domestically in Australia, since the decision was made to end the contract with France really right through to the election in May,” the new deputy prime minister said. “We intend, as a new government, to engage with the world very clearly and plainly and honestly. We will pursue Australia’s national interests in what we seek to do. But we will do so in a way which builds the relationships we have with countries around the world with a straightforward, honest way of doing business. That is how we are going to operate.”

For the Albanese government, “it has been very important, we feel, to reach a settlement with France so that we can put a line underneath that episode and move forward,” Marles stressed. “Because France matters. France matters to Australia.” In fact, one of the country’s closest maritime neighbors is New Caledonia, a sovereign state of France, located about 750 miles off Australia’s eastern coast.

And although selecting and then fielding the nuclear submarine capability is the main focus right now, Marles noted that Australia will pursue other key emerging technologies under AUKUS, such as hypersonics and electronic warfare, including under possible bilateral pursuits with either America or the United Kingdom.

In addition, Australia has made a strong stand with Ukraine. PM Albanese attended the NATO Summit in Madrid last month to discuss the war. And Australia is the largest non-NATO country contributor to Ukraine, providing $400 million Australian dollars in assistance for Ukraine’s defense against the unprovoked Russian invasion, Deputy Prime Minister Marles noted.

“The reason that we have done that is because we see that the conflict does raise issues of principle that not only apply in Ukraine but apply everywhere and in the Indo-Pacific,” he said. “Principles which engage our national interest. That is why we are there. So, we see this has significance on a global scale and to our region. The global rules-based order, which began at Bretton Woods and built by the United States and Australia and many other countries …. were put in place so that countries could, after the calamity of two world wars, resolve issues by a system of law and a system of rules rather than by reference to power and might. What we’ve seen by the invasion of Russia in Ukraine is absolutely an attempt by Russia to operate on the basis of power and might. That can’t be allowed to stand.”

Australia’s second-in-charge shared that the country is watching China closely, especially its recent step of having the Solomon Islands sign a sweeping security agreement, a move that heightens near-peer competition. “China has had a presence in the Pacific for a long time,” Marles stated. “We understand that, and we understand that the countries in the Pacific have a right to make their own choices about the relationships that they enter into. That said, the security agreement between the Solomon Islands and China really was a step further down the path of strategic competition.”

“We would also note that if that were to occur, that very much changes the national security framework for Australia,” Marles emphasized. “Going forward, the countries of the Pacific are going to seek to make their relationships with a whole range of countries. What is important from the perspective of Australia, and working with the United States, it is that we are earning the right to be the natural partner of choice for the countries in the Pacific.”

The deputy prime minister was buoyed by the U.S. meetings this week and the allies’ steadfast partnership, stating that “as an incoming government, our starting point was to affirm the importance of the alliance in Australia’s world view and importance in our national security,” Marles stated. “The global rules-based order is under pressure now in a significant way as we’ve perhaps seen since the end of the second world war, and in this moment to have a sense of shared mission and to be projecting forward with a sense of team is really important. That is part of what we’ve been seeking to express with the U.S. government. And we’ve really felt that reciprocated in all of the meetings we’ve had [with the secretary of defense, the national security advisor and senior members of the SASC] is a real sense of shared mission in the moment between Australia and the United States.”

In addition, the Quad agreement with India, Australia, Japan and the United States will help provide stability. “The Quad agreement is four like-minded countries engaged in the Indo-Pacific, who support a global rules-based order and who seek to promote the prosperity that the global rules-based order underpins for democracies,” Deputy Prime Minister Marles stated. “Its agenda is around how we can work together to encourage prosperity in the region. Initiatives, for example, around maritime domain awareness in terms of deterring illegal fishing. When you think about the countries in the Pacific, for example, their exclusive economic zones are one of their main assets.”

He added that the Albanese government “thinks it is a really important development. We are committed to it, and the other countries that are part of it share that commitment. In the last seven weeks, since we’ve come to power, I’ve now done a visit to every one of the Quad members.” 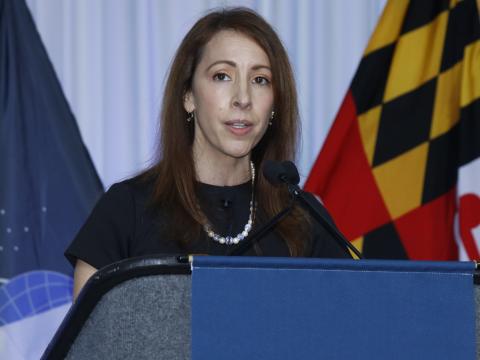 Technology modernization can be grueling, but it is a vital endeavor for co...