Battling on the Arctic Edge 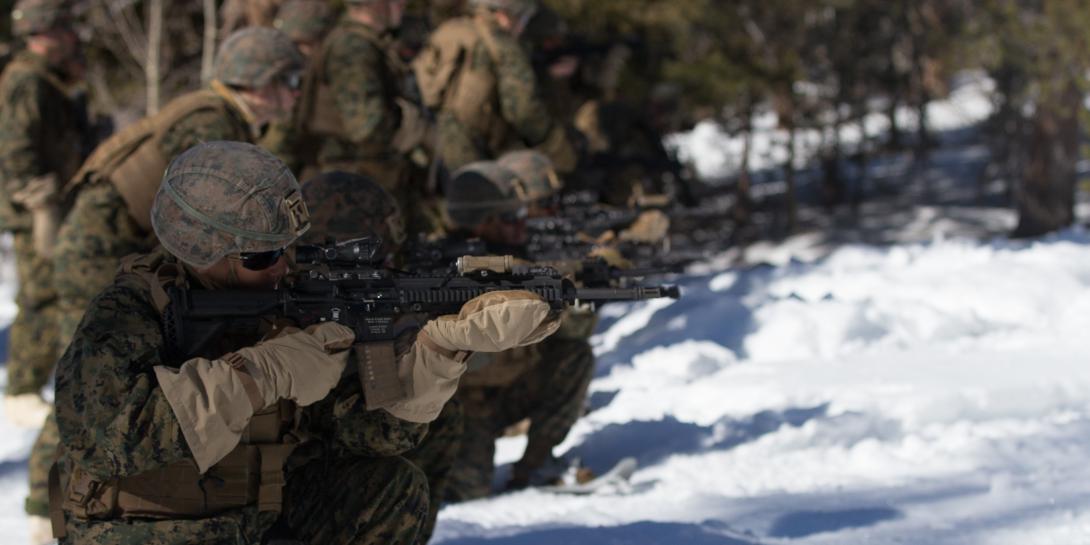 Over the past several years, the U.S. military has focused on growing its cold-weather operation capabilities. The U.S. Marine Corps, through host and NATO ally Norway, has maintained a presence in the region to train and develop the skills necessary to operate in extreme conditions.

Given adversarial threats in the Indo-Pacific region and Europe, especially from Russia and China, the Arctic region’s strategic importance is increasing. The National Defense Strategy and the 2019 Defense Department Arctic Strategy further set the stage for Arctic operations in the high north. According to the Defense Department, these strategies embrace a “secure and stable region where U.S. national interests are safeguarded, the homeland is protected, and nations address shared challenges cooperatively.”

In late October, the next contingent of Marine Corps warfighters deployed to Setermoen, Norway, for cold-weather training in the high north. Approximately 350 Marines and sailors of the 3rd Battalion, 6th Marine Regiment, will train with and learn from the Norwegian Army during a two-month training deployment.

After a quarantine period at their training location in Norway to mitigate the risk of COVID exposure and transmission, the Marines will conduct bilateral arctic warfare training alongside Norwegian allies to improve interoperability and strengthen defense capabilities.

“Norway offers challenging terrain and unique training opportunities to improve our cold-weather and mountain-warfare skills, enabling our force to fight and win in arctic conditions,” says Lt. Col. Ryan Gordinier, USMC, commander of the battalion. “The ‘Teufelhunden Battalion’ looks forward to continuing our historic relationship and strengthening our alliance with the Norwegian military.”

Warfighters with MRF-E will continue to deploy Norway’s Arctic Circle several times over the coming year; a larger follow-on rotation is scheduled to deploy in early 2021.

The Marines’ work with the Norwegian Army will allow for more operational flexibility, Col. Gordinier states. In addition to strategic warfighting, the goal is to address power, water supply, communications and cold-weather gear issues not only to survive but also thrive in the extreme conditions, he indicates.

“When you are dealing with 10 to 15 feet of snow for multiple months, and that is where you are existing, you have to learn to not just to make it through but also make it through in a way to where any of your adversaries would have to try to come into that environment to try and get to you,” the colonel says. “And that becomes your primary weapon.”

In preparation, the battalion attended mountain warfare training and an exercise in Bridgeport, California, in January and February 2020, focusing on individual and collective movement techniques, survival, command and control approaches, and other warfighting capabilities at altitude.

Near Bridgeport sits Mount Patterson, a 11,673-foot peak, along the Sweetwater range that straddles the California-Nevada border. During the exercise, the Marines quickly found command and control challenges; while they usually they depend on very high frequency (VHF) communications, the option was not effective in that environment.

“At altitude, in that range, when dealing with cross compartments and what we call danger areas—basically the large canyons and valleys—the VHF range does not work,” Col. Gordinier notes. “And because of the geography, it is hard to install retransmission sites in order for VHF to be the primary means of communication. So, we are forced to use HF [high frequency].”

In Norway, the battalion will test several means of communications. “You have to prepare multiple different pathways and then troubleshoot them to find which pathway is working at the time and place that you need it,” the colonel shares. “That is what is dynamic in a mountainous environment. And with the terrain in northern Norway, because of the paths of the satellites, it is even more difficult in the Arctic because of where the satellites pass. So, what that means is an increase in other methods, including the use of HF.”

To read more about the military’s preparation for extreme weather operations, read the article in SIGNAL Magazine’s December issue, available next month.