An array of advanced troubleshooting and analysis tools is keeping globally deployed U.S. Marine Corps command and control systems up and running. Providing these applications is an organization dedicated to maintaining equipment and networks through activities such as offering help desk services, qualifying new equipment and software to meet military standards, and integrating systems into new operational architectures.

The Marine Corps Tactical Systems Support Activity (MCTSSA), Camp Pendleton, California, is part of the military’s ongoing effort both to maintain and enhance its command, control, communications, computers, intelligence, surveillance and reconnaissance (C4ISR) infrastructure. A sector of the Marine Corps Systems Command, MCTSSA is responsible for supporting the service’s requirements through troubleshooting and integration capabilities. The activity is divided into three divisions responsible for providing different facets of Marine Corps C4ISR support.

The mission of the Operating Forces Support Division (OFSD) is to service Marine Corps C4I systems through its Tactical Systems Support Center and personnel embedded in deployed units. According to Lt. Col. Brandon F. Johnson, USMC, the division’s director, the center operates on a 24-hour basis as a help desk and troubleshooting service for warfighters. Staffed by technical experts and rated as a Tier 2 support center, it uses trouble-ticket managing technology to direct and answer incoming telephone and e-mail requests. The center can be reached via a 1-800 telephone number and through online resources such as chat rooms. The colonel notes that in 2004 the center received some 4,300 trouble tickets.

Col. Johnson maintains that the OFSD is fully integrated into MCTSSA, providing support to more than 64 different C4I systems and applications. “We leverage the $100 million infrastructure and engineering expertise at MCTSSA. We provide the function of recording problems with systems in the operating forces, and we feed those back to the program managers,” he says.

Another important feature is the embedding of personnel in deployed units. These individuals and teams are mainly active duty Marine Corps C4I systems experts. Occasionally, support units also include civilian government staff and contractors operating under the technical support to operating forces (TSOF) requirement, which is a contract that allows the Marine Corps to use civilians to fill gaps in critical skill sets. Although MCTSSA has provided on-site support for exercises and operations for many years, the process of embedding teams only became formalized in the last four years, Col. Johnson explains.

Ongoing operations such as Iraqi Freedom have caused MCTSSA to be more proactive in supporting deployed forces. An important feature of this service is helping units establish C4I networks during a replacement cycle when a deployed Marine unit returns home and its replacement arrives. The colonel notes that his command currently has a team of nine support personnel deployed in Iraq to help facilitate the turnover between the incoming II Marine Expeditionary Force (MEF) and the departing I MEF. The increased wartime tempo has reduced the lead time available to support Marine Corps operating forces, making rapid on-site support critical.

Other factors affecting the OFSD are technological changes such as the drive to further integrate C4I systems, which creates problems when equipment and software are linked. Col. Johnson explains that his command is meeting this challenge by hiring technical experts knowledgeable in multiple domains and by replicating and solving integration problems in a troubleshooting laboratory. A third facet to these support capabilities involves building relationships with other organizations, such as contractors and government agencies, he says.

The OFSD’s support center uses several tools to help solve its customers’ system problems. An online solutions database is available via the center’s Web home page. Each solution undergoes a quality assurance process to ensure that it is unique, fully documented and repeatable before it is stored in the database. Software programs and patches also are available for downloading from the center’s home page.

Accessible via the secret Internet protocol router network, the system provides documentation for specific C4I systems. “We found that warfighters usually want to try to solve a problem first or at least to understand it before they talk to somebody, so they will seek out documentation,” the colonel says.

Deployed Marines also can access a virtual modeling capability. For example, a unit may have a network that cannot be modified because it is supporting a mission. But commanders may need to know what the possible effects might be of changing its configuration for an upcoming effort. The center’s bandwidth-sensitive tools can emulate specific networks and model changes before they are loaded onto the existing system.

Another capability provided by the center is shadowing. This application allows a MCTSSA analyst to access a computer or system remotely to see what a user is experiencing. The analyst also can take control of the user’s cursor to walk him or her through a solution or demonstration.

The OFSD faces several challenges such as optimizing limited personnel resources to focus more effectively on interoperability and integration issues, Col. Johnson says. Integration issues can range from single system software deficiencies to hardware failures. Problem software and equipment are sent back to program managers, who then contact the appropriate contractor or manufacturer. “The system works as designed; the person has the training for it but is not able to make it essentially pass or receive information from an adjacent system or part of the network and therefore is unable to use its full capabilities. We tackle those [issues] with zeal because those issues are the most critical,” the colonel maintains.

At the strategic level, Col. Johnson believes that MCTSSA’s support mechanisms must be institutionalized within the Marine Corps. He notes that the OFSD is actively lobbying program managers to consider MCTSSA’s capabilities to further promote integrated support as part of their systems design. But to carry out this strategy, MCTSSA must be included in the acquisition strategy or must become known to program managers earlier in the process. “This allows us to leverage the existing infrastructure that the Marine Corps has already paid for. So their [program managers’] cost is reduced. They can reap the benefits of the flexibility offered by TSOF and other capabilities that we have so that we can tailor support to match a system’s life cycle,” he says.

Systems integration and coordination constitute another of MCTSSA’s major responsibilities. The goal of its Systems Engineering and Integration Support Division is to ensure that software and hardware interoperate when combined in a network. But coordinating different systems is difficult, explains William Neighbors, Marine Air Ground Task Force C4ISR applications lead engineer. He notes that MCTSSA’s basic mission has changed radically since 1995. Before then, the organization’s primary functions were supporting and maintaining the software operating on Marine Corps tactical systems. In 1995, the Marine Corps decided that this was not cost-effective, and MCTSSA became an integration agent.

But bringing different vendors, contractors and programs together and coordinating them remains a major challenge. “If this were a technical problem, it would be almost easy. But the fact of the matter is we’re always trying to hit a moving target,” Neighbors says.

Prior to 2001, MCTSSA relied on an ad hoc system that quickly became overwhelmed by requests for changes because one alteration cascaded into the next system. Without any central oversight, it was impossible to manage the implementation process. Neighbors was tasked with bringing this under control. In 2001, he created an integration management structure based on control gates. At each step in the process, all of the participating parties must agree to meet specific benchmarks as well as to a variety of guidelines concerning testing, systems synchronization and documentation before proceeding. Neighbors notes that it is difficult to get program managers to agree on specific software sets because a new version is always in development. But the control gates are designed to prevent the chaos caused by unexpectedly introducing a new software version into a network. Each step in the process is recorded, and individual system tracks are charted and tested to determine whether any fields or parts of the architecture were dropped during the program’s progression.

Toward the end of the integration process, after all the participants have agreed to specific test and evaluation procedures, a dry run of the architecture is launched. This process is an opportunity to find any defects that might crash or compromise the system. Neighbors notes that even with all of the previous steps, new problems are always exposed once software and equipment are linked. “There is always one system that doesn’t talk to another system the way that the designers intended,” he observes.

At the end of the formal evaluation, a test report is written about the architecture and its suitability for use by the operating forces. Neighbors notes that, like the dry run, the formal test always reveals flaws in a system. Stakeholders must then decide whether they want to conduct regression tests to address any flaws. Once these issues are resolved and a final evaluation is presented, the report is passed to the customers to decide whether to field a baseline architecture, and the process begins again.

Although this framework has greatly improved MCTSSA’s ability to integrate tactical systems, the development process is still difficult, Neighbors says. While computer and software systems have improved during the past 15 years, he maintains that in the past three to four years, the development of interoperable equipment and software has improved little. “We’re still having too many problems in the dry-run phase. There are always a lot of things that need to be corrected before we go to formal evaluation. If things were genuinely getting better and interoperability was smoother out of the box, we’d have less hassle at the beginning,” he says.

The main source of these difficulties is a lack of documentation outlining the interface requirements for one system to communicate with another. Developers often provide MCTSSA with the software before any documentation is ready, Neighbors explains.

The division’s mission is to determine whether a system meets Marine Corps operational requirements. The captain explains that one of the PSD’s responsibilities is to support a system from its inception throughout its service life. The division also tests new versions of a technology as they become mature enough to field.

The captain adds that keeping up with new technological developments and applying them to Marine requirements continue to be a challenge. He notes that warfighters sometimes wonder why MCTSSA cannot keep pace with private industry, but he explains that commercial systems do not have the same life-or-death requirements of military equipment and software. “They [warfighters] don’t understand why we can’t move as quickly. It’s because we have to protect their lives. The primary, critical concern of our mission is ensuring that these systems aren’t going to jeopardize Marines’ lives because they [Marines] depend on them in combat,” he says. 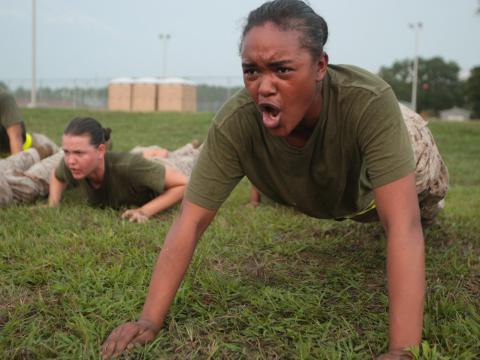 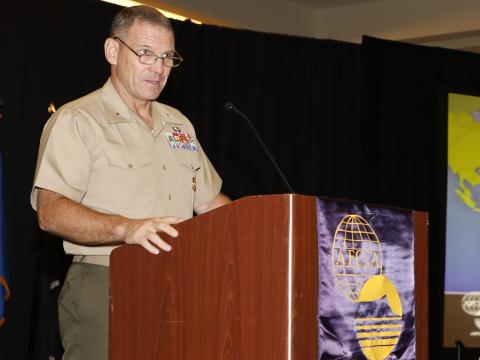 The transforming Corps is turning to technology enablers.