The outgoing leader of the Defense Information Systems Agency shares her reflections.
By Kimberly Underwood 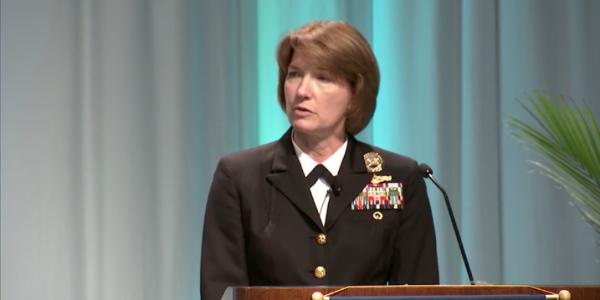 The cybersecurity problem is not going away for the military, warns retiring Vice Adm. Nancy Norton, USN, pictured at the AFCEA Defensive Cyber Operations Symposium in Baltimore in 2018.

During a career spanning 34 years that involved applying information technology (IT) for the military, one of the biggest hurdles was advancing change. It is not only the challenge of providing effective and cybersecure new solutions, but is the combination of that while altering the culture and shifting processes for the better, said Vice Admiral Nancy Norton, USN.

Lt. Gen. Robert Skinner, USAF, arrives at the helm of DISA, following the change of directorship and change of command ceremony with Adm. Norton this afternoon.

“I would say probably the hardest thing is just understanding how best to adapt to change,” said the admiral during a media roundtable yesterday. “In the IT profession, we live with change because technology is changing constantly. And it is learning how to use the technology in a way that makes us more effective and efficient and doesn't increase our cyber security risk. And embracing that change with cultural change and process change, that's really hard.”

Armed with two advanced degrees, a master of science in computer science from the Naval Postgraduate School and a masters of arts degree from the Naval War College, Adm. Norton built the knowledge needed to steer the necessary communications, networking and digital solutions to the Defense Department—aided also by her operational experience. Among other positions, she was the director of the Command, Control, Communications and Cyber Directorate for the Pacific Command; director of Warfare Integration for Information Warfare; and the vice director at DISA.

During her tenure at DISA, the agency has evolved, Adm. Norton said, especially in regard to how it serves its mission partners. The admiral made it a key focus to understand how best to meet the needs of its customer core that spans the services, the U.S. Combatant Commands, top military and White House leaders, and support agencies.

“We are always focusing on our mission partners, their mission and helping to understand what it is that they need in order to be successful,” Adm. Norton said. “For example, we have field commands and field sites with each one of the combatant commands. We are co-located, with an 06, a captain or a colonel that is part of that field office. I tell them and the combatant commanders that I have a global view and have to look across all of the combatant commands, services and agencies all of the time, but that each of those sites can be a step on that geographic or functional combatant command’s requirements and understand what their priorities are and what their missions are. Then they can be that interface back to the headquarters and the rest of the agency in terms of what is required to support that mission,” the admiral added.

That interface with mission partners helps illuminate the total enterprise services that are common across all areas. It has helped DISA define the expense drivers and decrease costs of adding technology as well as provide technology and services faster. “And I think that's really helped us not just deliver better, but helped us to become much more of a trusted partner,” said Adm. Norton.

And it is these efforts that makes DISA unique as a combat support agency, the admiral continued. “The reason why we were stood up [in 1991 from the Defense Communications Agency established in 1960] was because we needed a joint organization to focus on joint interoperability across the services, and not those unique stove-piped capabilities that were optimized only for a service and a domain and were not for the joint force, because how we fight now [is with a joint force],” she stated.

Adm. Norton warned that cyber threats will continue to be a major problem for the military. “It is very difficult to pace the threat in cyberspace, because it is complex, because the technology is changing and rolled out very rapidly,” she stressed. “And we have a very heterogeneous environment across the DOD and so there's a lot that we have to be constantly watching.”

Moreover, cybersecurity threat awareness, for the nation as a whole, has to greatly improve. “The bottom line is that cyberspace is a dangerous place,” Adm. Norton emphasized. “It is hard work to keep our networks safe and secure and that is not just DOD networks or government networks, but that's everything that we do as a society as we rely on cyber and the capabilities that it affords us. As a culture, I think that we are not very good at understanding the risks that we're living with. You’ll see a cool new app on your phone and you download it without even thinking about what it's going to do and how it's taking your data and who it is giving your data to and what access it might be providing to anybody. You have no idea,” she said.

In addition, the admiral served on the staff of the commander of Naval Forces Europe and the U.S. 6th Fleet. However, it was her position as a communications officer for commander of the Cruiser Destroyer Group 12, aboard USS Enterprise (CVN 65), that presented the most indelible experiences during 9/11, she said.

“I was deployed on the Enterprise on 9/11 and I watched on TV the second plane hit and we had just left the Arabian Gulf two days earlier,” Adm. Norton explained. “We were supposed to be heading home, heading South to go around Africa. I saw that plane hit and I knew that things were changing. We didn't have any idea at that point if it was a terrorist attack but I knew that something bad had happened to our nation. We started heading back up the North Arabian Sea to be prepared for whatever was going to happen. The motto of the Enterprise Strike Group was ‘ready on arrival’ and that was very apropos because we were already there, we were ready and we were in the right spot to conduct the first strikes into Afghanistan. On that very first day we recognized that the Strike Group that was supposed to relieve us was actually going to join us and in a couple of hours we had to change all of our communications plans to figure out how to allocate the right communications channels for all of the ships because we were going to be sharing instead of handing them off. So, very quickly we had to adjust to new situation that we were in.

“It has been a really wonderful amazing three year tour as the director of DISA and the commander of the JFHQ-DODIN,” she concluded. “I have loved every minute of this position. It's an amazing opportunity to lead such a fantastic group of people in all of the important missions that we conduct and that we support across the DOD,” the admiral said.