The Defense Department's enterprise strategy is to outsource to the commercial cloud for a variety of capabilities.
By Beverly Cooper 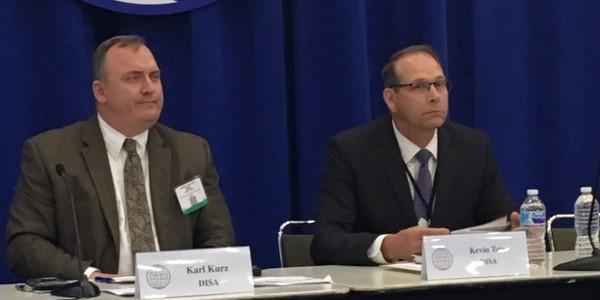 When the Defense Enterprise Office Solutions (DEOS) request for quotes was released last month, it gave industry a way to leverage a variety of cloud solutions in support of defense missions. The goal of this enterprise cloud strategy is to help the Department of Defense (DOD) standardize, centralize and save money, as well as to enhance DOD capabilities. It is a path toward a multivendor, multicloud environment, according to Kevin Tate of the DOD Office of the Chief Information Officer.

Tate was joined by Karl Kurz, DISA Unified Capabilities Portfolio, to provide a briefing on DEOS and its overarching Enterprise Collaboration and Productivity Service (ECAPS) during AFCEA International’s TechNet Cyber conference in Baltimore.

ECAPS is the governance structure that will lead the DOD to outsource enterprise cloud services for certain capabilities, Kurz explained. DEOS is the first of three capabilities sets that will be part of the ECAPS strategy.

Having the DOD maintain hundreds to thousands of server rooms results in many issues, including cost. If the department can offload to more standardized and centralization, such as with commercial cloud, then the department can leverage economies of scale that come with that outsourcing, Kurz said.

“With each command having its own boxes to maintain, you greatly increase the attack surface that the opposition has,” he warned. Industry is moving away from installed applications and application keys in favor of a subscription service where you pay on a set rate or pay a premium for extra services,” Kurz added.

ECAPS strategic goals are fourfold: to advance and evolve the DOD enterprise to support effective productivity across all mission sets; to implement a standardized set of capabilities that allow ubiquitous access and freedom of movement within and across all DOD enterprise organizations and security boundaries; to provide dynamic information access; and to guide consistent, continuous and efficient acquisition and implement agile capability insertion.

As the DOD begins the process to transition to DEOS in 2020, “We need to figure out the way to harness the power of information and do the analysis so commanders in field can make quick, smart decisions to influence the mission,” explained Tate.

The department has been challenged by being hardware intensive with an infrastructure built with data silos. As time has progressed, it has been difficult to update and upgrade, he stated.

DEOS is a fit-for-purpose cloud, which is aligned to the software-as-a-service subscription increasingly favored by industry. This will enable the DOD to offer software as a service on the Nonclassified Internet Protocol Router Network and Secret Internet Protocol Router Network, commonly known as NIPRNET and SIPRNET, both inside and outside the continental United States in support of the tactical, disconnected user, Tate related.

The benefits of the cloud include seamless collaboration, the ability to do rapid security updates, greater visibility on cost and resources, and the ability to reallocate sources where they are probably more needed, such as for cybersecurity and mission.

Functions of DEOS, which is ECAPS capability set one, include a productivity suite, messaging, content management and collaboration. Capability set two incorporates video and voice, and set three brings in assured command and control video and voice.

The DEOS contract is being managed by the General Services Administration, which is allowing 30 days for industry submissions. Source selection will begin after the last submission date, with final decisions expected during summer 2019, with the exact date dependent on the number of submissions that need to be reviewed.