The service directly commissions lieutenant colonel and colonel.
By George I. Seffers 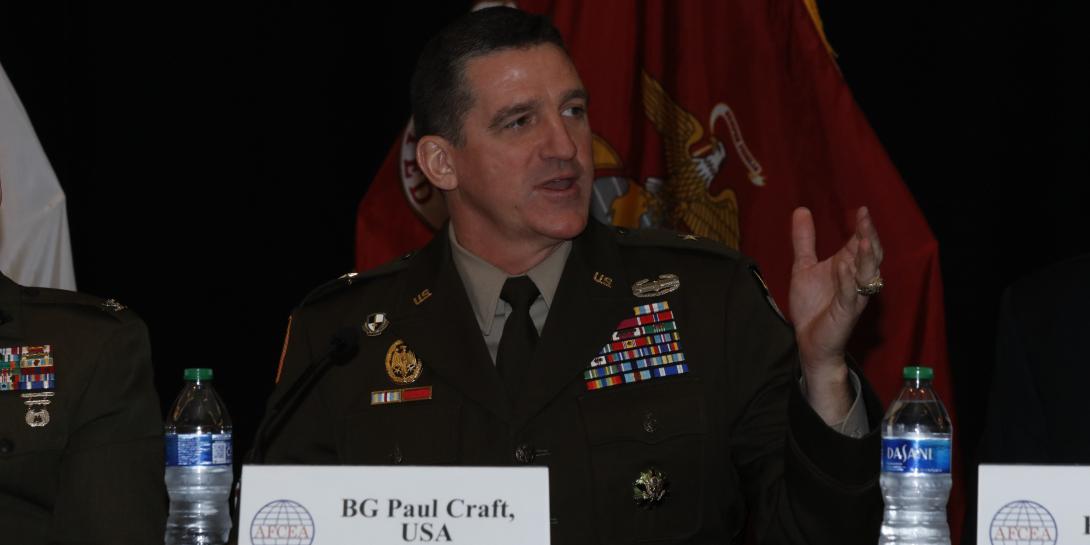 The U.S. Army in the past 30 days kicked off 10 Junior Reserve Officers’ Training Corps focused specifically on students interested in cyber careers. The service also has offered the first direct commission to a lieutenant colonel in the cyber realm and will soon do the same for a full colonel.

Brig. Gen. Paul Craft, USA, commandant, U.S. Army Cyber School, told the audience at the AFCEA Cyber Education Research and Training Symposium (CERTS) in Augusta, Georgia, that the new Junior ROTC efforts are important for the Army and for the nation. “That’s a big thing for the U.S. We now have multiple focused Cyber Junior ROTC programs in our nation, and they will expand over time.”

That’s not the service’s only effort to interest students in an Army career in the Cyber Branch. “We’re now working with high school kids that are coming into ROTC. We’ve got 15 scholarships focused on diversity for cyberspace operations. We have 10 people we’ve selected so far,” the commandant reported.

He added that the service is talking to students as early as their freshman year and offering information about internships with the National Security Agency, Cyber Command and the Network Enterprise Technology Command, commonly known as NETCOM. “We are looking for the skills that you have in high school and looking for the right skills that you have demonstrated in college, and that’s what we’re bringing in to help solve the challenge we have in cyberspace.”

The Army’s cyber recruitment efforts in recent years seem to be paying off. Gen. Craft reported that the service received 1,200 applications for more than 100 officer positions. Additionally, 25 percent of students in advanced individual training courses already have bachelor’s degrees, most in STEM career fields. And 10 percent of students in the Basic Officer Leadership Course already are working on their master’s degrees.

But some students without STEM degrees perform well on the cyber assessment test, which he describes as an advanced STEM test that no one passes. “The ones that are very interesting to me are the ones that are Arabic majors, international relations majors and various humanities majors that actually did better on the computer science portion, on the coding portion, than any computer science major from any university,” Gen. Craft said. “Those are the ones that we’re very interested in trying to figure out what makes that person tick because of the mad skills that clearly they have demonstrated.”

The ones that are very interesting to me are the Arabic majors, int'l relations majors, and humanities majors that did better on the computer science, on the coding, than any computer science major from any university.--BG Paul Craft, commandant, Army Cyber School#CERTS

He indicated that the competition to get into the Army Cyber Branch is stiff enough that the branch can be picky. Just getting a 4.0 grade point average is not necessarily enough.

“We have a couple of NCAA champions. We have some Division 1 athletes who are also STEM degrees, who also maxed out the assessment test, who are also physical training studs and stud-ettes,” he said.

He cited one prospect who is the captain of the NCAA Army tennis team, who was a runner up for a Rhodes Scholarship and who already is working on her master’s degree. He also noted that Arik Smith, the captain of the West Point football team, was voted most valuable player of the Armed Forces Bowl, a lead tackler, a lead sacker and a three-year starter with a high grade point average. “That’s the good news. Bad news is he just got picked up by free agency and this week he’s actually at rookie camp with the Jacksonville Jaguars,” the general joked. “I kinda hope that he makes the team. He’ll owe us on the back side.”

The Army also is expanding its cyber expertise by offering direct officer commissions—lieutenant colonel and colonel—for the first time. The Cyber Branch he noted was only created seven years ago, so no one in the branch who ranks major or above started their careers in the cyber field.

“We have a program called the Direct Commission Program. That’s where academia, industry, civilians can come in and achieve a rank up to 06 [colonel] in our Army. I will tell you that we just commissioned our first 05 in the Cyber Branch. That is a high-end engineer,” he reported. “We’re bringing in people in the higher ranks because we can’t grow a branch that’s seven [years old], and you can’t create a lieutenant colonel or a colonel that has high-end RF [radio frequency] engineering, cloud engineering, cloud security, or other capabilities like that. We expect in the next 90 days to bring in our first colonel."

The officers being directly commissioned likely will have nontraditional career trajectories, he indicated. “These folks aren’t necessarily going to be those brigade commanders that you’re probably thinking of. These are folks that are deeply degreed in advanced cyberspace operations, advanced engineering skills that they’re bringing into our force to really help out on the mid- and top-end of what we do.”

Fellow panelist Ronald Pontius, deputy to the commander, U.S. Cyber Command, reported that Cyber Command is working with the University of South Carolina, among others, to potentially establish relationships. “We are very absolutely engaging with colleges and universities across the country. We have a tremendous relationship with South Dakota State, for example, because they have a very strong cybersecurity[program].”

Col. Dennis Howell, USAF, 480th Intelligence, Surveillance and Reconnaissance Group, also served on the panel and cited the need for the U.S. military to compete with China for leadership in such areas as artificial intelligence (AI). “We’ve seen the Chinese effort to become the leader in advanced technologies, specifically in robotics, AI and biotechnology. So, for us in the Air Force, it’s a need to cultivate that workforce with advanced skills and capabilities to be proficient in cloud technology, in AI, in data analytics and software and capability development, cyber intelligence analysis in both offensive and defensive cyber.”