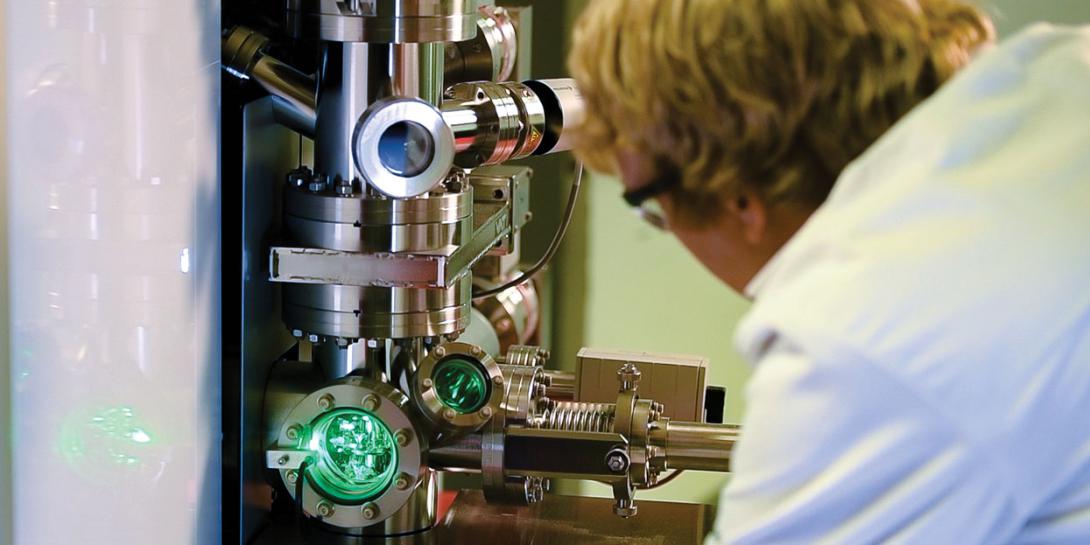 Nanotechnology continues its march through the field of electronics, enabling faster and more energy-efficient computer processors, larger computer memory density and increased battery capacity. These ever-shrinking micro and nanodevices require advanced manufacturing methods to produce. Atomic-scale processing refers to a collection of these methods that may be used to deposit and remove material at the smallest scales, a single atomic layer at a time.

Scientists at the U.S. Army Combat Capabilities Development Command’s Army Research Laboratory (CCDC ARL) are investigating the deposition of single atomic layers, which is accomplished through a technique known as atomic layer deposition (ALD). This approach provides the capability to produce highly conformal, functional coatings on substrates of any size or shape. As a result, ALD is a highly versatile technique that has been implemented to coat both large bulk fibers, such as Kevlar, and nanometer-scale subcomponents of computer processors.

ALD processes are characterized by the sequential introduction of chemical vapors, or precursors, that react only with exposed surfaces. Once the surface is saturated with a monolayer of precursor, the reaction terminates until a co-precursor is introduced. The films typically are atomically smooth and have tightly controlled thickness and chemical composition.

These films have been used to uniformly coat nanometer-scale features with up to a 5,000:1 depth-to-width aspect ratio. Additionally, viable ALD processes exist for many useful materials that now encompass most of the periodic table of elements. Unsurprisingly, ALD for three-dimensional microelectronics integration is currently unrivaled.

This raises the issue of—other than accelerating computing speed—how ALD technology is uniquely relevant to the Army. The ARL believes that ALD is a core technology for Army modernization. In addition, the service thinks these newly discovered and developed films at the atomic level have relevance in at least four of the Army’s six modernization priorities represented by the respective cross-functional teams (CFTs).

Recently, scientists at CCDC ARL have demonstrated layers or thin films at atomic scale manufactured by ALD with never-before-seen material properties. For example, they demonstrated the world’s first ALD piezoelectric cantilever, which is targeted for integration into microelectromechanical systems inertial measurement units (MEMS IMUs) and could benefit the assured positioning, navigation and timing (APNT) CFT. IMUs are essential to enabling navigation in GPS-contested environments.

The ARL scientists have demonstrated rare anti-ferroelectric properties for thin-film lead hafnate, which can have implications for electrical energy storage and the soldier lethality CFT. They also have demonstrated ferroelectric lead hafnate-titanate, which could be applied to computer memory that can be written quickly and remain stable without a power supply for more than 10 years. This so-called nonvolatile random access memory (NVRAM) could aid in distributed sensors and communications for the network CFT.

Finally, ALD potassium tantalum niobate, an optoelectronic material, currently is being developed at the ARL for laser protection. When this material is excited by electricity, the index of refraction changes to enable it to deflect harmful rays. This has potential for transition into the next-generation combat vehicle and future vertical lift CFTs.

The task of developing these materials was steep, but fortunately, the ARL scientists were not alone. One of their primary industry collaborators, G. Bruce Rayner Jr., has a background uniquely suited to aid in the advancement of U.S. Defense Department technology and has provided tremendous support to the ARL for nearly a decade.

Rayner is the principal scientist for atomic layer deposition at the Kurt J. Lesker Company (KJLC) Inc., an original equipment manufacturer (OEM) of ALD equipment based out of Jefferson Hills, Pennsylvania. Rayner, who served in the U.S. Marine Corps from 1986 to 1990 and subsequently earned a doctorate in physics from North Carolina State University, continues to support the U.S. armed forces through a cooperative research and development agreement (CRADA) between KJLC and the ARL.

Through the CRADA, Rayner provides ongoing support to help develop next-generation atomic-scale processes and equipment toward the advancement of Army modernization priorities. In 2012, he installed a first-generation research-grade ALD process system at the ARL. A second system was installed in 2015 to help in the development of complementary materials. Both tools have greatly enhanced the lab’s ability to innovate new processes, but there remains much untapped potential with this strategic partnership.

Addressing the biggest problems atomic-scale processing faces will require additional resourcing and a centralization of the Army’s effort to solve them. With strategic investment, the ARL could be recognized as a world-leading innovation engine for applied atomic-scale manufacturing technologies.

Nicholas A. Strnad, Ph.D., is a materials engineer, and Lt. Col. Elizabeth Agapios, USA, is the deputy director, advancing concepts at the Army Research Laboratory.