JADC2 can only be achieved with revolutionary technologies.
By Lt. Chris Britt, Lt. Andre Leon and Dr. Britta Hale 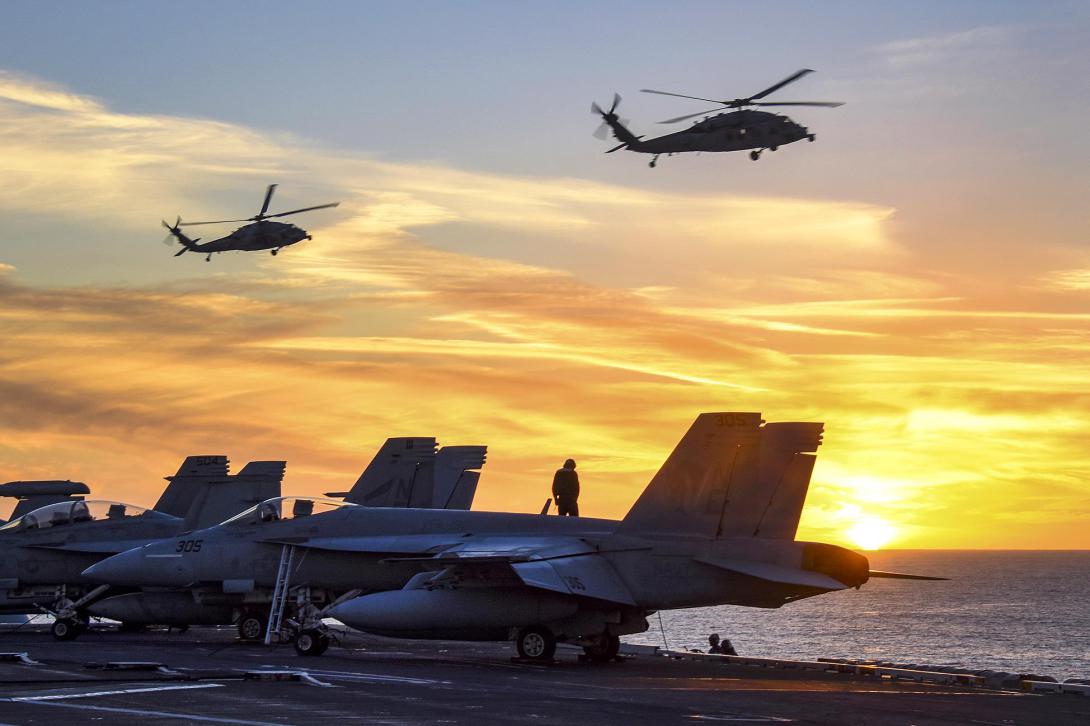 Two MH-60S Seahawk helicopters fly by the USS Carl Vinson in the Pacific Ocean in January 2017. The aircraft carrier deployed to the Western Pacific as part of the U.S. Pacific Fleet-led initiative to extend the command and control functions of the 3rd Fleet into the region. Navy photo by Petty Officer 2nd Class Sean M. Castellano

From seabed to space, the application of intelligent autonomous systems (IAS) is evolving within the joint all-domain command and control (JADC2) architecture.

As the integrated application of these heterogeneous devices matures, so will new threats to the cybersecurity of the interconnected future fleet of manned and unmanned platforms and sensors.

Solutions built for office spaces in the mold of classic, internet-style, point-to-point command and control (C2) link security protocols no longer fit the emerging paradigm. Joint simultaneous control across service components, robust operation in contested and degraded environments and efficient integration with international partners can only be achieved by recognizing the changing C2 space and seizing revolutionary technologies.

Within the JADC2 all-domain sensor network, autonomous systems are a shared service capability that extends the reach and capacity of the joint force, contributing directly to informed and faster decision-making by the joint force commander. As the Navy, under Project Overmatch, looks to integrate autonomous platforms into its fleet arsenal, it is imperative that stove-piped and proprietary business practices be removed and government-industry standard development take center stage, per Rear Adm. Douglas Small, USN, commander of Naval Information Warfare Systems Command. These needed commercial best practices derived from strong government-industry partnerships will allow for more secure and robust IAS standards to be adopted for today’s modernized fleet.

Technology transformation comes not only from the availability of new paradigms but also from customization to the unique environments and challenges faced by the Department of Defense (DoD). International Maritime Exercise 2022, for example, is an 18-day biennial naval training event led by U.S. Naval Forces Central Command with maritime partners from 60 nations and international organizations. International Maritime Exercise 2022 is not only the largest multinational naval exercise in the region, but also the largest unmanned maritime exercise in the world, with 10 partner nations bringing their own unique unmanned maritime capabilities to the event, which calls to attention existing DoD IAS communications barriers. Locally and across several Maritime Operations Centers, C2 of this diverse array of unmanned systems was conducted by various means. Effectively achieving centralized C2 in a distributed manner becomes increasingly challenging amongst the more than 80 unmanned system types showcased throughout the exercise.

To overcome such challenges, standardization has led the way in securing the employment of unmanned platforms since the first operational use of armed unmanned aerial vehicles during the 2001 invasion of Afghanistan. Fundamentally, the advantage of standardization lies in its highly refined specification and list of requirements. Whereas black-box proprietary protocols may receive little review, critique or analysis, standardized solutions are often linked to specifications negotiated and analyzed by world experts in the topic field. Therefore, it is not surprising that the DoD has long benefited from leveraging such expertise and analysis.

For more than two decades, communication over radio frequency has been the go-to operating procedure for unmanned system platforms, with minimal changes to the current application of connection-oriented standardized security protocols such as Transport Layer Security (TLS). However, the choice of which standardized solution to use is critical. Even while a standard provides notable benefits for interoperability, indifferent application comes with performance risks. Transport Layer Security was designed for well-connected and stable office environments, not contested and degraded ones. It requires several relays of information to re-instantiate if the connection is cut, leading to repeated delays if connections are unstable. Unsurprisingly, this risk is minimal in an office internet situation. When applied to a contested JADC2 operational environment, however, it can be fatal.

Even now, constrained operating environments continue to be witnessed in Eastern Europe, where coalitions of special operations task groups working in Ukraine and Poland regularly suffer from disrupted satellite communications. Satellite communication networks are intended to be accessible from anywhere in the world. Faced with contested access to these, the Ukrainian and Polish operation task groups looked for alternate communication methods such as mobile and ad hoc networks.

Unfortunately, ad hoc networks are heavily restrictive, limited to their immediate area and geographic features. When a network is set up in a valley, for example, it will not be able to communicate with another network on the other side of a mountain or high rock formation. Just as with line-of-sight radio, only local entities can utilize the network backbone and are disconnected from those farther afield. Critically, this leads to siloed communications separating special operations task groups and limiting command and control. Information infrastructure for mission success cannot be overstated.

Today, the U.S. Navy is taking advantage of and planning unique missions and opportunities across its portion of the DoD Information Network. However, its infrastructure and processes are based on technologies first conceptualized in the 1990s (e.g., Internet Protocol Security (IPSec)) and the aforementioned TLS). These network security protocols are point-to-point, requiring separate channel establishment with every existing network device for each new one added to the command overview.

Although cutting-edge at inception, there is still reliance on such point-to-point security connections today, decades later, forcing a high-latency and outmoded security overlay on top of dynamic autonomous device mesh networks. Contrast this with the swift evolvement of the mobile phone: the 1990s saw the use of personal digital assistants, while in the current day, wide-angle cameras and cloud connectivity are incorporated with the iPhone 13. Even DoD infrastructure has embraced cloud computing and microcomputers embedded in devices. Likewise, manual statistical inference was common in the 1990s, while today sees artificial intelligence and machine learning deployed throughout DoD systems. When such development is put in context, it is no surprise that office environment security protocols and architectures from the 1990s are nonperformant against new generation features and current capabilities.

Since standards paved the way for interoperability in the first place and innovation is shifting from defense to commercial sectors, this raises the question: what reinforcements for JADC2 challenges exist incognito among emerging industry capabilities?

Fortunately, new industry standards such as the Messaging Layer Security protocol address these current shortcomings. Asynchronicity-by-design is a cryptographic protocol design approach that is robust to connection failure and does not require multiple relays of non-mission-relevant data to re-instantiate the connection—a connection handshake. In fact, the security layer is survivable over connection loss and reconnect. In a time when DoD requirements call for C2 interoperability across the cyber domain to meet National Defense Strategy objectives and adversaries continue to develop sophisticated anti-access/area denial capabilities, these enhancements would significantly improve IAS security and that of information resiliency and speed to supported troops.

Not only do new standards provide for asynchronicity in C2 security protocols, but they also offer another attractive feature for JADC2: multidevice support. Point-to-point connections like IPSec and TLS incur an overhead linear in the number of devices on the network. As the interconnected domain scales for true oversight of the battlefield, the pain of such a slowdown is palpable. Conversely, the Messaging Layer Security standard is explicitly built for multidevice scenarios, supporting logarithmic group scaling—a significant improvement. Emerging industry protocol standards thus expand on their historical predecessors and offer customization capabilities for the currently evolving and future JADC2 environment.

Standardized asynchronous and secure multidevice C2 protocols must ultimately become the key enablers of dynamic teaming for allied interoperability, further enhancing use cases and notably the JADC2 concept. The inclusion of these key enablers will provide seamless IAS interoperability with other military services and allied partners, overcoming the challenges of data sharing and C2 at scale in this new reality agnostic to device or environment.

Even now, constrained operating environments continue to be witnessed in Eastern Europe, where coalitions of special operations task groups working in Ukraine and Poland regularly suffer from disrupted satellite communications.

The future of modern warfare will only increase its dependency on joint IAS technologies. This is not a battle of proprietary techniques but of joint, standardized solutions that can span international collaboration and solutions for denied operational environments that can support asynchronicity and multidevice scenarios with efficiency and security. Emergent techniques uniquely fit the needs of JADC2; however, embracing that potential is a choice. Black-box proprietary solutions or even random standardized alternatives that are inappropriately selected in light of tactical environments will continue to create problems simply due to ease or familiarity to implementors unless there is clear direction to look at new potential. The new IAS paradigm is fertile ground for applying such constructs, bringing it one step closer to achieving the desired strategic end state.

Considering the recent cyber actions taken by Russia against Ukraine, the peer rival threat is real and more tangible than ever before. There is an increasing need for speed and security in sensors and unmanned assets. As called for in the 2021 Navy Science and Technology Strategy for IAS, the DoD must keep pace with shifting threats and technology by fundamentally redesigning the journey from science and technology to adapting warfighting capability. In an era of intertwined, rapidly accelerated threats and new autonomous technologies, drastic moves to speed development and operationalize and adopt disruptive and secure industry technologies to meet these challenges should be a foremost priority. That choice affects not only security but operational resiliency.

Increasing resilience, connectivity and real-time awareness amidst a distributed and contested environment and among international allies such as at International Maritime Exercise 2022, are all key tenets associated with the DoD’s unmanned campaign plan. C2 capabilities are the enablers of these tenets. C2 link protocol design selection subtly but sharply determines the efficacy of IAS capabilities. This choice is the lynchpin in the ability of IAS to jointly achieve the seamless integration, synchronization and security required to become multidomain operations force multipliers.

Lt. Christopher Britt, USN, holds a Master of Science in Cyber Systems and Operations from the Naval Postgraduate School. He is a recipient of the Fleet Cyber Command Award for Academic Achievement in Cyber Operations. His work in a joint thesis with Lt. Andre Leon tackled the question of multidomain security interoperability, with testing on aerial and surface autonomous devices.

Lt. Andre Leon, USN, holds a Master of Science in Computer Science from the Naval Postgraduate School. He is a recipient of the Fleet Cyber Command Award for Academic Achievement in Cyber Operations.

Dr. Britta Hale is an assistant professor in Computer Science at the Naval Postgraduate School. She holds a Ph.D. from the Norwegian University of Science and Technology. Dr. Hale’s research focuses on cryptographic protocols, autonomous device security and security within constrained and denied environments. 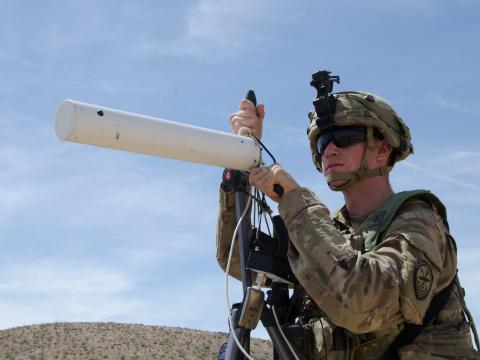 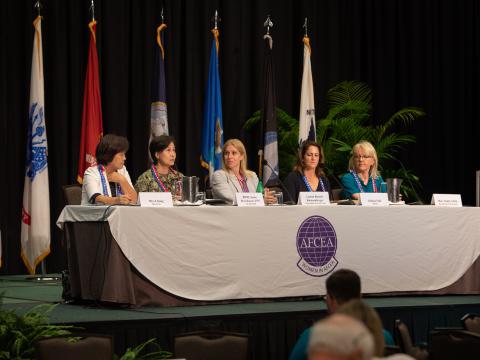