Officials ponder the future of joint cyber training.
By George I. Seffers 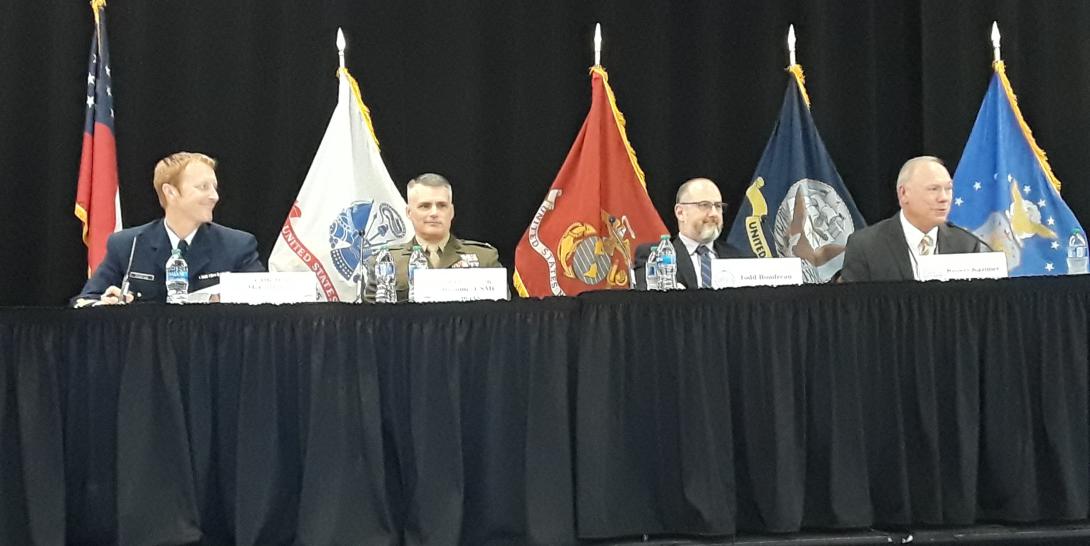 A panel of cyber experts discussing the pros and cons of dramatically expanding joint cyber training among the military services and other agencies agreed the pros outweigh the cons.

The panel discussion took place on the second day of the AFCEA Cyber Education, Research and Training Symposium (CERTS), May 10, in Augusta, Georgia.

Moderator Robert Kazimer, deputy to the commanding general, U.S. Army Cyber Center of Excellence and Fort Gordon, told the audience he intended to ask provocative questions but that on the subject of joint training the participants agreed.

The panel discussed a scenario in which the Army acts as the executive agent for cyber training, and the Army’s Cyber School at Fort Gordon, Georgia, would serve as the central hub for training for all of the military services and the U.S. Coast Guard, which falls under the Department of Homeland Security (DHS).

Todd Boudreau, deputy commandant, U.S. Army Cyber School, cited partnership between the Army and Marine Corps as a joint training model. “We have not only Marine students. We have Marine instructors in our schoolhouse, and we partner with them,” he said. “It is the different perspectives that we get.”

Boudreau pointed to the Special Operations Command, which trains various special operations forces, such as Delta Force, Army Rangers and Navy Seals, as another example. The cyber forces, however, have not achieved that level of joint training. “We’ve created teams, and each team is supposed to train to a standard. Now, their application will likely change based on the threat and the environment they’re being pointed to, but the presentation of a fully trained and qualified individual is expected to be at a joint standard,” he said. “We’re looking at readiness rates. Everyone is rowing hard, and we’re not catching up. We’re not making the distance that we have to.”

He suggested to the other services that setting up a cyber branch at Fort Gordon wouldn’t mean they had lost anything. “It actually means that you’ve taken some of our turf, and we’re working together.”

Boudreau also suggested the Army’s Persistent Cyber Training Environment (PCTE) could benefit the other services. “What is often discussed is that as an executive agency, you have a single head. I’ve watched enough foreign movies that show me anything with more than one head is a monster, so you’ve got to have somebody that is responsible—not in charge but responsible as we bring those partners together and form that coalition,” he offered. “PCTE allows us to do that in a timesaving and resource-saving environment.”

The solution would allow other services to train personnel remotely using PCTE. “We can leverage PCTE as training from the executive agent schoolhouse to other remote campuses. Think of the airman and the soldier out at San Antonio … being able to be in the classroom using the same PCTE instantiation as part of the class from afar.”

Col. Joseph Broome, commanding officer, Marine Corps Communication-Electronics School, noted that there would always be some friction over who would be in charge of joint efforts, but Marines already train with other services and is inherently joint. “I would say that the pooling of resources is an absolute force multiplier in an age of dwindling resources. Adding to the joint training would probably be a short bridge to cross for us.”

There already has been some discussion of the Marine Communication-Electronics School moving to Fort Gordon because its current facilities are decades old, and the service does not have the funding to replace them. Moving to Fort Gordon, however, would cost $.5 billion.

But recruiting talent also would be an upside for the Marine school to move to Georgia. “I’m in the middle of nowhere. That comes with a huge challenge—recruiting talent for instructors,” he said, noting that some people don’t want to move to the desert at Twenty-Nine Palms, California, because their families resist the idea. “It would be much easier if we were in a location like Fort Gordon, for example.”

Cdr. H. Lars McCarter, USCG, chief of Cyberspace Policy and Capabilities, U.S. Coast Guard Office of Cyber Forces, explained that a joint effort could include other agencies and departments, such as the DHS. “More than just the jointness, the interagency-ness is what we have to deal with DHS. Beyond just the Defense Department jointness, looking out across what potentially jointness could bring to the interagency could be a force multiplier in itself.”

Like the Marine Corps, the Coast Guard already partners with other services and agencies. “Specifically from the Coast Guard’s perspective, we can’t do this on our own. To follow what you’ve already developed and bring our money to it just makes sense and then our people will figure it out. We’ll tailor it to whatever we might need. But I think everybody should be into the idea of doing it jointly,” McCarter said.

Boudreau also talked about the pace of technological advances and the resulting changes to training. “When I think of change in this environment, I really think of the three Vs: velocity, volume and violence.”

Quantum computing and artificial intelligence are two examples of velocity. "Velocity of change is about to go exponential,” he warned.

Fifth-generation mobile technology exemplifies the volume of change, he indicated. “We’ve seen the Internet of Threats—or, I’m sorry, the Internet of Things, the ubiquitous nature. There’s just more and more that is connected,” Boudreau said.

The panelists also debated teaching theory versus training students in practical tasks. Col. Broome said the Marine Corps school offers both, depending on the subject. For networks, for example, the school with teach a lot of theory while also offering hand-on training with specific technologies. For some electronic maintenance courses, however, theory is more important so that students are prepared to scrounge for repair parts when necessary or to fix a robotic system they’ve never seen before.

The colonel also reported that he is interested in adding advanced augmented reality and virtual reality training at his schoolhouse and could use a cyber training range.