The Army software factory begins with security.
By George I. Seffers 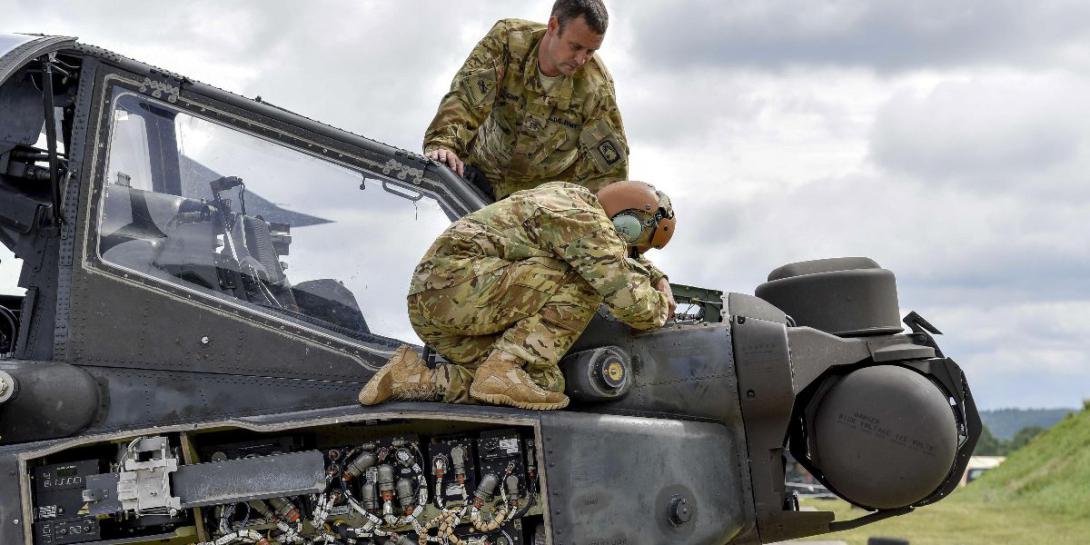 In the two years since the Army Software Factory launched, it has sent multiple applications into production. And those apps are being developed in large part by soldiers in nontechnical career paths, including combat engineers, medics and maintenance.

Army Futures Command launched the software factory in July 2020 to test the possibility of soldiers and Army civilian employees adopting commercial practices and building software solutions for the service. If the concept proves successful, it could demonstrate a more versatile model for building and fielding Army software while also preparing soldiers to operate on a highly technical and disconnected future battlefield.

The factory’s ultimate objective is to “up-skill” the service’s workforce while experimenting with a tech-oriented future force design. In the short term, it builds digital competencies across the Army at all echelons, offers soldier-built solutions and harnesses the nation’s innovative spirit through close collaboration with the tech sector, according to the software factory’s first annual report published last year.

The overall mission is to build a future force design in which conventional Army units can partner with agile, uniformed software teams to build software on operational networks as rapidly as possible, explains Lt. Col. Vito Errico, USA, the software factory director.

Despite still being in its relative infancy, the software factory already has sent eight applications into production from about 12 projects so far. The first is known as CASL Pick Sorter, and it was developed in partnership with Army Materiel Command. The app streamlines the Army’s order fulfillment and distribution process for parts and supplies, saving time and money.

Before the app, soldiers would log into the Global Combat Support System–Army, print large stacks of paper lists and find parts without the ability to sort or organize. On average, the Supply Support Activities fulfilled about 1,500 parts, equaling 20 man-hours per day. Soldiers sometimes waited an hour just to print the list, according to an Army article.

In 99 days, the team developed CASL Pick Sorter, which allows soldiers to drop a PDF into the system and prioritize the results lists by part location, specific parts or unit. Across the Army, CASL Pick Sorter saved more than 3,000 man-hours a day, led to a 173 percent increase in picks of parts per minute and provided 65 percent cost savings through optimized cloud development, Army statistics show.

The software factory leaders learned three things from that first app: that the Army absolutely can build software quickly, involving soldiers in the process is invaluable, and when soldiers want to use software, they help drive adoption, Col. Errico reports. “We built a product for Fort Hood that Fort Carson then started to want to use, and Fort Drum wanted to start to use, and then it just started to take off. Now, we save the Army about 3,500 soldier hours per day across all Army SSAs [Supply Support Activities] or across all Army logistical warehouses.”

Another app, Carrera, allows National Guard and Reserve soldiers to search for job positions from any device or any location. Previously, that information was available through the Tour of Duty app and could only be accessed using government-furnished devices and through the Army Non-classified Internet Protocol Router Network, notes Maj. Jason Zuniga, chief of operations at the Army Software Factory. “So, service men and women for the Guard or Reserve had to potentially drive to a local armory or a nearby installation to even just look at the job postings.”

In a sense, software factory personnel were ahead of their time with Carrera. They were already working on the app when the National Defense Authorization Act (NDAA) gave the Army one year to provide National Guard and Reserve forces a commercially accessible capability. “Lo and behold, we at the software factory had already selected that as a major pain point and a problem for us to take on. We had already been working on it for a few months, so once the NDAA requirement came out, we were able to have a solution in the hands of soldiers in less than 45 days,” Maj. Zuniga states.

Col. Errico says the software factory is now gathering information on the results of Carrera. “It’s something they can all access essentially from the comfort of their own home now, so we’re working to track the data and improvements provided for the job postings Army-wide.”

The colonel also highlights an app called My Squad developed specifically for the consummate soldier, Sgt. Maj. of the Army Michael Grinston. “The idea is how to better connect the ranks of E6 [staff sergeant] and below to the jobs that they need to do in everyday squad leader life to make squads feel better connected,” Col. Errico states, adding that the app should begin testing soon.

The app is designed to foster squad leader communication and counseling with those they lead. It could allow leaders to get to know squad members on a deeper level by building trust and learning their backgrounds. It also emphasizes taking ownership and responsibility while focusing on leadership.

Sgt. Maj. of the Army Grinston says in an Army article that the app provides a platform for virtual counseling with squad members. “We’re really looking at how do we give a squad leader an app—like a leader’s book—right there in the palm of their hands.”

Another project streamlines the preventive maintenance checks and services (PMCS) process that soldiers go through on a regular basis to ensure equipment, such as vehicles, are combat ready. It also is being developed with Army Materiel Command.

Maj. Zuniga says an Army warrant officer in a maintenance MOS first came up with the idea and was recruited to help the software factory personnel develop the technology. “He was trying to implement that for his units, but because we don’t have a lot of the authorities to develop and put things on an operational network, that was a challenge for him to be able to do that and create it at scale. He was selected to be a part of our first cohort here, arriving January of last year. So, one of the teams is taking a lot of the work he had started in a nontraditional technical role, and he’s a key developer on that PMCS team.”

The Army Software Factory’s business model calls for the inclusion and training of soldiers from any military occupational specialty, or MOS. Currently, the factory employs soldiers from approximately 50 different career fields. Once selected, the soldiers are quickly trained in four technical areas: design, product management, application engineering and platform engineering. They typically serve at the factory for three years and have additional skill identifiers added to their Army records.

“It’s basically open to a slew of individuals across the Army to apply to the program, and we have a relatively diverse cohort that has infantry, armor, field artillery and other unique spaces like medical, air defense, military intelligence—just across the gamut,” the major says.

For example, Lt. Raquel David, USA, managed the Carerra team and now leads a team exploring technical solutions to better serve sexual assault victims. “She is a combat engineer. She would have never touched this sort of stuff in her normal MOS,” Col. Errico asserts. “She is a wonderful product manager or agile software lead. As much as this is about software, it’s about managing stakeholders and making change in an Army that doesn’t normally operate this way.”

In another example, Spec. Jeremy Boyle, a combat medic and self-taught coder with a “lifelong passion” for coding, now serves as the anchor engineer on the factory’s platform team. He exhibits “a world-class competence for delivering and contributing to the open-source Kubernetes project and upskilling not only his coworkers but … people that outrank him,” Col. Errico says. “He’s a wonderful story of the mismatched talent that’s out there.”

Soldiers with the software development skill identifiers in their records are likely to be in high demand, the colonel says. “You’re already seeing many organizations and Army leadership beginning to prioritize soldiers with that digital fluency. They want soldiers with digital fluencies in their formations. It will be increasingly sought after across the enterprise.”

Although security has traditionally been an afterthought during software development, that is not the case at the software factory. Development security operations, or DevSecOps, is one of the commercial best practices being adopted at the factory, according to Col. Errico. DevSecOps considers software security from the very beginning rather than adding it later in the development process, or worse, once the software has been fielded.

“Part of what we set out to demonstrate is that to build software in a modern way means that you have got to incorporate security into the development process absolutely as early as possible and basically to practice a true DevSecOps model,” Col. Errico says. “Everything that we do here—our development, test and staging and production environments—are all cloud-based, and that helps enable us to realize and actually practice DevSecOps the way it was intended.”

Col. Errico declines to describe the testing process the factory-developed software goes through—whether it undergoes penetration testing, for example—but he indicates it is in line with modern security practices. “We have a variety of different injects and risk mitigation protocols to make sure that both automated and human security checks are in the loop from the very start of the development process,” he says.