Data Is the New Driver of the Fleet

The U.S. Navy resolves to maneuver successfully at sea and in the electromagnetic spectrum.
By Robert K. Ackerman 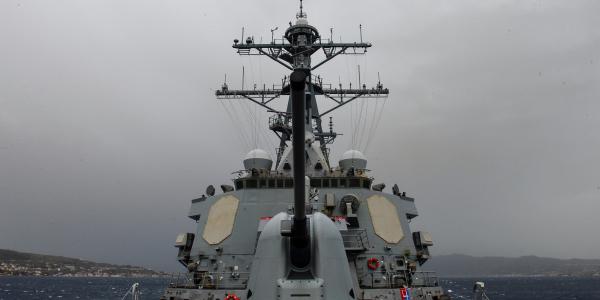 The USS Porter transits the Strait of Messina in the Mediterranean. The Navy is increasing its emphasis on information warfare (IW) as it integrates the capability with air, surface and subsurface operations.

The ability of the U.S. Navy to maneuver during combat will soon be as important in the airwaves as it is in the air and the waves. The sea service has designated information warfare a domain as critical as its more commonly known physical counterparts, and the capacity to exploit and operate within it may hold the key to prevailing in future maritime conflicts.

In addressing concerns about electronic warfare (EW), the Navy focuses on electromagnetic maneuver warfare, or EMW. “What we have done as a Navy is taken electronic warfare and expanded it beyond the traditional thoughts of EW to also account for maneuver across the spectrum,” states Vice Adm. Jan Tighe, USN, deputy chief of naval operations for information warfare (IW) and director of naval intelligence (N2N6).

The Navy’s Fleet Forces Command has developed a detailed EMW campaign plan in which the electromagnetic spectrum is a major warfighting domain, along with its air, surface and subsurface counterparts. This plan encompasses all Navy IW pillars—assured command and control, battlespace awareness and integrated fires—and it emphasizes the importance of maneuver and its decision space. Adm. Tighe notes that the Navy has increased programming and budgeting for fleet EW, and it is looking toward both government and industry for effective EMW solutions.

But these efforts do not stop with U.S. forces. The Navy is working to build strong EMW relationships with allies and partners to take advantage of the unique capabilities each can bring to the fight. The admiral says these partners are concerned about dealing with the denied environments that could characterize future battlespaces, and they do not want the United States to address these challenges in ways that benefit only U.S. forces. They hope that any U.S. solution would be scalable to other forces in a coalition.

The Navy pursues this approach through multinational exercises that strive to incorporate partner strategies into U.S. EMW operations. Unlike intelligence cooperation, in which information can be shared a la carte, EMW cooperation at sea must feature an ally or a partner that can comply with U.S. intent in that domain. Even rudimentary EMW exercises among U.S. and partner nations can help prepare for conflict in a fully electronic battlespace, Adm. Tighe notes.

The Navy’s success in IW requires leveraging big data, human-machine teaming and machine learning, the admiral points out. The most difficult aspects of capitalizing on these and other technological innovations emerging from industry include the cultural impact on the service—specifically, transforming the Navy’s way of thinking, she posits. At the top of this list is consideration of data as a strategic asset.

“The importance of recording information correctly, capturing it, being able to link it together [with other parts] and understanding the performance of that part are critical for us to be able to manage our supply system or perform predictive maintenance on a particular piece of equipment,” Adm. Tighe offers as an example.

All the information in this data chain must be captured and exploited accurately, and the Navy has to change within so it can accommodate change from the outside. “Data as a strategic asset is probably at the root of what we must do,” the admiral says, adding, “and then how we rationalize that data and ensure that it is clean … will allow us to learn things that we wouldn’t have been able to see by looking individually.”

The second part of this data challenge is to move the data into an environment—for example, the cloud—that allows the Navy to take advantage of machine learning, such as big data analytics. Adm. Tighe warns, however, that many of today’s Navy’s applications are not cloud-ready. Consequently, the service must move its applications into a more forward-leaning cloud infrastructure. This application issue directly affects how the Navy will command and control that cloud-based data, along with its associated cybersecurity.

“We have to be exceptionally thoughtful in how we’re managing our data going into the cloud, in our other service providers that may be writing applications in the cloud and how we get our operational fleet [and] U.S. Cyber Command involved in monitoring it and responding to any issues that may come up,” the admiral declares.

“Our ability in both data computation and data storage opens up a world of opportunity for us that we didn’t have before,” she continues. “Each piece of data we collect can have greater strategic implications than what we might have initially intended.”

New technologies are enabling the service to realize the art of the possible. Technology is largely the terrain in which Navy IW operates, Adm. Tighe points out, so any information technology changes will have an effect on IW. The Navy recognizes that it must adjust and adapt to these changes to keep its IW as a warfighting asset over adversaries. “Our path will likely follow the technological trends that change, although I would like to precede them,” she says.

She adds that IW will increase its contributions to maritime lethality as every aspect of the naval force integrates greater IW capabilities. While technology is the key enabler, a mindset change will generate stronger combat power. Doctrine development will lead to greater success through IW and provide a base for tactical innovation via evolving technology. “Very few things will remain static in IW over the next five years,” the admiral predicts. “Improvements, refinements and new capability integration will open new doors currently unimagined.”

Industry will play an important role in that technology evolution. Among the technology requirements Adm. Tighe cites are automated systems to provide mission cognizance and effect through a continuously updated dashboard. This capability would function at the tactical and operational levels of war. Also, the Navy is turning to industry to provide cybersecurity solutions for systems of systems, particularly industrial control systems, as well as marine technology and avionics systems. The goal is to give operators a resilient network secured through self-detecting, self-protecting and self-healing actions.

Adm. Tighe describes mitigating cyberthreats to information technology and operational technology as her top threat challenges. In the information technology environment, technological advances have both empowered adversaries and increased vulnerabilities within the Navy. Over time, cyber intrusions have evolved from largely espionage activities to virtually any way that an enemy might seek to impose its will, she continues.

On the operational technology side, the Navy’s connection of almost every physical component to a network of some type mimics the risk of the civilian Internet of Things (IoT). Having the ability to remotely control or monitor each device presents a world of opportunities for the Navy, but it does the same for adversaries—just as IoT users are discovering. “It opens the opportunity for mischief in new ways as our technology progresses,” Adm. Tighe points out.

The service’s IW community has been conducting operations against asymmetric threats such as counterterrorism and weapons of mass destruction. But lately, it has shifted the bulk of its investment into capabilities related to peer competition and high-end warfare, Adm. Tighe states. “Our understanding of peer competitors’ capabilities demands a high level of fidelity from the intelligence community in order to protect or defend naval systems from cyberthreats, advanced conventional weapons and complex electronic environments,” she adds. This approach reflects her position as the N2N6.

When it comes to collecting intelligence data, the admiral takes a “platform-agnostic view” of collection. Unmanned systems are playing a more significant role, especially in areas that may be too dangerous for crewed platforms. But the more important technological advance in this area involves automation of sensor control and the fusion of data collected by both manned and unmanned systems. Being able to do computing at the edge, on the platform, would allow the Navy to act on collected data efficiently.

Whether this computing arrives at a targeting solution or provides synthesis and analysis of waveforms, the Navy does not want to try to move mountains of raw data across its networks—they just do not have the bandwidth, the admiral notes. However, the Navy does want to save all collected data for later processing and use.