DISA Plans No Pressure on Thunderdome

If users love it, they will come.
By George I. Seffers

Defense Information Systems Agency (DISA) officials do not plan to try to force others in the Defense Department or military services to use its zero-trust solution known as Thunderdome.

SASE, which is pronounced “sassy,” is a technology package that includes SD-WAN, firewall as a service and cloud access security broker. While SASE has been implemented across much of the commercial world, it has not yet been widely adopted by the government.

DISA officials express great excitement about Thunderdome, and the services—especially the Navy—already are cooperating pretty closely with DISA during the acquisition process, but Stephen Wallace, systems innovation scientist, Emerging Technology Directorate, DISA, said the agency will not pressure others to adopt Thunderdome.

Wallace made the comments during the AFCEA TechNet Augusta conference in Augusta, Georgia. Along with Wallace, Angela Landress, DISA’s Thunderdome program manager and chief for Perimeter Security Division, and Maj. Gen. Garrett Yee, USA, DISA’s assistant to the director, participated in a Thunderdome panel at the conference.

The agency does not intend to pressure anyone, however. “But the other side of the coin is that we’re not going to try to force the entire department onto the solution. We want to make it good enough that if you see value in it, you come. And if you don’t and you want to go your own route, that’s fine too. The concern we do have with going their own route—there’s one of the services that’s already down this road quite a way—is interoperability.”

DISA officials said Thunderdome includes a total of seven capabilities aligned with the Defense Department’s seven pillars of zero trust, which include the user, the device, the network, the applications, the analytics and the automation and orchestration.

Stephen Wallace, systems innovation scientist, Emerging Technology Directorate, @USDISA, says Thunderdome looks at the entire user experience from the access point to the point where they access the data.#AFCEATechNet

Angela Landress, Thunderdome program manager, @USDISA: Being a data-centric environment is so important to fight the fight. #AFCEATechNet

The program’s name was inspired in part because DISA operates in a contested battlespace. Also, from an architectural perspective, domes are lighter and quicker to construct than traditional buildings and also are one of the strongest designs because they support the weight of the roof evenly so that no single point supports the entire load or gives way under stress. Officials say this adequately describes DISA’s implementation of zero trust through Thunderdome, which contains many zero trust concepts that work together to create one strong, efficient and architecturally sound approach to a cloud-based implementation. 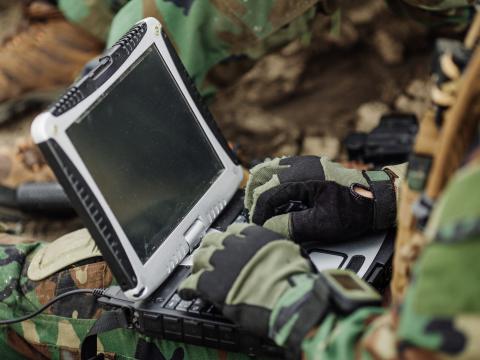