The DIA drives for enterprise solutions from new technologies.
By Robert K. Ackerman 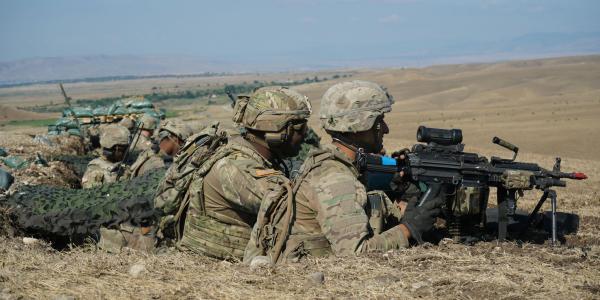 U.S. soldiers stand by for firing orders during exercise Agile Spirit 19 near Tbilisi, Georgia. A global threat picture vastly different from the one during the war on terrorism has compelled the Defense Intelligence Agency to revamp its technology base to serve greater levels of decision makers and warfighters. U.S. Army photo

The new threat picture has signaled the time for defense intelligence to come together in an unprecedented common operating picture. This effort, which may include a moon shot equivalent known as MARS, will require many technology-driven improvements, according to the head of the Defense Intelligence Agency.

With the broader availability of new technology and the need to conduct globally integrated operations at scale and speed, U.S. forces must move away from stovepipe systems and operate more as an enterprise, posits Lt. Gen. Robert P. Ashley Jr., USA, Defense Intelligence Agency (DIA) director. “For us to be able to operate really as an enterprise, to be able to move information from the intelligence community level down to warfighters … and to be able to ingest that at the services, we must be much more interoperable than we’ve been in the past.”

He adds that discussions are underway to make that move. These tend to focus on ensuring that the foundational layer is interoperable with the services’ view on foundational intelligence. The new global reality is forcing the intelligence community to think beyond the boundaries of combatant commands and services—particularly for acquisition at a joint level, he says. “You have to build and make sure the systems are interoperable.”

The U.S. national security focus has shifted from counterterrorism to great power competition, as China and Russia are challenging the United States around the globe. However, the terrorism threat has not gone away, so the United States must confront three distinctly different adversaries. Add Iran and North Korea, and the threat picture is even more multifaceted.

Assembling foundational intelligence on global foes requires understanding their capabilities, doctrines, the build of their militaries and their operational environments, especially where conflict could occur. That activity never ceased during the war on terrorism, but the DIA has increased its efforts with a greater focus on China and Russia, the general says. “The information that we get, and the analysis that we provide, in many ways is operational/strategic but also available and relevant down to the tactical level,” he states.

This means a second lieutenant would be able to reach all the way up into the intelligence community and view everything available. This information has relevance to a future fight because it provides greater context to what is taking place operationally, the general points out. “That enterprise approach allows you to see and push a lot more,” he says.

The goal of enterprise interoperability suits this new reality. “The context of great power competition is very different than unique, exquisite capabilities in a counterterrorism fight where you could get by without being interoperable,” Gen. Ashley maintains. “On a global integrated fight, you must be able to have that enterprise solution, and we’re doing that now.”

The DIA is working across the services and the combatant commands to better integrate targeting and collection management, the general states. This effort also includes ensuring the interoperability of foundational intelligence among all echelons, the services, and strategic, operational and tactical formations, he emphasizes. Multidomain operations are becoming the core of U.S. military doctrine, and the intelligence community is a part of that shift. Gen. Ashley notes that the DIA is responsible for writing the intelligence doctrine at the joint level.

U.S. forces have seen adversaries eat away at what once was a formidable U.S. technological advantage, and the intelligence community faces a challenge incorporating innovation into its capabilities. Gen. Ashley describes this as “updating the baseline of our foundational intelligence.” He notes that the Modern Integrated Database (MIDB), which was designed more than 20 years ago, is no longer true to its name. It has become a series of hundreds of different databases, including stovepipes, that no longer scale to the current information environment.

It will be able to apply advanced analytics, which will be essential as artificial intelligence (AI) evolves. Describing AI as “more aspirational,” Gen. Ashley notes that capabilities in machine learning, computer vision and training of algorithms allow DIA experts to work at a faster pace at scale. The agency never would be able to hire all the analysts it needs to digest imagery, sort through information and perform targeted analysis without them.

The agency has applied computer vision algorithms to help sort through millions of images, he continues. The DIA also is able to search for “things happening in the operational space with regards to what other nations can be doing, [so] that we can see sooner, faster and at greater scale,” he explains. This capability is based on the ability to apply algorithms and computer vision and to leverage information to an unprecedented degree.

The key to this lies in establishing the right data standards, he offers. This aggregation allows experts to obtain insights faster than available just through humans crunching massive amounts of data. The information environment also is a cloud-based structure that eliminates the need for querying separate databases. The general explains that this structure is application-aware, so even if information resides in many different clouds, a user need only send a single query. That query touches the multiple clouds, aggregates the information and returns it to the user.

“It’s those kinds of innovations that we’re looking at that allow us to be able to have better situational awareness, have richer information, to be more current, to be agile and dynamic—that is not static databases and that we are constantly updating,” Gen. Ashley states. It will help the DIA understand how the agency performs collection management, targeting and supply chain risk management, as well as having a clearer grasp of the infrastructure and what is happening in the environment, he adds.

As vital as this step is to the DIA, it also touches upon its biggest burden. “The biggest challenge is getting our arms around all that technology,” the general offers. This entails aligning personnel and breaking down stovepipes that have been built up over decades, he notes, adding that commonality among acquisition programs and data standards is necessary for the essential system interoperability. The agency must be able to move and ingest data and visualize a common picture.

“Really what we’re trying to build is the commercial Internet that everybody uses every day, but that has to be able to feed that foundational intelligence picture and provide that operational environment at speed and at scale,” he declares.

With a new global threat picture, the DIA is increasing its intelligence cooperation with other nations. “It is a natural evolution that we have to expand beyond those traditional Five Eyes relationships,” Gen. Ashley offers. “In some cases, those [relationships] will be multilateral, in some cases they’ll be bilateral. But really, I think we’re pushing on an open door when it comes to greater sharing with our partners, and it is a clearer understanding that we cannot take on the challenges of the current environment at the United States only.”

The key to foreign intelligence sharing is to organize yourself around the problem you have to solve, the general continues. “Defining what that problem is defines who’s under the tent and who you need to have a sharing relationship with,” he attests. The intelligence community is emphasizing to a greater degree the risk associated with specific partners, which is an emphasis he describes as integral to success.

In addition to greater interoperability among the U.S. military services, the DIA is examining the issue of intelligence interoperability with other nations. Gen. Ashley points out that a coalition doesn’t want to build its network on the fly, so it must establish a mechanism—networks and architecture—for operations. “As you’re thinking about the fights you have, you [must] think about ‘What’s the network I have to build, who has to be on that network, and what are the authorities that I need to be able to do that?’” Also, with information sharing, there are eight different categories of information tied into national disclosure policy, and these must be factored into a warfight, he notes.

In the past, designing the network used to be the sole responsibility of the command -6s, he observes. Now, a commander must be able to understand network architecture to ensure that the right parties receive necessary intelligence, and that direction must be imparted to the commander’s -6.