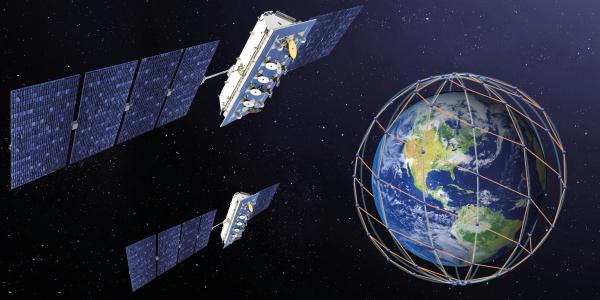 While some of these companies are nascent, like 2015 startups LeoSat or BridgeSat, others have been working to advance optical communications for a while. The experts all agree, however, that the time for laser communications has come.

“Instead of looking at RF [radio frequency] as the sole means of communicating, one should look at another means and that’s optical, using photons to accomplish communications,” BridgeSat’s Matsumori states. “Optical communications would be in addition to what’s already existing in our RF assets, because RF is not going away.”

The reasons to look beyond RF are for the benefits of better security, higher bandwidth, more speed and more capacity, he says. “If we don’t have something to augment what is being done in the RF domain, all facets of wireless communications will suffer,” Matsumori warns. “And this is certainly true for the defense world.”

For BridgeSat, pursuit of laser communications involves taking a wide approach to the burgeoning market, he explains. They are aiming for both low-earth orbit (LEO) and geostationary-earth orbit (GEO) applications, across various segments—space, air and ground.

The company has spent the last couple of years building up—through ownership or partnership—a global network of optical ground terminals with stations in Alaska, Hawaii, the Southwest United States, South America, South Africa, Western Australia, Qatar and Sweden. Officials at its network operations center in Denver control all of the ground stations.

BridgeSat provides spacecraft operators access to an optical communications network on a price-per-delivered-bit basis. According to the company, an operator only pays once the data is securely delivered from their satellite to their data center, and they can use the BridgeSat network, regardless of which space optical terminal is transmitting the data. “We offer operators a full turnkey solution that seamlessly connects satellites and high-altitude unmanned vehicles to the ground,” Matsumori says.

For the average warfighter, this may bring a more secure, faster means of communication. And it is a means to support the transmission of big data, he notes. “The interest by the U.S. government in the ability to have secure communications and a low probability of intercept, low probability of detection is very much in the minds of at least certainly the DOD [Department of Defense],” Matsumori states. “And if one has entered a theater that is RF denied, [where] the enemy has put in a full spectrum RF generator that basically blocks RF signals, the only thing that’s available that really does offer benefits is optical communications.

This level of security is a part of laser communications, Ball’s Troeltzsch says. With the wide aperture of RF antennas, “the communications beam is going to spread,” he explains. “You’re going to hit the other satellite without too much trouble, but you will also illuminate a broad area around it. With optical crosslinks you have to be able to point very accurately but the communications beam provides a very tight spot. This actually gives you an inherent security feature, which I believe is one of the best things going for optical communications.”

Troeltzsch confirms that a variety of military applications—airborne, maritime or ground—can benefit from this level of security, especially given the growing data needs across the services. “You might envision that you collected data in some part of the world, and you want to bring it back to the U.S. very quickly and securely,” he notes. “With optical communications you can move large amounts of data at high speeds in a secure fashion across the globe. It could be military communications, intelligence, optical or radar data. Almost any time you can imagine the military needing to move data in a resilient fashion, this optical communication system is a very attractive technology.”

The company has been involved in optical communications for more than 35 years and first applied technologies developed from its research and development to a project in the late 1980s called the Relay Mirror Experiment. “It was a really, really interesting experiment, and it involved Ball figuring out how to point lasers very accurately and send them through the atmosphere,” Troeltzsch shares.

Fast forward to about five years ago, when “tremendous interest” in optical communications resurfaced, and Ball returned to partner with Canadian-based Honeywell to create a well-designed, affordable LEO-based optical communication system, he explains. And while Ball has the experience needed for the electronics, the pointing controls and the optics, it does not have the capacity to build thousands of units. “That’s where our relationship with Honeywell comes in,” he says.

Ball and Honeywell have developed an operational LEO crosslink terminal prototype, for which the companies aim to reach technology readiness level six by the end of this year. “We have taken the technology that we have, the technology that Honeywell has, done a refresh, and we are positioning it to be ready to deploy into space in late 2020,” Troeltzsch states. “Then, a little further out, we’re looking at putting in place the manufacturing to be able to build and deliver a thousand units in the early 2020s for LEO constellations.”

To get ready for space deployment, Ball and Honeywell are working on building and qualifying the hardware that enables the optical communication links which, in effect, includes a sophisticated modem, lasers, a telescope and an exquisite pointing system. “When you stop for a second and think about two satellites, 6,000 kilometers apart, and you’re pointing these four-inch diameter telescopes at one another and having to hold them steady while you send data at 10 gigabits per second, it’s a very challenging pointing control effort,” he says.

Troeltzsch emphasizes that to apply LEO constellations with optical communications to U.S. government or military uses, they have to be commercially affordable. “You can build these terminals, but if you’re building 20 satellites or 50 satellites and these terminals cost a few million dollars apiece, it’s quickly unaffordable,” he says. “It’s just too much money. So one of the areas Ball has been focusing on is how to leverage the work we’re doing on the commercial industrialization part of this and put it into these specialized military needs for resilient space assets.”

And while Europe is already employing optical communications through their SpaceDataHighway (see sidebar), and Japan has seen success, America can also succeed in this arena, Troeltzsch suggests. Ball and others are focusing on North American solutions. “We have the capabilities in North America, between the U.S. and Canada, to have very sophisticated, reasonably priced optical communications equipment available for United States use,” he declares.

In addition, Troeltzsch ventures that GEO-related optical communications are still a viable option in about five to 10 years. It is a unique market segment for Ball to pursue, he notes, “using optical feeder links designed to ultimately send a terabit per second of data from Earth through the atmosphere up to GEO. All of the technology exists to do it today, but it’s about getting to the right price point. That is the challenge.”

Meanwhile, LeoSat, which also formed in 2015, is working to offer its LeoSat Network, designed to transfer big data to enterprise markets at speeds greater than 1 gigabit per second. The company would serve as the operator. “What we’re building is a terrestrial fiber network in space,” Abad-Santos says. “Our satellites, don’t think about them as satellites. Think about them as Layer 2.5 protocol MPLS [multiprotocol label switching] routers that we just happen to launch at 1,400 kilometers. And that’s the network that we’re building.”

For application of the optics-based satellite communications system, the company is going after the oil and gas, finance and maritime industries, telecommunications backhaul providers—and in the future, they hope to offer warfighters a resilient solution, the U.S. military. The LeoSat Network capability will provide low latency, high security, speed and full global coverage for data transfer, Abad-Santos cites.

“We are designing our network to be a fully integrated part of high-end enterprises,” he suggests. “We’re focused on enterprise users who require a point-to-point connectivity for their private network. So we’re actually not really competing against traditional satellite companies. We find ourselves more having conversations about how this relates to British Telecom or to the Orange Network work in Africa. So we compete more with terrestrial telecom providers.”

Last November, LeoSat received Federal Communications Commission (FCC) approval to launch up to 108 LEO satellites at 1,400 kilometers into circular polar orbit operating in the Ka-frequency spectrum. Next year, the company will be launching its bring-into-use mission—which is required by the terms of the FCC approval—then plans “to begin full tempo launching of commercial production satellites in the 2023 time frame,” Abad-Santos says.

LeoSat has two strategic investors: SKY Perfect JSAT Corp. (SJC), based in Japan, and Hispasat, a satellite communications operator based in Madrid, Spain, with offerings in Europe and Latin America. In addition, LeoSat partnered with Thales Alenia Space, a French satellite manufacturer, to conduct a Phase A engineering study. Based on the study and input from the strategic investors, LeoSat is making advancements to its planned satellite technology and system, Abad-Santos explains. “We’ve seen some opportunities for improvement, not only in decreasing the cost of the satellite constellation, but also increasing the throughput on the satellites themselves,” he states. “So all very positive things.”

In the meantime, Abad-Santos and his colleagues are working to build onto the roughly $2 billion in agreements with commercial service providers and resellers. “We’ve had an extremely positive commercial acceptance of the LeoSat architecture,” he notes.

And while the U.S. government or military has not yet agreed to be a subscriber, there is great interest, Abad-Santos says. Given the way they purchase satellite communications, the government does not prepay for capacity before it’s built. The finance industry, however, was an early signer. That industry operates in high frequency trading markets and was attracted by the low latency offered by the LeoSat system—“which is all enabled by our optical communications infrastructure on the space platform,” he adds. “Those benefits of low latency, high security, speed, global coverage—all of that is enabled through the system that we are putting together. We can route traffic from any one place on the face of the Earth to any other place on the face of the Earth really quickly without ever having to touch any other terrestrial interfaces.”

For example, the fastest terrestrial submarine link from London to Singapore is 198 milliseconds fully terminated, Abad-Santos offers. Across the LeoSat network, it would be 119 milliseconds. That’s a roughly 30 percent improvement on terrestrial fiber speeds. “And we are more secure. You don’t have to go through MAE-East or Singapore telecom,” he shares.

As to how the advent of 5G, or fifth-generation wireless technology, will impact its business model, Abad-Santos suggests that LeoSat is positioned particularly well with its rooftop-to-rooftop, MPLS-in-space architecture. “5G is not just a technology allowing for yet another boost in throughput,” he contends. “It actually will allow governments and enterprises to run entire applications wirelessly using this new technology. Consequently, security and latency for the entire end-to-end connection—so not just 5G access, but also backhaul—will become much more important than with 3G and 4G. It is exactly here where we have high expectations of 5G and we’re looking forward to working with the mobile network operators on this.”

In addition to pursuing subscriber agreements, LeoSat will be searching for the best manufacturing deal for its satellites. “While our compelling design and architecture has not changed in the past few years, technology has. It’s amazing to witness the technical breakthroughs in just the last few years, and LeoSat plans to allow its customers to fully benefit from these developments.” Abad-Santos states. The company is looking to sign a final manufacturing agreement this year. “And then we will start bending metal.”