Commander cites emerging hypersonic, ballistic missile threats to the homeland as the need for more advanced solutions.
By Kimberly Underwood 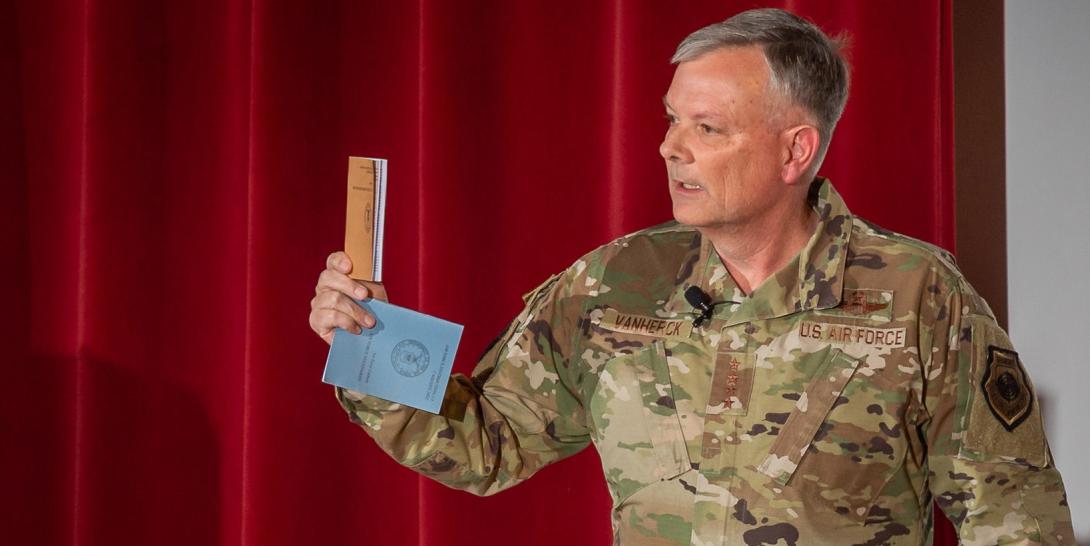 Gen. Glen VanHerck, USAF, commander, North American Aerospace Defense Command and U.S. Northern Command, pictured addressing cadets at the U.S. Air Force Academy on April 20, warns that it is not the speed of adversarial hypersonic weapons that is the problem, but their maneuverability. Credit: NORTHCOM/NORAD

It is the rising risks of adversarial hypersonic capabilities, amongst other threats, that are a problem, the general said. Russia has had a hypersonic missile since 2019 and China is rapidly making advances in hypersonic weapons, to the point that Gen. VanHerck sees the United States as trailing in its solutions. As part of his responsibilities as commander, the general has to provide sufficient warning should an adversary deploy a hypersonics weapon against the United States.

“What I'm most worried about in my NORAD hat, is providing threat warning, as my first mission is to provide threat warning, whether that be for an intercontinental ballistic missile, a cruise missile or a hypersonic,” Gen. VanHerck said. “And my second mission in NORAD is to provide an attack assessment, and hypersonics represents a significant challenge for me to do that.”

The Department of Defense has to develop appropriate hypersonics defense as part of the strategic deterrent, which is the foundation of homeland defense and carried out by the U.S. Strategic Command, the general explained. “We do need to defend against hypersonics specifically in a regional focus and the department is moving out with multiple efforts.”

The issue with those type of weapons, the commander said, is their maneuverability, which means at present, he is not able to provide any warning.

“As far as the defensive capability for hypersonics, it's a significant challenge,” he warned. “Hypersonics today apply a flight path that circumnavigates our current existing radars that are designed to detect ballistic missiles. In hypersonics, the speed is not what is so impressive. It is the maneuverability and the challenges they present by coming in at different attack vectors or different angles which allows us to not see them, candidly.”

Moreover, to confront cruise missile threats, the Defense Department is seeking from Congress an additional $50 million in fiscal year 2023 for a cruise missile homeland defense demonstration. The effort, assuming it is funded by lawmakers, will involve the examination of an emerging sensor capability, Gen. VanHerck shared.

The demonstration would be a live-fire test event, the general clarified. And it could be a solution that integrates with the U.S. Navy’s long-range surface-to-air interceptor. “I'm not necessarily asking for a specific capability such as a cruiser or destroyer,” he said. “What I want [from] industry, what I want with the Missile Defense Agency, the services to do is let their minds roam wild on capabilities to accomplish this mission. There are multiple ways beyond the kinetic end game to defeat this, and potentially be successful in cruise missile defense. And that could be through the use of the electromagnetic spectrum and other nonkinetic means to be able to do something beyond point defense and more a wide area defense or a limited area defense.”

The need for this type of defensive solution is urgent, Gen. VanHerck stressed. “I needed it yesterday,” he noted. “The threat exists today, primarily from Russia, their cruise missile capability from air platforms that can launch from over Russian territory throughout North America, and from subsurface capabilities that can park off our coast.”

The commander also sees the need to defend against potential adversarial cruise missile capabilities that could be on civilian container ships in the future.

“Five to 10 years from now, we'll be in the same place with China with other capabilities so, the urgency is there in my mind,” the commander said.

“I wish I could tell you that I had all the problems solved. What I will tell you is the environment we are operating in is the most dynamic and strategically challenging environment in my three-and-a-half decades of service. And it’s not going to get any easier. That is why we need to focus on defending our homeland. Five to 10 years ago, defending the homeland was not a challenge.”