By George I. Seffers 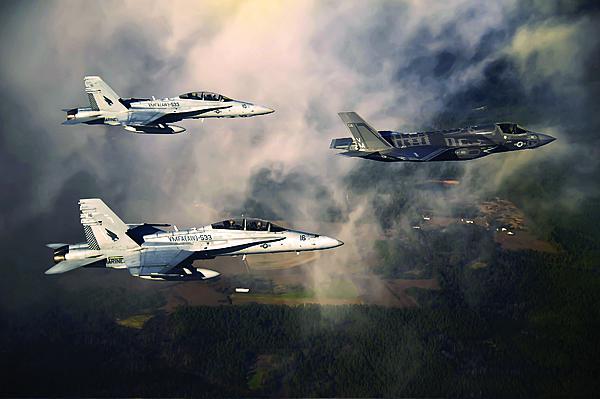 A U.S. Marine Corps F-35 aircraft is escorted by two Marine F/A-18 Hornets as it flies toward Eglin Air Force Base, Florida. Later this year, the Defense Department will establish a program of record to ensure communications between different generations of fighter aircraft, and that program will feed into the Joint Aerial Layer Network vision.

U.S. military officials envision one day being able to network together virtually all airborne assets, providing data to warfighters in the air, on the ground and at sea, even under the most harsh conditions. Major milestones in the coming months and years will bring that concept closer to a fielded capability.

The Joint Aerial Layer Network (JALN) is not an actual program. “It is a conglomeration of a number of different programs. It is absolutely a vision of how we’re going to transport information across many domains—air, space, terrestrial and subsurface—and across many different environments—an environment that is totally permissive; an environment that is contested; and an environment that is anti-access and actively denied to us,” explains Col. Anthony Genatempo, USAF, senior material leader for the Space, Aerial and Nuclear Networks Division, Air Force Life Cycle Management Center, Hanscom Air Force Base, Massachusetts. “The Joint Aerial Layer Network is a vision for pulling together lots of different existing networks and being able to route and transport required information to a much wider array of users.” For example, it would disseminate data from Link 16, a network primarily for fighter aircraft, or information gathered by drones, which currently is largely restricted to intelligence, surveillance and reconnaissance networks.

The JALN concept has been around for several years, but two upcoming events will push the vision closer to reality. The first will be the creation of a new program of record—the 5th to 4th Program of Record—in October of this year. The program is designed to ensure that fifth-generation fighter aircraft, such as the F-35 and the F-22, can share data with fourth-generation fighters, including the F-15 and F-16. With the JALN, officials hope to push the data on the fighter network down to warfighters on the ground. The colonel says he expects the program to provide an early capability in 2015 and “probably proliferating that out to the fleet anywhere from the 2017 to 2019 timeframe.” Officials are in the early stages of planning a similar program focused specifically on fifth-generation fighters, as well.

The second event will be establishing the Battlefield Airborne Communications Node (BACN) as a program of record. The BACN is one of the programs that feed into the JALN vision. It was developed as a joint urgent operational need in Afghanistan. “BACN is basically a flying relay between command and control and ground nodes that is able to go beyond line of sight—and in the mountains of Afghanistan that comes in very handy,” Col. Genatempo explains. The BACN ties together a number of disparate systems, including the Army’s Enhanced Position Location Reporting System, the Air National Guard’s Situational Awareness Data Link, Link 11, Link 16 and Link 22 networks, all of which the BACN can receive, translate and push out to other networks. “There’s a Link 16 network in northern Afghanistan, and there’s a Link 16 network in southern Afghanistan. By putting a BACN aircraft right in the middle of it, we’re able to pass that information from both of those networks to each other, so now there is an entire air picture in Afghanistan,” the colonel adds.

Because of budgetary uncertainty, it is not clear when the BACN will become a program of record, possibly in 2015 or later. But doing so, according to Col. Genatempo, will essentially declare BACN a communications weapon system, boosting its status and the status of the JALN as well. “In essence, Air Combat Command has declared BACN a weapon system in and of itself—not a secondary capability to go on its other weapon systems. It just happens to be a weapon system that is entirely communications networking based,” he declares. “To me, that’s a big deal as to why the Joint Aerial Layer Network also needs to be considered a weapon system.”

The JALN is a vast effort that Col. Genatempo describes as a “very, very large grand adventure,” offering a host of benefits to the warfighters. For one thing, it contributes to the air-sea battle, a controversial strategic concept for conducting war in the Asia-Pacific region. The air-sea battle concept calls for widely dispersed ships and airplanes pushing into highly contested areas. “The Joint Aerial Layer Network is tying together how air, sea and space assets effectively transmit data back and forth for command and control, intelligence surveillance and reconnaissance and targeting. That’s one example of where JALN is effective,” Col. Genatempo says.

Additionally, the JALN is being touted as a possible alternative to space assets if those assets become unavailable to U.S. forces. “The U.S. is reliant upon space assets for a number of different things—for voice communications, for data routing back and forth, for command and control assets, for intelligence assets, for Global Positioning System data being forwarded from ships to aircraft and to people on the ground. JALN is hopefully moving into the realm of being able to supply an alternative to an entire reliance on space assets. That’s a big part of the vision,” Col. Genatempo maintains.

The JALN vision also helps establish requirements for future airborne interoperability. “Our current platforms were never designed for network operations,” the colonel asserts. Right now, he adds, the military relies on gateway programs to link disparate platforms and allow them to communicate. “The Joint Aerial Layer Network takes that one step further to allow all of these programs to be interoperable with each other, hopefully without the need for gateway programs,” he says.

Moreover, the vision seeks to improve interoperability with coalition partners. For example, although U.S. forces have relied on Link 16 data for nearly three decades, some coalition partners are just now beginning to adopt the system. In fact, Col. Genatempo’s office is helping other nations implement Link 16. Anything that the JALN does for U.S. forces going forward, it needs to do for coalition forces as well, he says.

The JALN also offers benefits as available spectrum becomes more crowded, the colonel adds. “There’s only so much radio frequency energy in the spectrum that can be used between civilian and military purposes. The Joint Aerial Layer Network is going to be able to take that into account and manage that more efficiently,” the colonel asserts.

Furthermore, the JALN can help save money in tight budgetary times. “Having a lot of different, disparate networks comes with a sustainment bill attached. If I can somehow make more efficient the hardware, the networking capability and the networking management in a joint aerial layer, that has efficiencies in a resource-constrained environment,” Col. Genatempo states.

The BACN and Link 16 are only two of the systems that feed into the JALN concept. Others include the Beyond Line of Sight Command and Control program, which is designed to provide a tactical Wi-Fi capability through pods attached to the Reaper unmanned air vehicle (UAV); the Dynamic Retasking Capability, which provides threat data to cargo aircraft and allows for cargo airdrops to be redirected in flight, if necessary; and the Army’s Remotely Operated Video Enhanced Receiver, which provides UAV video feeds to laptop computers. “Those programs, which are funded programs of record, are all building blocks to the Joint Aerial Layer Network vision. We have satellite communications programs that are tying into an aerial network. We are trying to put communications nodes onto existing aerial platforms like the Joint Stars or possibly the Airborne Warning and Control System or other platforms, turning them into communications nodes,” Col. Genatempo reveals.

Meeting the vision requires that an array of technologies be further developed, the colonel offers. He cites waveform technologies, which historically have been developed individually for specific purposes and have not been designed to share data with a broad number of systems. Officials are considering a library of waveforms with different characteristics for carrying out different missions. If, for example, some warfighters need a waveform with a low data rate but high speed, and others need greater speed but not a lot of information, and still others need jam-resistant waveforms, they can all find what they need in the waveform library.

Cybersecurity technologies also need to be further developed. For example, military officials must determine how best to provide software and security updates to all of the different systems and platforms that will make up the JALN. And managing a network as large and complex as the JALN presents challenges. “When you start talking about the number of nodes in the Joint Aerial Layer Network, you’re getting into hundreds and hundreds of assets, all delivering different types of data and communications to different users at different rates, in different amounts and at different levels of criticality,” Col. Genatempo declares. “How do you manage all of that? That’s my biggest concern.”

Cost saving also is a big concern, which is why officials rely on existing programs and do not push for the JALN to become a program of record. “If I were to try to get my arms around a JALN program of record, I think that dollar amount would just be too large a pill for our nation to swallow,” Col. Genatempo says.