After several years of tight budgets, key European defense market sectors are poised for growth with satellite communications systems, major network infrastructure projects and battle management equipment on the shopping list. But analysts predict that market segments such as handheld tactical radios will either remain at current levels or shrink due to decreased sales.
By Henry S. Kenyon
New missions, requirements create demand for hardware and services.

After several years of tight budgets, key European defense market sectors are poised for growth with satellite communications systems, major network infrastructure projects and battle management equipment on the shopping list. But analysts predict that market segments such as handheld tactical radios will either remain at current levels or shrink due to decreased sales.

This loosening of national purse strings is the result of a combination of changes in the global strategic situation and political decisions to place NATO and European Union (EU) forces on an expeditionary footing. Command, control, communications, computers, intelligence, surveillance and reconnaissance (C4ISR) systems are crucial for military force projection to support both warfighting and peacekeeping efforts. The move toward a greater international presence by EU and NATO forces, coupled with a desire for interoperability, has compelled ’s governments to increase their spending in certain sectors of the C4ISR market.

According to Konstantinos Tigkos, a senior defense analyst with Frost and Sullivan, , European defense spending at the national level must be viewed on a case-by-case basis because while many nations are cutting their defense budgets, others such as the , and have increased their spending. He explains that Frost and Sullivan has divided the European C4ISR market into several sectors such as strategic and tactical military communications and command and control systems. All are areas where some level of growth is predicted.

Strategic communications is subdivided into three categories; satellite systems, long-range radio equipment and fixed communications. Tigkos maintains that the strategic communications sector is the only part of the European C4ISR market expected to experience substantial growth over the next decade as nations such as , , and the invest in major communications programs. These efforts include ’s Satcom BW and ’s Skynet. He notes that the ’s government has outsourced the entire Skynet program, taking financial pressure off the Ministry of Defence while providing a complete end-to-end satellite communications system.

Funding for Satcom BW is balanced between commercial and government spending. currently is leasing satellite services from the French military and from commercial vendors, but Tigkos observes that the Bundeswehr desires its own dedicated satellite communications capability. When it is complete in seven to eight years, Satcom BW will consist of two or three spacecraft and a ground infrastructure costing approximately $1.8 billion.

European commercial satellite services are expected to expand greatly over the coming years. Tigkos cites the unpredictability in the demand for satellite communications as a key driver for this growth. Because spacecraft deployments and required bandwidth cannot always be planned, many armed forces consider the use of commercial services as a backbone or a complement to their dedicated networks.

Commercial satellite systems also are using innovations attractive to military customers. One new capability is the broadband global area network (BGAN) offered by Inmarsat. BGAN provides L-band ultrahigh frequency (UHF) communications that have a performance comparable to X-band or Ku-band systems. “This means you will be able to have near streaming video but without having to deploy the bulky and heavy infrastructure required for Ku- and X-band terminals,” he says.

Strategic HF communications systems are deployed by , and . These networks also use other elements such as satellite communications interfaces and fixed infrastructure. Tigkos notes that the overall HF market is very small and driven by three factors: low cost, independent networks and long range. HF systems require very little in the way of infrastructure or support systems and they offer low operational costs when compared to satellite or fixed communications systems. HF also enables users to have independent networks without relying on outside commercial providers for services and maintenance. “It gives you an independent way of communicating without subjecting your communications either to market elements or to the costs associated with other solutions,” he says.

The combination of these factors makes HF a good choice for an entry or backup strategic communications solution, but he cautions that long-range radio communications are vulnerable to atmospheric conditions and require skilled personnel to operate. The overall European market for HF equipment and related services is expected to be approximately $170 million per year over the next decade.

Fixed communications is another major growth area. This subcategory consists of a variety of systems ranging from standard telephone systems to military message handling equipment. Tigkos notes that the market is being driven by the move to Internet protocol (IP)-based applications taking place in both the strategic and tactical arenas. He predicts that the transition to IP will provide European militaries with substantial savings. “What is the point of employing a traditional telephone system when you can use a Skype type of solution, which is free once you have your IP network ready,” he says.

IP-based communications infrastructure will benefit very small nations with limited budgets such as and , which may see annual savings in the hundreds of thousands of dollars. Large nations such as and the also are undertaking massive network backbone projects in the coming decade. These efforts include ’s Defense Information Infrastructure (DII) project and Hercules, the German equivalent of the DII.

Programs such as the DII and Hercules also indicate a growing need for integration services to reduce the number of defense computer networks. Tigkos summarizes these trends as a move toward IP, integration of systems and increased data transmissions from bandwidth-hungry applications, including improved battlefield sensors, image transmission applications and a growing demand for videoconferencing.

The fixed infrastructure market averages approximately $900 million per year. Most of this cost will be absorbed by major projects such as Hercules and the DII. Tigkos notes that Hercules is estimated to cost approximately $8 billion over a decade and will replace some 50,000 terminals throughout the German armed forces.

System integration is another facet of fixed communications with networks, nodes and infrastructure accounting for nearly 60 percent of the market, while 40 percent is devoted to services. Tigkos explains that in an average year such as 2008, Frost and Sullivan predicts approximately $596 million will be spent on nodes and networks and $387 million on services. He expects this acquisition pattern to remain relatively consistent up to 2014.

Combat network radios represent the second half of the land tactical system market. Manpack, backpack and vehicular HF, very high frequency and UHF radios are all included under this category. Land systems also represent trunked radio systems such as the ’s Falcon system (SIGNAL Magazine, October 2005). These are mobile broadband networks that rely primarily on radio communications but also use multichannel equipment and relays operating in super high frequency (SHF) and satellite-based UHF relays. Another segment of the ground environment is what Frost and Sullivan classifies as “other” tactical systems such as datalinks and dedicated artillery data transmission networks.

Tigkos does not anticipate the appearance of another system similar to Bowman or Falcon in the near future, noting that this market is expected to contract substantially because most of ’s armed forces already have modernized their tactical communications systems. Although the market for land tactical systems was close to $2.2 billion per year between 2003 and 2006, he predicts that it will decline from 2006 through 2010 to approximately $1.5 billion per year.

The remaining major tactical communications modernization projects are occurring in . The largest of these programs is ’s MOKYS tactical communications system, which Tigkos estimates will cost approximately $200 million over the next decade. “This is quite a substantial project, but at the same time, we do not see this happening in other countries,” he says.

The European tactical communications market also will be affected by a new generation of combat network radios (CNRs) that will become available over the next five years. Typical examples of these new systems are the Tadiran CNR 9000 and the Rhode and Schwarz Multimode Multirole Multiband Tactical Radio, which is a partly software programmable radio. Tigkos believes the introduction of software-defined radios (SDRs) will make a major impact on the market, but he does not expect them to become widely available until after 2010. “The players that are here now and have achieved a time-to-market advantage are the ones who are going to possibly dominate this market,” he predicts.

Other SDR systems include the Thales multiband inter/intra team radio (MBITR), which has been sold to and . He notes that it is a successful radio and unless a Joint Tactical Radio System (JTRS)-specific radio soon enters the market, these types of radios will dominate the handheld domain. The MBITR is an aspect of many international firms seeking to interoperate with systems. “Most countries having a software-defined radio procurement or development program see it as very important to have an SCA [software communications architecture] compliance, which in this case would be a JTRS compliance. Because what is the point of buying a software-defined radio if you don’t form the basis for future interoperability?” he shares.

The command and control (C2) segment of the C4ISR market is characterized by growth and decline in different sectors. Major growth is expected in the vehicle battle management segment. Tigkos explains that almost all of ’s armed forces will be purchasing vehicles over the next several years and they will require modern C2 equipment. “What is the point of buying an armored fighting vehicle costing $2 million or $3 million and not putting in a $15,000 battle management system?” he asks.

The vehicle battle management and air defense command and control segments of the C2 market are expected to total $5 billion over the next decade, with an annual spending average of $500 million. Tigkos explains that a key difficulty for many nations is integrating a variety of different weapons and sensor systems into a single C2 network. He notes that the Greek military uses 12 different air defense systems from a variety of nations, including , , and the . “They will have to spend a lot of money to put everything together, considering that the Russian equipment presents substantial problems to integrate with European systems,” he says.

Major spending on strategic C2 is focused on large systems in , and the . Tigkos notes that these efforts seek to integrate all of a nation’s networks and communications into one system. But this market is not very large because many nations do not have these integration programs set in their near future spending plans. Spending is predicted to average approximately $60 million to $70 million a year. He notes that 90 percent of these costs represent projects in , , and . Most of the major C2 integration spending is focused on and , with being the only nation that has allocated substantial funds for integration. Approximately $260 million already has been invested in its Maitrice d’Oeuvre d’Ensemble des SIC Terre program (SIGNAL Magazine, September 2005). 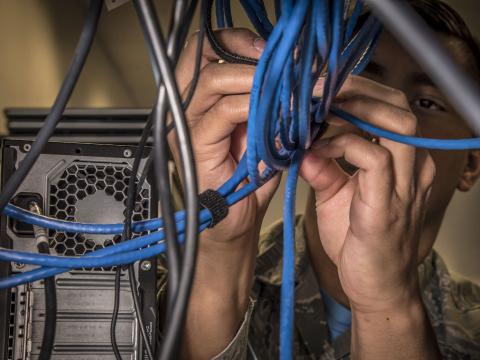