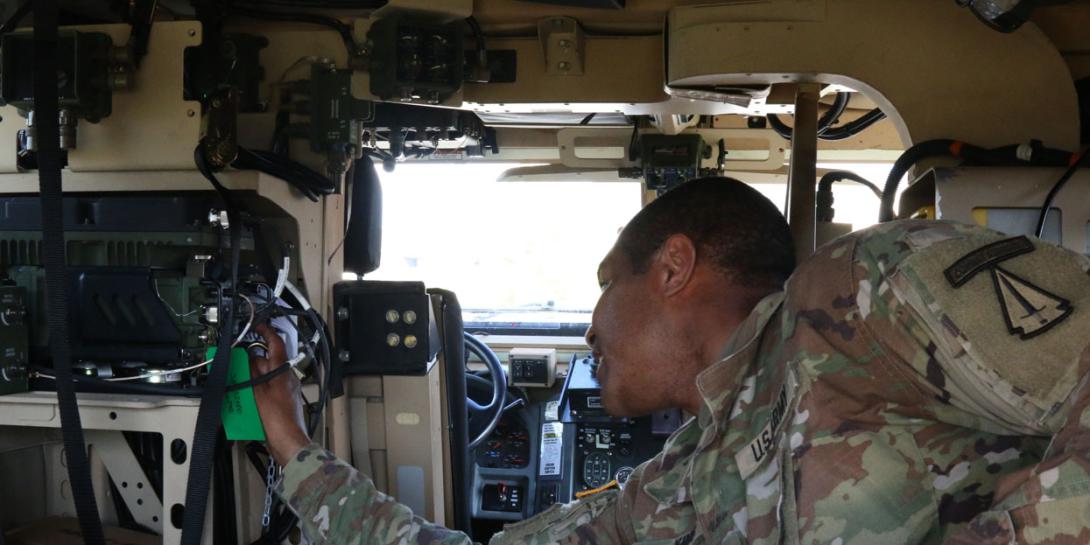 During the radio rodeo, the C5ISR Center places industry radios into an operationally relevant field environment to assess their ability to operate on the move in a contested, multidomain environment. (Photo Credit: U.S. Army Photo Courtesy of PEO C3T)

The modernization, proliferation and commoditization of electronics make contending with peer and near-peer adversaries more difficult, according to Chuck Hoppe, director of science, technology and engineering at the U.S. Army’s Combat Capability Development Command C5ISR Center. “For every good thing we bring out of technology, someone inevitability wants to use it for nefarious purposes. That has been the biggest change in the past 20 years, and it’s what made things significantly more deadly and lethal,” he says.

For example, a recreational unmanned aerial system from a discount store accessorized with junkyard parts could arm a malevolent nonstate actor with an airborne chemical dispersal system for less than $400, he explains.

Hoppe says easy access to high-tech capabilities makes future battles with nonstate actors a “different kind of fight,” but the U.S. military also now must refocus on near-peer adversaries. Countries such as China and Russia can deploy similar capabilities and wreak more havoc than warfighters faced in counterinsurgency operations.

Citing recent tactics in Crimea, Hoppe describes how Russia used readily available technology for intelligence, surveillance and reconnaissance (ISR). “In a period of about 15 minutes—the artillery barrage probably lasted less than six minutes—an entire Ukrainian motorized mechanized brigade just disappeared. The initial ISR for that was a small drone. By the time [the Ukrainian forces] saw the small drone, it was too late. They … didn’t realize what was happening. But then the Russians did what Russians do: They’re an artillery army, and they rained down a bunch of rocket-launched systems,” he related. Near-peer enemies using technologies in this way has changed the way the U.S. military has to fight and protect its forces, Hoppe adds.

Easy access to technologies isn’t the only new challenge the U.S. military faces. While air, sea, space, land and cyberspace are considered the traditional zones in multidomain operations, Hoppe says the electromagnetic spectrum is the most congested, contested environment within which the military must operate.

“That's in the non-kinetic environment. … We go into a kinetic fight someplace where now we have the potential of electronic warfare assets, or people are deliberately trying to deny, degrade and disrupt the use of that RF spectrum, plus you still have everybody else transmitting, it gets very, very hard very quickly," Hoppe explains.

In addition to spectrum availability, the center also is examining new technologies on the horizon and how they could affect military operations. For example, 5G is coming on strong. "We are probably not going to take a 5G set of powers with us because we have to take our infrastructure with us. But there are pieces—millimeter wave, MIMO antenna technologies—we can take advantage of tactically and operationally and use them without going to a 5G solution,” he says.

The commercial sector is integral to the C5ISR Center’s success, Hoppe maintains. “Industry and academia both are key partners for all of us. We cannot do this in a vacuum,” he states. The center is constantly determining the best ways to bring companies into the conversation to marry their solutions with the gaps it sometimes has difficulty articulating, Hoppe admits.

One way the center is addressing this challenge is by engaging industry on a continuous basis through long-standing Broad Area Announcements (BAAs) that can run for five to seven years. As a result, even if a company can solve only part of the problem a BAA describes, it can send a white paper to the center where personnel will evaluate it, and the conversation can begin.

Hoppe explains it’s acceptable to continue the exchange with the company because of the open BAA. “We’ve already met the competition and contract requirements, so we don’t have to put out another RFP [request for proposal] on it,” he expounds.

The center also has found other creative ways to discover solutions. For example, to address multiple needs from cross-functional teams, it developed the Radio Rodeo. Through requests for information, BAAs and cooperative research and development agreements (CRADAs), the center brings together companies with solutions that are mature enough to solve current and quickly emerging problems in the weeklong event. The next event will take place in spring 2020.

The C5ISR Center also is a huge user of the Small Business Innovation Research (SBIR) program, Hoppe relates. His advice to small companies is to watch the BAAs for opportunities because the center usually has at least 30 approved SBIR announcements posted and generally awards at least two Phase 1 small business contracts for each BAA it publishes.

Hoppe emphasizes that constant communication among military organizations and companies is key to ensuring research and development dollars and resources are spent in the right places. “It’s a kind of push and pull. The center lives in that space. Requirements can push the technology, but the technology can push the requirements,” he states.

Chuck Hoppe and other members of the C5ISR Center, which is located at Aberdeen Proving Ground, Maryland, will be discussing science and technology to ensure multidomain operational success at TechNet Augusta in Georgia on August 23.