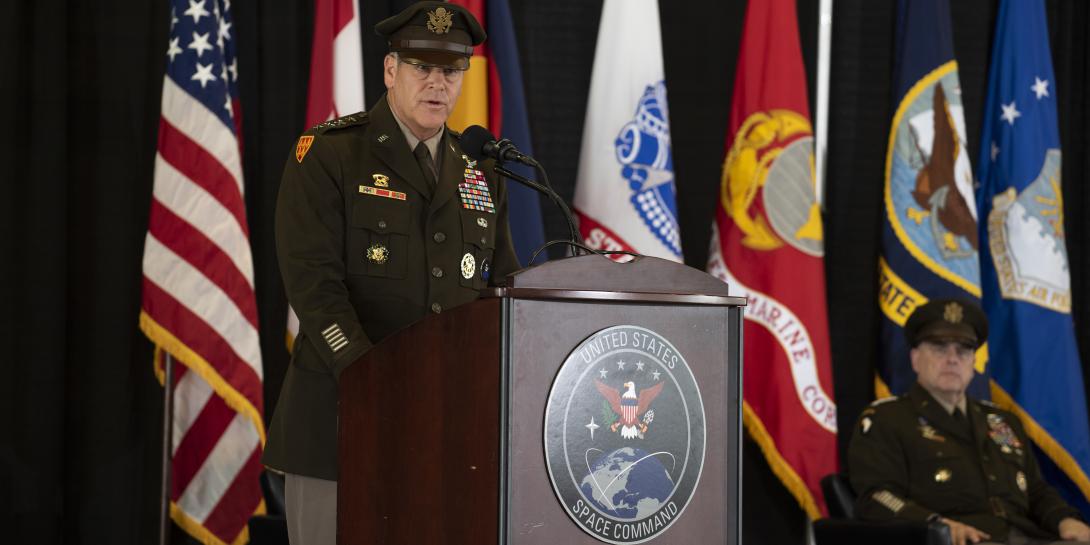 In a changing of command ceremony yesterday at Peterson Air Force Base, Colorado, Gen. James Dickinson, USA, stepped into the role as commander of the U.S. Space Command.

Gen. Dickinson takes over from Gen. John Raymond, USAF, who ushered the new Space Command—which is the nation’s 11th Combatant Command—through its reestablishment last August. Relinquishing one of his two hats, Gen. Raymond will still continue in his role as the first Chief of Space Operations for the U.S. Space Force.

At the same ceremony—which was recorded and broadcast via a Defense Department video and hosted by Defense Secretary Mark Esper—Gen. Glen VanHerck, USAF, replaced Gen. Terrence O'Shaughnessy, USAF, as commander of the North American Aerospace Defense Command, or NORAD, and commander of the U.S. Northern Command. Gen. O'Shaughnessy is retiring after 34 years of active duty.

“The past three years on the Joint Staff have been a leadership laboratory,” Gen. VanHerck said. “[It has been] a privilege to serve with some of our nation’s finest during that time, as we’ve navigated undoubtedly the most challenging national security environment in my 33 years of service.”

Gen. Raymond, with his bold vision and 36 years of service “steeped in space operations,” has successfully led “the [Defense] Department’s most significant transformation in history of our nation’s security space program,” Secretary Esper said. The general’s expertise will continue to be needed at the helm of space operations, he added.

Secretary Esper emphasized that the United States’ space-based capabilities, such as the Global Positioning System, have provided a decisive edge for warfighters, and have become part of everyday life for citizens.

“Yet we now find that space has become highly contested, and the gains we possess are threatened,” he said. “Moreover, as we continue to push the limits of  science and innovation, we recognize that our competitors are seeking new ways to exploit our systems and undermine our advantage. We know for example, that China and Russia are weaponizing space through the development of anti-satellite missiles and directed energy weapons and more. They have turned a once peaceful arena into a warfighting domain,” added Secretary Esper.

As the new commander of Space Command, Gen. Dickinson will continue Gen. Raymond’s trajectory of ensuring open access to the space domain. He will lead combined forces at the military’s space component command to provide space effects to warfighters, with effects that are fully synchronized across all of the commands and allied combat operations.

“It is important to note that space is a warfighting domain,” Gen. Dickinson said. “Not because we want it to be, but because our adversaries have seen the advantages space has provided to our way of life and our way of war, and they constantly seek ways to hold our assets at risk.”

“This command is tailor-made to focus on enhancing our ability to conduct offensive and defensive operations in space and to further strengthen our partnerships with the intelligence community, with our allies and to enhance global warfighting, and integrating more seamlessly with our combatant command partners,” Gen. Raymond noted.