The NRO Looks Down to Look Up

The reconnaissance agency is focusing on its ground architecture to boost capabilities for its customers.
By Robert K. Ackerman 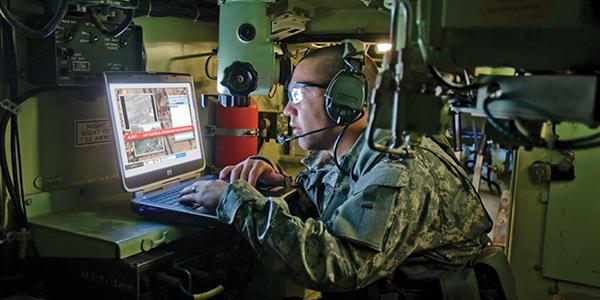 A soldier looks at intelligence data via the Distributed Common Ground System. The NRO’s Future Ground Architecture aims to revolutionize the capabilities of NRO assets available to ground users.

The organization tasked with deploying and maintaining orbital reconnaissance assets is working on improving its ground architecture to keep those space-based capabilities relevant amid a changing threat picture. The National Reconnaissance Office, facing stringent budget pressures, is counting on architecture and technology advances on the ground to enhance the capabilities of existing platforms hundreds of miles above the Earth.

Funding cuts have forced the organization to look away from its orbital assets to keep up with the pace of change in customer demands. With an acquisition time of at least seven years for space-based hardware, the National Reconnaissance Office (NRO) has shielded research and development from budget cuts so it can be ready to produce a new generation of space hardware when needed. But meanwhile, new threats have emerged that require immediate response in terms of customer requirements as well as resilience.

The pace of change has become a major issue in developing technology assets and capabilities, points out Betty J. Sapp, director of the NRO. Targets and threats have been changing, and the NRO always has dealt with this. But now, the office is after a very different target set today, and that requires constant innovation and capability evolution.

Targets are something the NRO always has focused on, but threats less so, Sapp allows. Now, the focus on threats has increased dramatically. This new emphasis includes the way the NRO flies its vehicles and the way it is seeking the next capabilities in space.

The NRO has its own set of threats to address when it comes to its space assets. Russia and China recently have done “some things that concern us a lot,” Sapp says. Even smaller nations have access to technology, such as jammers, that can wreak havoc with space-based assets and capabilities. “We’ve always had to be pretty hardy to survive in space,” she says. “It requires us to be much hardier for the future.”

To continue its omnipresent capability in space, the NRO must withstand these space-oriented threats, Sapp declares. “We’re changing in space. We understand the threats we face, and we’re changing space capabilities to meet those threats—and we’re going to be better on the ground.”

Sapp offers that the NRO launches “dumb spacecraft” with the smarts provided by the ground elements. Vehicle capabilities can be updated by software, and ground activities can improve spacecraft capabilities. “I have things I can do now on the ground with what comes off the spacecraft that I never could do in the past,” she says. “Ground is critical in both cases.”

She continues that the NRO always has been good at innovating space capabilities. “We do that again on the ground in new processing and new software for flying systems. We innovate for every new system we build—some have the same name as a predecessor, but they look and act differently.

“We have been less good on the ground,” she admits, noting that the focus on space systems was not unusual in the era when the NRO connected space assets directly to specific ground antennas and mission ground stations. Those ground assets were unique to their space counterparts, but that is a luxury that is both unaffordable and undesirable with today’s pace of change.

At the heart of this improvement is the NRO’s Future Ground Architecture. This architecture will give the NRO the capability to adjust to new threats, enhance space-based capabilities as needed without launching new assets and improve delivery of services. It is a key to the office’s ability to keep up with the rapidly increasing pace of change, Sapp declares.

“We want to be able to take fuller advantage of our complete space-based architecture,” she offers. “Ground has to allow us to operate those space capabilities more as an integrated whole.”

She cites an experiment now in limited operations known as Sentient. It is demonstrating the power of using the full architecture against a problem set by doing automated tipping and cueing from one sensor to another—acting at machine speeds, not at the pace of humans. “I can see the strength of that [complete ground system approach] when I look at Sentient in even the way it is behaving in operations,” Sapp states.

Saying Sentient is doing a very good job of getting new capability out of existing assets, she allows that more people from the defense and intelligence communities have come to the NRO to view the system’s demonstrations than for any other capability since the beginning of the organization’s history. “It is demonstrating the capabilities we want throughout our Future Ground Architecture,” she offers, adding that these capabilities probably will become operational in the year 2020 or beyond.

For all technology-oriented agencies, funding is a major hurdle. Sapp points out the office always has struggled to find enough funding to do what it needs to, but the growth of other challenges has increased this need for funding at time when money is tight. “The whole IC [intelligence community] has taken a big budget challenge,” she says. “The NRO has taken a larger proportionate reduction, simply because the rest of the IC agencies are largely people-driven. The NRO buys systems, and those are easier to reduce and the impact isn’t felt for some time—the seven years out when we would have delivered something and we’re not delivering it then.”

The budget constraints are hurting the NRO’s efforts, Sapp admits. “We really needed to invest recently—not only in keeping up with targets … but also in our own resilience. That is a new area for which we have not received necessary new funding; in fact we had to put it in with an overall and fairly substantial budget reduction. It’s required some very hard trades,” she says.

She agrees with the oft-expressed sentiment that tight budgets spawn greater innovation. “We made some changes in our overhead architecture that will actually satisfy most of the mission,” she relates. “We’ve had to make some trades with our users and our mission partners, but for substantially reduced costs.

“But after a while, even an innovative group like the NRO runs out of ideas and starts delaying programs, and that’s hard on our industrial base and on the users who are very reliant on those capabilities. It ends up taking more risk with continuity on orbit,” she warns.

The NRO places great emphasis on its research and development (R&D). “We have maintained our R&D,” Sapp states. “R&D for us is not a nice-to-do, it’s a must-do. Not only does it help us keep pace with those targets and threats, but it helps us do that and have acquisition programs that are still successful—that have a risk posture that is something we can deal with in a defined cost and schedule.”

The NRO maintains its R&D efforts, and it maintains its operations because they are today’s mission. Sapp says the NRO protects R&D in its budget. What suffers from tight budgets are acquisition programs, which become stretched out or reduced in scope—or both.

Its R&D focus is on technologies and capabilities that are unique to the NRO, she explains. The office increasingly counts on industry for communications, computing power and satellite buses, for example, while it concentrates on sensors.

When the NRO adds new capabilities, they tend to be improvements within the office’s existing mission as opposed to new –INTs. Sapp says the office always is looking for “more sensitivity, more capacity, more diversity—the things that we need to go after the modern problem sets.” The new ground capabilities would help take advantage of these, she adds.

The one change the NRO cannot make from the ground is space hardware, so it puts as much capability into the hardware as possible, Sapp says. The software is designed to be adaptable because the platforms fly for several years and their targets change underneath them. The adaptable software allows the space-based assets to be upgraded for technology advances or new missions.

The size of a space asset is driven by mission need, she points out. Some needs require a large sensor that cannot fit on a small spacecraft, while other needs demand lots of well-distributed small sensors. The NRO builds those extremes as well as everything in between, Sapp states. “We do everything—all sizes, all shapes.”

She observes that the NRO has a variety of R&D partners among national laboratories, academia and industry. The organization has ways of bringing in new providers who lack all the necessary clearances to work directly with the NRO but who would be able to contribute new technologies and capabilities. “We want as big an aperture as we can possibly take for new ideas,” she allows. The Director’s Innovation Initiative (DII) is one way the office can examine new ideas, pursue those that work out and transition them into the organization.

Sapp’s biggest request of industry is not technological but instead cultural. “What I want most from them is more in terms of behavior,” she allows. “I want from them the same behavior Congress wants from me—good performance and transparent communications.

“The NRO doesn’t build anything at Westfields [the NRO headquarters location],” she adds. “We go through our industry partners, and they are part of our team. … Once we get past negotiating and we decide we are going forward on something, the folks on the contractor team who actually work the programs are as mission-focused as our folks are. They are very dedicated to the mission, and we like that.”

She continues that the NRO has told its industry partners that the office wants to spend its R&D money on sensor capabilities. It does not want to spend money on new buses, and it wants to spend less money on communications and information technology. Instead, the NRO wants to leverage the commercial marketplace for those and focus on sensor capabilities that are unique to the NRO. This is a change from the past, she allows, but the office is reinforcing it repeatedly in its interaction with industry.

Sapp says the NRO in five years will be more capable and more resilient in orbit, and it will be far more able to take advantage of these space-based capabilities on the ground acting as a more integrated whole. The office’s work force also will change in five years as it becomes more native to the NRO and less borrowed from other defense and intelligence organizations. With the assistance of Congress, it has begun a work force stability initiative to transition a part of the work force to in-house.

Sapp wants more stability in the engineering work force, which would help in an organization that specializes in acquisition programs that run over seven years. The NRO is concentrating on the CIA and Defense Department engineering elements of the work force. The CIA portion already has been approved, she reports, and the NRO has received approval on the defense aspect from the secretary of defense. 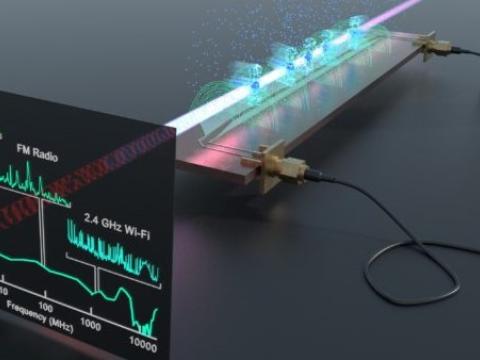 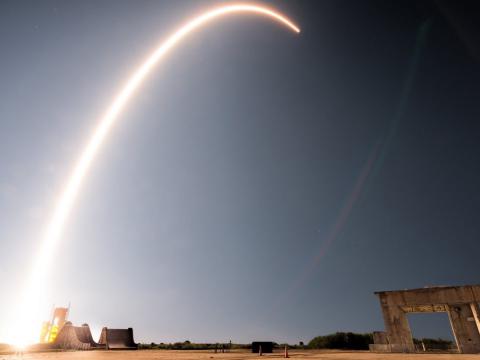