The Pursuit of a Robust Mission Partner Environment

Joint Staff leader advances how the United States will bring its allies and partners into information sharing in the JADC2 environment.
By Kimberly Underwood 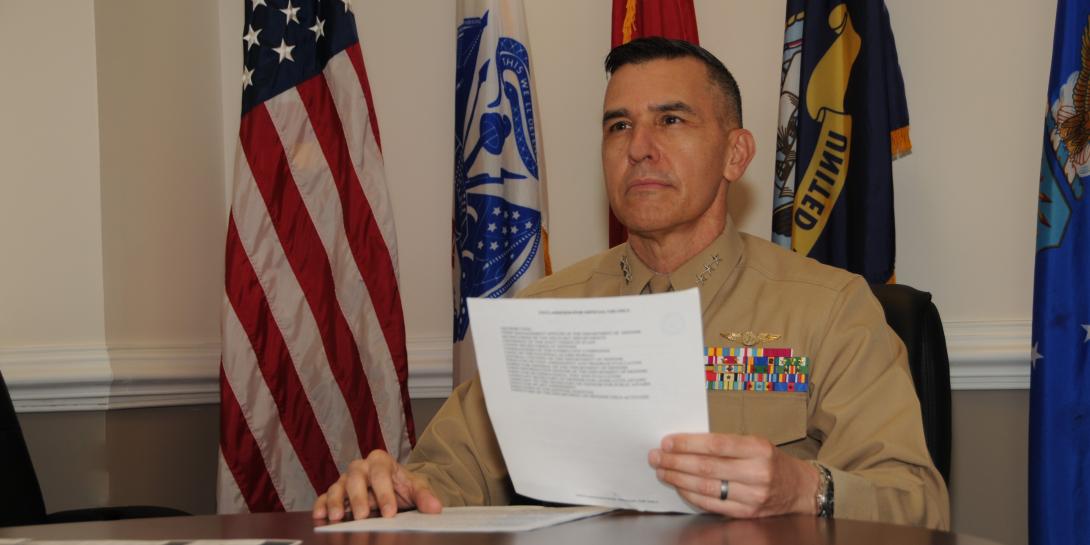 The U.S. Department of Defense is progressing in its efforts to address how it will fight in a joint all-domain warfighting environment. At the center of that work is how to build a Joint All Domain Command and Control (JADC2) platform, and one in which allies and partners can effectively communicate and operate as well, explained Lt. Gen. Dennis Crall, USMC, director for Command, Control, Communications, and Computers/Cyber and chief information officer, the Joint Staff, J-6.

Gen. Crall, who presented a keynote address on the second day of AFCEA’s TechNet Indo-Pacific conference, running virtually March 1-3, emphasized that from the beginning, the DOD is building its JADC2 environment to reflect the crucial role of allies and partners.

“It is about joint and coalition interoperability,” Gen. Crall stated. “We will not fight alone, and we know that information sharing and information sharing at speed is really critical for the type of fight, especially in the theater that we are describing. So, we are building JADC2 with partner input.”

For the industry helping to build solutions, this means that the DOD is pursuing the creation of a Mission Partner Environment (MPE) that actually supports joint and coalition interoperability, the general noted. Their effort already is underway, and it will be different than any previous missteps.

“For those who have tracked the Mission Partner Environment and some of the Pentagon’s efforts, my guess would be when we talk about the MPE you may have the idea, ‘Well here we go again, we've been down this road before and we've always promised to bring partners into the development of these capabilities early,’” Gen. Crall recognized. “You know for reasons either explained or unexplained it seldom had happened. But part of the drive here, if not the central piece to this, is that we've made a commitment to our partners, especially our Five Eye partners [Canada, Australia, United Kingdom, New Zealand and the United States] that we will not do this as a bolt on. We will do this in real time as we develop what was is now shaping up to be the key elements of JADC2.”

The focus so far for the MPE is being able to share information classified on the secret and below releasable environment, known as SABRE. “We've laid out the foundation for that,” Gen. Crall reported. “We have a series of five sprints, one of which is already completed and four of which are going to follow quickly.” At the Bold Quest 21 experiment planned for September, the DOD will test exchanging SABRE information with partners under certain conditions “and at distance.” The idea is to gauge the speed and accuracy of such an exchange, he specified.

DOD also is leveraging the Combined Communications Electronics Board—which has been around since the 1940s—to identify with the Five Eye partners and other nations any JADC2-related capability gaps for the MPE, Gen. Crall said. Some of those gaps that the United States and the partners will work on include solutions for assured identity, data tagging and labeling, communications security, and encryption.

“One of the most productive products that has come out of that [board] was the strategic alignment initiative that took the strategic objectives, pairing them with the JADC2 effort and [identified] 11 critical prioritized mission gaps that we've all agreed we must fill, which goes a long way to informing the MPE,” the J-6 explained. “With limited assets, limited experimental capabilities and timelines, this provides us direction to work on the right things at the right time with the right funding.”

All domain warfare does include Space, so increasing security, advancing encryption and protecting the terminals. Making sure that space domain assets are modernized is a high priority for their role in #JADC2, says Lt. Gen. Dennis Crall @USMC #J6 @thejointstaff#AFCEATechNet pic.twitter.com/yXv86kSeCs

In addition, Gen. Crall identified four main areas in which the industry can aid in providing solutions. “We sat down and brainstormed about where we think we need the most help, and we [do] need it now,” he said. Those areas include data tagging conventions, data interoperability, identity management and agile software development.

“As we start looking at exchanging information in a coalition or joint environment, that data has got to be tagged at near or real-time,” he stipulated. “We have huge repositories and sifting through things after the fact won't help us with the speed of the fight.”

Regarding data interoperability, the J-6 is looking at something else than strict standards. Instead, the DOD is looking for data tagging and sharing capabilities. “You'll notice I won't use the word ‘data standards’ maybe as much as I have in the past because that's quickly becoming somewhat pejorative,” he acknowledged. “Standards or building to really rote or concrete designs that are subject to change always makes us shooting behind schedule. [It is] tagging what we can tag but also making sure that we have a quick means to bridge that data to make it useful, and we can exchange it again at speed.”

For allies and partners to have access to JADC2-related information during operations or exercises, the DOD must have adroit identity credentialing management solutions, or ICAM. “It makes it difficult on the tactical edge if I can't verify the user to match that data at the point of need,” Gen. Crall said. “We've struggled in the department for at least a decade on a viable ICAM solution and to be fair in my estimation we still don't have one. It's also the bedrock of artificial intelligence, for us to bring artificial intelligence and cloud-based operations into reality.”

Regarding identity, credentialing and management (ICAM), unless we have credentialing that works, we can't match our users to data #JADC2, says Lt. Gen. Dennis Crall @USMC #J6 @thejointstaff#AFCEATechNet

Lastly, the department is searching for additional agile software development solutions. “We have a renewed focus and probably less tolerance than we've had in the past on a demand that we want software that can be containerized, that can be upgradeable, that is truly built in the agile manner,” the J-6 stressed. “It's high time that we start looking at software as an industry and not as an afterthought.”