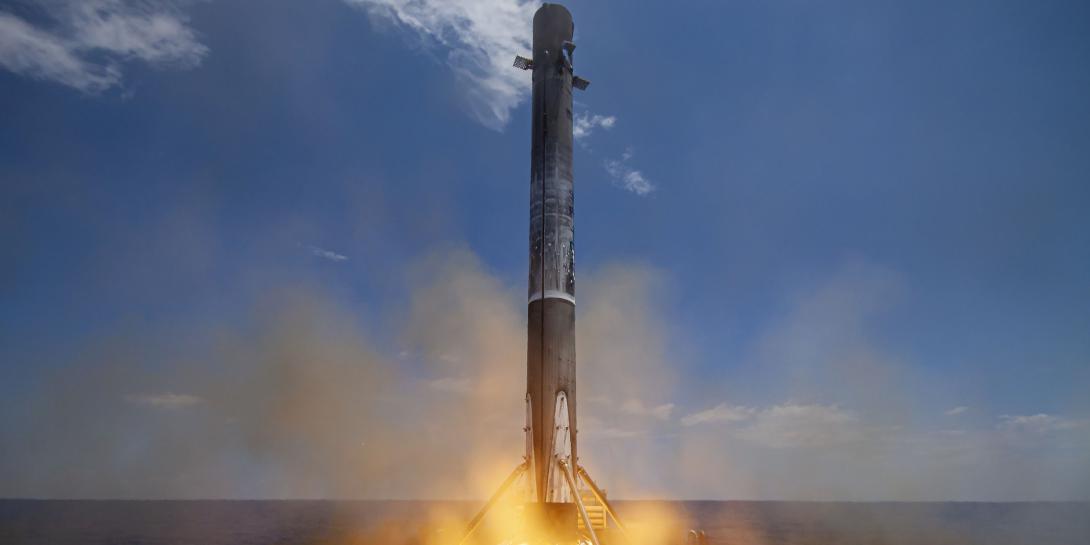 Space X’s Falcon 9 first stage rocket returns to Earth on June 21, landing on the Just Read the Instructions droneship after launch of the military’s GPS III-5. Space X is preparing for a June 25 launch of key satellite and experimental equipment for the Space Development Agency, as part of a greater Transporter 2 mission set. Credit: SpaceX

The Space Development Agency is progressing in its promise to quickly build and operate advanced space systems that address urgent communication and mission needs for the military. The agency, known as SDA, has a plan as part of its Tranche 0 effort to provide proliferated low-earth-orbit constellation of satellites and sensors that will connect to the military’s tactical legacy datalinks and weapons systems to deter against advanced threats. As part of this effort, SDA is ready on June 25 to launch via Space X's Falcon 9 rocket three optical communication-based experiments across multiple satellites. This level of experimentation will help inform the agency how to progress in its greater effort, senior space development agency officials report.

Several senior officials from the SDA held a briefing with the press on June 22, explaining the agency’s plan for experimentation.

“There's nothing in the space business that gets your blood pumping like the idea of a launch, especially if you got multiple satellites, and this is the first time that I've been a part of something with this many satellites and this many experiments,” a senior SDA official stated. “It is typically one experiment and a couple of satellites.”

The agency is conducting three separate experiments over the next year, including Mandrake II, the Laser Interconnect and Networking Communications System (LINCS), and POET.

The Mandrake II and POET efforts are extensions of the Blackjack program from the Defense Advanced Research Projects Agency (DARPA) and the Air Force Research Laboratory (AFRL), which developed 20 low-earth-orbit (LEO) globe-to-globe satellites to demonstrate a new way of building out space system architecture. The mini constellation included autonomous systems and powerful edge computing to create a more resilient space system. The autonomy software, in particular, was meant to demonstrate autonomous orbital operations including on-orbit distributed decision processors for advanced satellite management, according to DARPA.

For the Mandrake II experimentation, the SDA is using SA Photonics terminals. “The main thing we're looking at with these—they are laser-based obviously—so we're trying to figure out the acquisition, the pointing and the tracking,” a senior SDA official explained. “Can we make the connection? Can we hold that connection? And can we exchange data between two terminals in space with that connection.”

The agency will be testing the terminals up to distances of approximately 2,400 kilometers (or 1,500 miles). “We're going to try to send data essentially from [Washington,] D.C. to Denver at the speed of light and that is what we're going to bring to the warfighter over the next several years,” the official noted.

The laser-communications-based LINCS effort—“is a very similar kind of experiment” to the Mandrake II—and involves General Atomics’ optical communication terminals. SDA will test the terminals’ ability to move information in space to space. And in a further partnership with NASA, the agency will test General Atomics’ terminals to the ground, to Table Mountain, California.

“And we just kicked off another effort with General Atomics that is going to be an offshoot of LINCS,” the official shared. “We're actually going to test the terminals to one of General  Atomics’ MQ-9 drones early next year. We're going to test space to space, space to ground and space to air, with any luck.”

The officials stressed that the ability to conduct space-based experiments to inform its great LEO constellation plan hinges upon industry solutions, but not vendor lock.

“SDA believes in building markets,” said a senior SDA official. “We believe in building industrial capacity to do the kinds of things that we need to do. As we proliferate across LEO, we know beyond a shadow of a doubt that we can't depend on a single vendor for a key technology. So, we want to make sure that multiple vendors have the capability of building the systems that we need and that the warfighter needs.”

The POET experiment, meanwhile, is something of a last-minute decision for SDA. The agency will place a battle management capability on board the so-called YAM-3 satellite being built by Loft Orbital. The SDA will test the ability to perform data fusion as part of the battle management capability that includes placing data, edge computing and algorithmic systems in orbit.

“We kind of jumped in on something that had been ongoing,” the senior SDA official stated. “We inherited a Small Business Innovation Research program from DARPA again, and what we're going to do is put an offshoot of a Blackjack Pit Boss effort onto what is called the YAM-3 satellite. And as we look to proliferate and look to lower the latency of moving data from Point A to Point B around the globe, we have to move more and more of the processing into orbit to actually accomplish that.”