Sea Services Must Span the Globe on a Local Budget

Cutbacks are everywhere except in mission requirements for the U.S. Navy, Marines and Coast Guard.
By Robert K. Ackerman 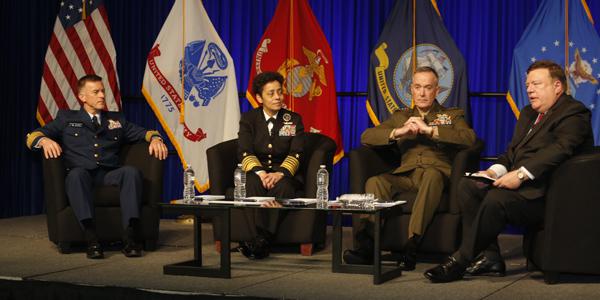 Being asked to do more with less is illustrating that less is not more for global obligations. The U.S. Navy, Marine Corps and Coast Guard are struggling with the hard reality that, in this era of dynamic geopolitics and changing targets, sometimes less is less.

Budget cuts compelled by the congressional sequestration bill and post-war defense reductions have trimmed the military to a force that may not be able to meet its newly expanded mission needs even when teamed with the best innovative thinking. Some existing equipment is nearing the end of its operational life and must be replaced. New types of adversaries and operations require a revamping of hardware and capabilities at a time when resources are scarce.

These self-imposed limitations serve as a backdrop for new challenges that would be vexing even in the best of times. A host of potential adversaries are closing the technology gap that the United States has enjoyed since World War II. Their threats can range from force-defeating capabilities wielded by nation-states to individual cybermarauders who could conceivably bring down the entire nation’s economy.

These challenges, along with potential solutions, were the focal point of discussions at West 2015, held in San Diego February 10-12 by AFCEA International and the U.S. Naval Institute. Speakers and panelists from government, the military, academia and industry contributed to discussions that included audience questions submitted by mobile handheld units, tablets or laptops.

The theme of the three-day conference was, “Lower Budgets and Higher Demands: How Do the Sea Services Strike the Right Balance?” A definition of this new era was offered by Adm. William E. Gortney, USN, commander of the U.S. Northern Command and the North American Aerospace Defense Command. He began by explaining how this post-war era differs from its predecessors. Amid previous post-war budget cuts, the United States found itself in better security environments than it does today. With sequestration adding strict budget pressure, the force runs the risk of not being able to do what is asked of it.

“The force does not get hollow by the flip of a switch, but by inadequate resourcing combined by two wars and today’s security environment,” the admiral said.

Some of the ramifications of this development were offered in a candid address by Deputy Secretary of Defense Robert O. Work, who warned that the U.S. military will need several years to reset and rebuild. Plans originally called for a two- to three-year reset after withdrawal from Southwest Asia, but new crises have rendered those plans inoperative.

“This past year has shown us we cannot be ready for just one thing,” Work said, reflecting on the many changes and crises that have emerged. “We’re doing a running reset—building the airplane while it’s flying.”

It will take the U.S. Army, Navy and Marine Corps until the year 2020 to get back to full spectrum combat readiness, even if the federal government abandons sequestration limits now. The Air Force will not be able to attain its full readiness until 2023, he stated.

Work declared that sequestration must be overturned quickly. Saying that keeping defense spending at sequestration levels “would be a disaster,” Work noted that the administration’s defense budget requests add up to $150 billion more than the congressionally mandated limits. Any reduction in funding below the administration’s submissions will cause serious problems and make overall risks to current strategies unmanageable, he warned.

Work continued that President Barack Obama wants the limits removed, as does Congress. “[Sequestration capping] doesn’t makes sense,” he said, citing the general opinion in Washington. “Then undo it!”

He also addressed the technology advances made by potential adversaries that threaten the U.S. technology lead. Advanced countries such as Russia and China, as well as the smaller nations of Iran and North Korea, are pushing hard to eliminate that advantage. This would have severe ramifications for U.S. deterrence and cause allies to doubt U.S. commitments.

War could come from a number of different scenarios. A panel on the Indo-Asia Pacific region examined many potential combinations of conflict as well as cooperation. Panel moderator David M. Finkelstein, vice president and director, China Studies, Center for Naval Analyses, noted that the administration listed contested maritime territorial claims—mostly involving China—and a provocative North Korea as the two big threats to peace in the Asia-Pacific region.

Vice Adm. Doug Crowder, USN (Ret.), former commander, Seventh Fleet, said the larger issue is China’s claims, its building structures on disputed lands and use of intimidation “to pursue incredible claims.” And Finkelstein noted that the People’s Liberation Army Navy (PLAN) now is viewed by China’s leadership as being on the point end of the spear for projecting Chinese power.

Adm. Crowder was blunt about the role the United States must play if it is to be taken seriously in the Asia-Pacific region. If the United States is not transparent in dealing with China and does not stand up to it when necessary, then other nations will doubt U.S. resolve, he charged.

Rear Adm. Douglas McAneny, USN (Ret.), former commander, Submarine Force U.S. Pacific Fleet, said there is no doubt that, given the trajectory it is on, there is going to be a much more muscular China in the region. However, Adm. McAneny offered that the most fascinating country is North Korea. He had hoped the new leadership would be more worldly and willing to reach out to others, but instead it has become more bizarre. He worries about a nuclear North Korea.

For the sea services, the most international influence of all is cyber, which knows no geopolitical borders. Vice Adm. Jan Tighe, USN, commander, Fleet Cyber Command and commander, 10th Fleet, pointed out that the Navy no longer can focus only on peer nation-state military competitors in cyberspace. Criminals, hackers and other cybermarauders must be taken into account. Even if the attack is not destructive, it could be detrimental to national interests.

“The Sony hack demonstrated that cyber attacks on noncritical infrastructure still can take aim at traditional American values,” she declared.

The Navy is leveraging all-source intelligence to identify emerging threats, the admiral said. Her command layers sensors, analysts and hunters inside the network. Automatic intelligence, surveillance and reconnaissance is used to trigger responses in the network, or the network is maneuvered out of harm’s way when a threat is seen coming.

Gen. Joseph F. Dunford Jr., USMC, commandant of the Marine Corps, described cyber as both a challenge and an opportunity. The Corps is looking at how a Marine Air-Ground Task Force can leverage offensive cybercapabilities.

The U.S. Coast Guard is the only sea service located in the Department of Homeland Security, and cyber plays a large role in its operations. Adm. Paul F. Zukunft, USCG, commandant of the Coast Guard, described how a cyber attack on a U.S. seaport could wreak havoc on the U.S. economy. The port of Los Angeles/Long Beach has a cargo throughput of $1 billion each day, and like most ports its activities are automated. U.S. ports have asked the Coast Guard for cyberprotection, and the service is rolling out a cyberstrategy, Adm. Zukunft said.

The one military service that includes operational elements of all the others is the Marine Corps, and it is relying on networking to help it carry out new missions with fewer personnel. Maj. Gen. Lawrence D. Nicholson, USMC, commanding general, 1st Marine Division, explained that smaller groups of Marines will have more capabilities than larger units had just a few years ago. As a result, they will include experts, such as intelligence analysts, who would be able to perform advanced tasks because of greater network capabilities.

Vice Adm. Ted N. Branch, USN, deputy chief of naval operations for information dominance, N-2/N-6, and director of naval intelligence, told of how the Consolidated Afloat Networks and Enterprise Services (CANES) system is the Navy’s network to the tactical edge. He added that the Navy needs the tactical cloud with reachback as well as maritime tactical command and control for a fused operational picture that will give the commander vital decision aids.

One U.S. Navy admiral sees opportunity in the budget cuts. Rear Adm. David H. Lewis USN, commander, Space and Naval Warfare Systems Command, pointed out that each interwar period since World War I featured significant advances or breakthroughs in military technologies or doctrines—and each of these periods was characterized by virtually no money for defense systems. “This is our opportunity to really innovate,” he declared.

The Navy is looking at new defensive technologies to counter the increasingly sophisticated threats it faces. These technologies range from upgrades to existing capabilities to exotic systems that would change the nature of naval warfare, and Vice Adm. Thomas S. Rowden, USN, commander, Naval Surface Forces and Naval Surface Force, U.S. Pacific Fleet, said getting these new defensive technologies out to the ship will be a big help to the fleet.
“It’s about changing the rules of the game in the middle of the game,” he declared.

Longer-term advances such as lasers and railguns could have a significant effect on how battles are fought. “When the interceptor you’re using costs more than the missile being shot at you, you’re on the wrong side of the equation,” the Adm. Rowden said of the current situation facing the U.S. Navy. “We can’t get that laser, and the other weapons, out there fast enough.”

Adm. Gortney warned that the United States must look “horizontally” across the budget if it is to face a war. “We must have the industrial base and the intellectual base to build the capacity needed to fight that war,” he stated. The challenge facing the military in the next five years is to maintain current and future readiness while recapitalizing—“how we take a breath before we go to the next war,” he offered.

Gordon R. England, former secretary of the Navy and former deputy secretary of defense, said many factors keep the Defense Department from operating as a rational enterprise. For example, when he was at the department, there were 27 layers of authority from the secretary on down, and the department had 128 studies on how to improve acquisition.

Ellen Lord, president and CEO of Textron Systems Corporation, expanded on England’s description by noting the government has “oversight on top of oversight on top of oversight.” She noted that her company has as many as three times the auditors reviewing programs that it used to have. All the time spent attending to audits is time taken away from innovation, she pointed out.

Jerry DeMuro, president and CEO of BAE Systems, added that his firm has audits for 2005 and 2006 that haven’t been completed yet. Addressing England’s comment about Defense Department layers, DeMuro said, “It would be difficult to find someone who says these added layers are improving the product or getting it to the warfighters. It’s time and money we are not spending on innovation.”

Lord offered that companies serving the Defense Department should use commercial practices for providing systems to the military. They should look at the defense market and make smart bets on what the military would need, just as they do when bringing a product to the commercial marketplace.