The center will provide “foundational” space-related intelligence.
By Kimberly Underwood 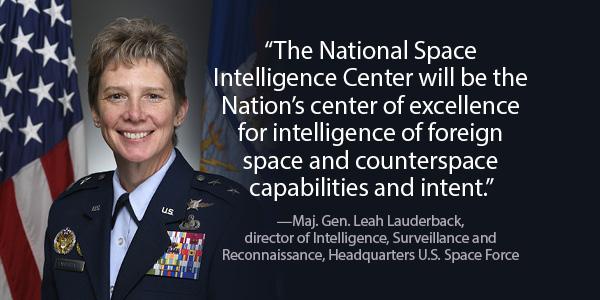 The U.S. Space Force is in the process of standing up the National Space Intelligence Center, or NSIC, with a goal of reaching initial operating capability, or IOC, by January 2022. NSIC will perform national and military space foundational missions and will evaluate capabilities, performance, limitations and vulnerabilities of space and counterspace systems and services, said Maj. Gen. Leah Lauderback, USAF, director, Intelligence Surveillance and Reconnaissance (ISR), U.S. Space Force.

Also known as the S-2, Gen. Lauderback has spent the last several months leading the effort. With guidance from the Space Force’s Chief of Space Operations, Gen. Jay Raymond, she formed a working group that has been meeting both internally within the service and externally in the intelligence community, or IC, to shape the center. Amongst other roles, NSIC will support the Space Force’s role across the IC.

“NSIC will be the nation’s center of excellence for intelligence of foreign space and counterspace capabilities and intent,” Gen. Lauderback explained in a statement to SIGNAL. “It will provide foundational intelligence in support of tactical-level through strategic-level intelligence problems.”

The center will continue to provide similar types of intelligence information and products that two organizations, the Space Analysis and the Counterspace Analysis Squadrons, currently supply. “As the center grows, we expect to expand those product offerings to meet the growing demand from the space community,” the S-2 said.

“As part of the greater IC, NSIC and the other parts of the U.S. Space Force ISR enterprise will be an integral member of a space intelligence community that is focused on understanding foreign space and counterspace capabilities,” Gen. Lauderback noted.

NSIC will be co-located with the existing National Air and Space Intelligence Center, or NASIC, at Wright-Patterson Air Force Base, Ohio. NASIC is the U.S. Air Force’s service intelligence center and an operational wing within the Air Force’s ISR enterprise that serves as the nation’s air and space intelligence center. As a field operating agency, NASIC reports directly to Lt. Gen. Mary O’Brien, USAF the deputy chief of staff for Intelligence, Surveillance, Reconnaissance, and Cyber Effects Operations at Air Force headquarters, also known as the AF A-2/6.

Gen. O’Brien and Gen. Lauderback have been working together to organize the Space Force’s ISR efforts as well as to form NSIC’s development in relation to the NASIC, since Gen. Lauderback transitioned to the Space Force from the Air Force’s Space Command at the beginning of the pandemic last year. “The continued close collaboration between the two organizations is critical to their respective long-term success,” Gen. Lauderback offered.

By next January, the Space Force expects NSIC to employ about 350 personnel, which will include the aforementioned squadrons along with associated leaders and support personnel. “This is likely to grow as NSIC moves toward FOC [full operating capability] in the future,” Gen. Lauderback shared. “Funding will transfer along with the two core squadrons from NASIC to NSIC. Initially, the majority of uniformed personnel will be Space Force Guardians. At the time of IOC, the Air Force personnel assigned to NSIC billets will remain in those billets until their normal rotation and will be replaced with Guardians at that time. Our civilian workforce are all Department of the Air Force civilians and will remain so.”

“Congressional appropriators need to authorize establishing a field operating agency in order for the future NSIC to report directly to the S-2 similar to the relationship the AF A-2/6 has with NASIC,” Gen. Lauderback specified.

NSIC and NASIC leaders still need to hammer out agreements that address the financial management of NSIC, how the center will conduct workforce hiring and development, and how it will maintain its facilities. These agreements will “ensure a methodical transition to NSIC stand up,” the general indicated.

In addition, the Office of the Director of National Intelligence (ODNI), now led by DNI Avril Haines, has to approve the transfer of national intelligence funding and billets from the Air Force to the Space Force. “The command and support billets need to be in place to lead and support the NSIC workforce,” Gen. Lauderback stated.

An ODNI spokesperson confirmed that the details of the transfer approval “are currently being worked out.”

In January, then-DNI John Ratcliffe approved the addition of the Space Force into the intelligence community, confirming it as the 18th member. The service is already performing space-related ISR, supplying key information and data to the IC, in addition to providing weekly intelligence reports to current DNI Haines. DNI Haines sees the service’s establishment of the NSIC “as one of the many vital partnerships Space Force will have with IC elements,” the ODNI spokesperson indicated.

As for how the NSIC might look five to 10 years out, the A-2/6, the S-2 and the working group are “currently exploring this and other questions associated” with NSIC’s IOC and FOC, the general said. The leaders are expected to report their conclusions to the Office of the Undersecretary of Defense for Intelligence and Security and to the ODNI by October. “In the next few years, I expect we will see NSIC grow to meet the expanding Space Intelligence demand from both the IC and DOD,” Gen. Lauderback said.

“The NSIC will be the nation’s premiere center of excellence for experience on the growing threats to our critical space infrastructure, which is vital to our economic and national security,” the ODNI spokesperson noted. 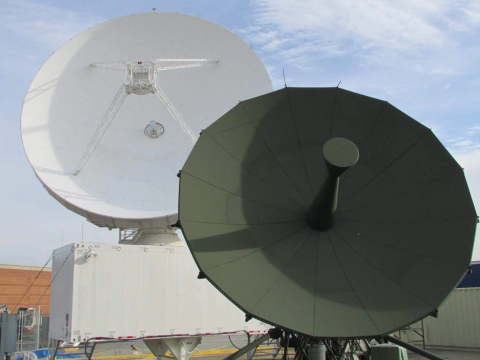