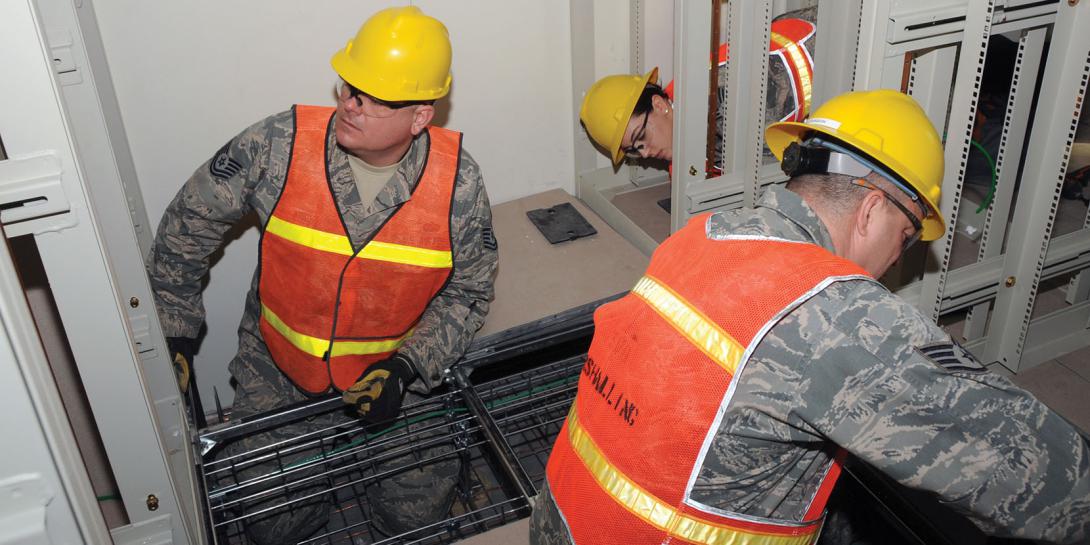 U.S. Strategic Command headquarters, the lynchpin for U.S. nuclear deterrence, is undergoing the technical renovations it requires to fulfill its current mission and facilitate growth for future operations. The new command and control facility under construction integrates the latest technologies and meets the growing demand to continue to evolve as needs emerge.

The Strategic Command (STRATCOM) lead office building at Offutt Air Force Base (AFB), Nebraska, has changed substantially since its commissioning in 1957. During the past 50 years, the command has taken on the nuclear deterrence mission; however, the facility was never designed to house the immense volume of information technology required to undertake the nuclear command and control (NC2) mission.

In 2009, STRATCOM leadership embarked on an ambitious project to construct a new C2 facility, or C2F, integrating the latest technologies to meet the challenges of an ever-changing, complex and dynamic world and to provide room for growth for future missions.

At a cost of $1.3 billion, the 916,000-square-foot facility megaproject will be second only to the Pentagon in its complexity of communications capabilities and infrastructure within the U.S. Defense Department.

Initially, STRATCOM considered hiring private contractors to install the more than 680 miles of network infrastructure required; however, project planners soon realized this would come at an enormous expense, and the initial contract award would take extensive time. Civilian contractors would require costly security escorts at all times and expenses would soar if round-the-clock or off-shift work was needed. And, as with many lengthy technology-heavy projects, any changes to the cable installation could result in considerable increases in contractor fees at taxpayers’ expense.

The command conservatively estimates this strategy will enable the Total Force EI team to save the command more than $250 million  by the time the project is complete.

STRATCOM and Air Force leadership adopted Aune’s plan in 2013, and work began with personnel from the EI as well as the Naval Space and Warfare Center collaborating to finalize the internal wiring design of the new facility. As a result of this teamwork, installation at Offutt started immediately after the first building spaces were ready in July 2015.

Once work is complete in October 2018, the building will have redundant, secure fiber and copper information technology systems supporting more than 3,500 users. This will enhance the nation’s strategic deterrence capabilities and provide a modern enterprise network that will assist with numerous other missions and tasks such as analysis and targeting as well as missile defense. STRATCOM also will be able to provide reliable retransmission capabilities to U.S. Air Force Global Strike Command and other strategic forces.

The EI staff reached out to units across the total force for assistance, including members from other ANG and Air Force Reserve units. Even personnel from other career fields such as transportation, construction and maintenance were tapped to meet the requirements. In addition to supporting worldwide contingency operations and different workloads, select personnel from 15 ANG EI squadrons, two ANG headquarters’ staffs and one active duty EI unit worked at Offutt for tours of up to six months.

Lt. Col. Sheree Patillo, USAF, is the project operations officer currently leading the airmen working on the effort. “The magnitude of this project in and of itself is mind-blowing, but to witness firsthand how our active duty, guard and reserve Air Force personnel are tirelessly tackling this effort alongside other Defense Department entities and industry contractors is simply indescribable,” she says.

STRATCOM leadership was so impressed with the EI team’s work on the inside plant cable infrastructure, the command requested EI support in several other areas. In addition to the premise wiring, the EI unit was asked to install the 1,800 communications racks and cabinets needed to house more than $474 million of electronics equipment critical for operating nuclear command, control and communications (NC3) and other networks across four levels of classification.

The unit also offered to install nearly 2,000 under-floor consolidation points, which allows cabling to extend from telecommunications closets out to the workspaces. Furthermore, the team accepted the massive challenge of connecting the new facility to the Defense Information Systems Network (DISN) by designing and installing the outside plant connectivity.

In partnership with the 55th Communications Group and its two squadrons, the team skillfully installed 15 fiber optic and copper cable projects with more than 37 miles of cable to establish connectivity to 14 mission-essential buildings on Offutt AFB.

As another opportunity to enlist military assistance, the 55th Communications Squadron’s cable and antenna maintenance team stepped up to conduct all the quality assurance oversight to outside plant cable work. The overall effort provides the facility with a diverse connectivity capability to the DISN through nearly 4,000 strands of fiber optic cable.

Construction delays are not uncommon for military construction projects of this magnitude. The original installation plan involved just-in-time deliveries of more than 1,800 racks and thousands of spools of cables. However, some of the facility spaces were not completed on schedule, so the team had to improvise.

Leveraging his relationships with Offutt’s 55th Wing, Aune secured 128,000 square feet of storage space in the Martin Bomber Building, a World War II bomber plant. Unfortunately, because the area had become a dumping ground for items Offutt organizations no longer used, EI personnel had to remove more than 23 short tons of furniture, trash and other materials. The hands-on effort saved the project more than $308,000 in labor and cleanup costs.

Upon completion of electrical installation work, the Army Corps of Engineers will turn the building over to STRATCOM, which will spend 18 to 20 months outfitting the building to take on the missions assigned to the command. STRATCOM is expected to vacate its current facility and move to the new building in late 2019.

According to Chief Master Sgt. Tim Day, USAF, ANG EI project manager, it’s not just STRATCOM that benefits from the partnerships developed during this project. “This has been a great opportunity to hone our wartime skills in an operational environment. We don’t normally get a chance for this type of collaboration outside the theater. The benefits to the EI community have been incredible as the skills the members receive here equate to many years of training for the traditional guardsmen.”

These projects also have enabled the EI team to gain firsthand experience with emerging technology outside plant infrastructure. One example is the work involved in installing air-blown fiber optic cable. In addition to allowing the installation of 14 cables rather than nine fiber optic cables within a single 4-inch conduit, the technology enabled teams to install 30,000-foot runs in less than two days. The method has proved so successful that the EI community is actively exploring a broader application in normal and contingency operations.

Steve Callicutt, former C2 facility program manager, who had served as STRATCOM’s senior executive in charge of the Resource and Capability Development Directorate, agrees the command has been living on borrowed time in the current headquarters building.

“Our EI Team is delivering capability to this combatant command that will last for the next 20 years, if not longer. However, it is people that make things happen, and the EI team demonstrates that fact daily with professionalism and pride in their craftsmanship. They are directly contributing to our number one mission–strategic deterrence,” Callicutt says.

Gen. John E. Hyten, USAF, commander, STRATCOM, addressed the leaders from all EI units at a February 2017 Offutt Air Force Base gathering. “Our project needed a solution to install IT [information technology] infrastructure, and you have stepped up to the plate. [Your] flexibility has been priceless in adapting to ever-changing construction issues. This is a great success story. We can construct the best building ever, but if we don’t have a solid IT backbone, the mission the president has given us can’t get done,” he stated.

In recent testimony before Congress, Gen. Hyten stated: “This new facility will serve as a visible reminder to adversaries of our national commitment to maintain modern and effective NC3 capabilities.”

The EI community and civilians from the PMO office have won STRATCOM quarterly awards in recognition of their numerous accomplishments. The integrated EI and PMO team also was selected to represent STRATCOM in competing for the 2017 General Mark A. Welsh III One Air Force Award, which recognizes endeavors that utilize at least two Air Force components to complete a project while taking advantage of each other’s capabilities.

Lt. Col. Christopher Treff, USAF, serves as the detachment commander of the 220th Engineering Installation Squadron, Ohio Air National Guard. With more than 10 years of EI experience, he was one of the principal engineers for the Air Force EI effort.