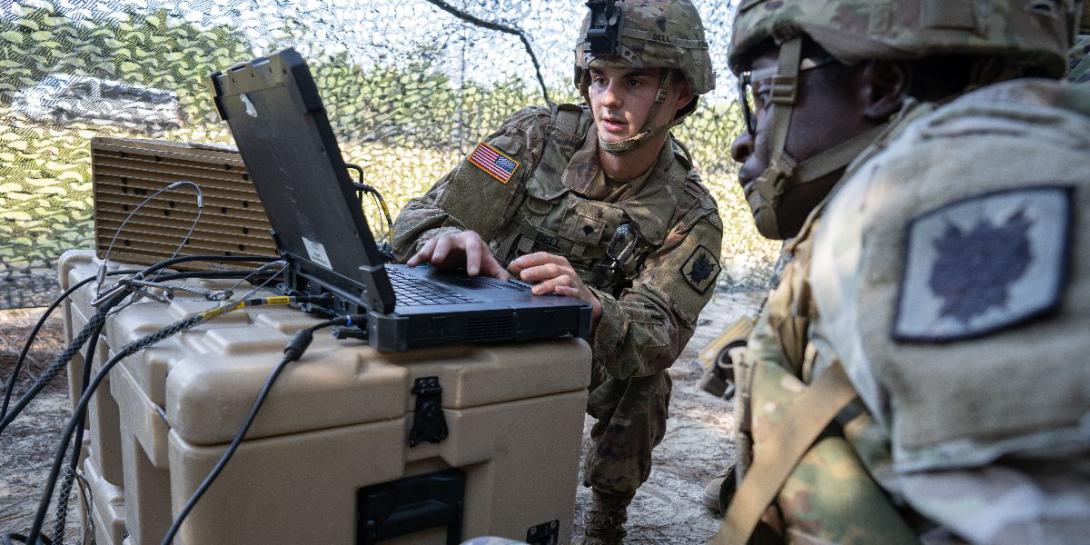 As Army senior leaders highlight key aspects of modernization, such as a “single pane of glass” for commanders to visualize the battlespace, a future operating environment where “data is the new ammunition,” and most recently, “data-centric” as the secretary of the Army’s second major objective to guide the force, they often point to another familiar term: convergence. The Army network, mission command systems and the data they produce and manage are critical to convergence, providing the communications foundation that links sensors to shooters and delivers commanders the information needed to make decisions.

In simple terms, the operational objective of convergence is to rapidly and continuously integrate, or converge, effects across all domains to overcome the adversary.

To drive convergence at the applications and data level, the segment of the Army modernization community focused on network and mission command is implementing convergence on several specific fronts. At a recent Convergence Summit, held in March at Aberdeen Proving Ground, Maryland, Army experts in requirements, acquisition, resourcing, science and technology (S&T) and other fields addressed progress in implementing and codifying convergence actions to date. They also outlined future priorities for hardware and software convergence to support the Army Unified Network Plan and Army Data Plan.

From a transport perspective, the Army is working to increase the integration and convergence of the tactical network with the strategic network to better link communications from the enterprise through the tactical edge. These include establishing a standards-based security architecture built on zero-trust principles; leveraging emerging technologies such as resilient commercial satellite communications and 5G and beyond wireless networks; accelerating movement of capabilities into cloud infrastructure; and further developing the Mission Partner Environment (MPE) that enables integrated communications with coalition partners. From a mission command perspective, the summit also reinforced how the Army is converging traditional stovepiped warfighting function systems and data management tools to enable collaborative command and control, increase situational awareness and drive decision dominance.

The Army’s network and mission command convergence initiatives are driven not only to enable multidomain operations and Joint All-Domain Command and Control (JADC2)—the joint service effort to connect sensors, shooters and command nodes to provide leaders with more information and the ability to act faster—but also to address feedback from the field.

Throughout interactions with the operational force, using feedback from Capability Set fielding, soldier touchpoints and operations overseas, leaders have highlighted the need to converge both applications and data. As the volume and velocity of tactical data increases, commanders today and in the future will need to quickly assess and evaluate greater amounts of data to establish a deep understanding of the operational environment and make informed decisions. To address this challenge, the Army is using the common operating environment (COE) to converge applications while working with the joint services to prioritize data sharing standards to support the sensor to shooter kill chain, as well as maturing a tactical data fabric for fielding beginning in Capability Set 23.

The primary computing environment under the COE is the Command Post Computing Environment (CPCE), which delivers a common operational picture (COP) for command posts in competition, crisis and conflict. The CPCE provides server hardware that hosts a comprehensive suite of software applications and services upon which warfighting functions can be converged and future applications can be built. By the end of fiscal year 2022, the Army will have migrated the tactical data infrastructure and will have initial integration and interoperability with air defense situational data, cyber, geospatial, tactical airspace and account provisioning, as well as joint fires applications, on the common CPCE framework.

The CPCE program is structured in formal two-year increments of development, test and fielding. In Increment 0, convergence efforts included migrating tactical data infrastructure and some of the chemical bio applications onto the tactical server infrastructure along with integrating air situational data and initial joint fires onto CPCE. CPCE Increment 1, which began fielding to soldiers in December 2021 following a full deployment decision, receives and processes data feeds from more than 25 other digital systems inside the command post, including those from joint and coalition partners. Based on soldier feedback from Increment 0, Increment 1 incorporates improvements across a wide range of applications, including new collaboration tools for whiteboard and mission planning. Increment 2, which will begin fielding in FY 2024, is currently undergoing technology maturation and risk reduction to mature the software and will integrate intelligence, sustainment and aviation capabilities.

This incremental strategy also uses developmental operations, commonly known as DevOps, to refine capability based on operational assessments for the program, lab- and field-based experimentation, and real-world employment. For example, when the 82nd Airborne Division deployed to Afghanistan last year to assist in evacuation operations, leaders experienced challenges in accessing, managing and sharing authoritative data—including logistics, operational and intelligence data—with mission partners. These lessons were reinforced after Russia invaded Ukraine in February 2022, and the Army’s Europe-based units that had been fielded through CPCE employed the capability to provide a COP and briefing tool for the theater level. The volume and diversity of data underscored the need for data fabric capabilities within CPCE to better manage and route information.

In between these real-world missions was the Army’s Project Convergence 21 exercise, held in October-November 2021, where CPCE provided the joint COP for the event by connecting to numerous experimental systems and technologies. The Army’s Project Convergence 21 observations also indicated a need for improved joint interface standards to better prioritize data convergence, which the Army is implementing with the Joint Staff J-6, and to integrate a data fabric in the CPCE environment.

Data fabric is a priority effort in support of convergence, bringing together multiple sources of data to enable sensor-to-shooter connectivity and better decision making on the battlefield. The term “data fabric” refers to technology that securely weaves together numerous information sources and data formats from different systems, providing a common layer to improve interoperability and quickly route the right data to the operator who needs it. Data fabric allows commanders to leverage data from multiple services, echelons and weapon systems platforms to choose the right effects.

Aligned with CPCE’s aim to provide a converged COP encompassing warfighting functions, a major focus of the Army’s tactical data fabric is to reduce digital barriers between functional systems such as fires, maneuver, air defense or sustainment, which can use different data types and formats. Data fabric works to discover and synchronize data from different sources, enrich it through common standards and quickly route the right data to the operator who needs it. Finally, a data fabric also aggregates and enhances the pool of data for artificial intelligence and machine learning capabilities to aid in decision making.

For Capability Set 23, CPCE will build a tactical data fabric foundation, improving the Army’s ability to ingress, egress, persist, secure and synchronize data in the tactical space. This includes initial data ingress of nonstandard formats such as text, chat and enterprise proprietary data formats. In Capability Set 25, the tactical data fabric will enable unlimited data ingress capability for new or nonstandard data sources, fully connect the enterprise and tactical environments and add advanced analytics, including artificial intelligence and machine learning. Future capability drops and increments will continue to evolve as technology advances over time, informed by warfighter feedback and experimentation. For example, the Army will build on the progress from Project Convergence 21 to demonstrate an improved data fabric capability at Project Convergence 22 this fall.

Although it is being fielded as part of CPCE, the Army’s tactical data fabric solution will also be extensible to the other computing environments within the COE. Army data fabric will federate, or connect, with data fabric solutions across the Navy, Air Force, Marine Corps and other joint force elements to support further interoperability and convergence.

In addition to the operational advantages of accessing, managing and sharing the right data to enable decision dominance, convergence provides benefits in training, acquisition and sustainment. As mission command capabilities are converged onto a common environment, adopting a similar look and feel and leveraging a common user interface, warfighters will require less time in training. Shared hardware resources across numerous applications will reduce costs for sustaining the hardware footprint. The cost and effort required to develop and integrate existing and new capabilities will also be reduced due to standardization of the development environment, which facilitates third-party development.

As the Army modernizes to deliver a survivable, secure, end-to-end network, convergence will ensure data is reachable, understandable and secured. The CPCE and data fabric illustrate how the Army is driving mission command technology development to support convergence. The incremental approach the Army is using in both areas—informed by operational feedback, experimentation and strategic guidance—enables adjustment to emerging technologies and threats.

Col. Matt Paul, USA, is the Army project manager, Mission Command, assigned to the Program Executive Office Command, Control, Communications-Tactical. He holds an M.S. in management from Austin Peay State University and a B.A. in law from Rowan University.

Col. Evert Hawk, USA, is the Line of Effort 2/3/4 team lead at the Network Cross-Functional Team. He holds a Master of Strategic Studies from the United States Army War College, an MBA in finance from Saint Joseph’s University and a B.S. in business administration and finance from Penn State University.

Col. Paul Staeheli, USA, is the director, Army Capability Manager-Mission Command/Command Post. He holds a Master of Strategic Studies from the United States Army War College, an M.S. in defense analysis terrorist operations and financing from the Naval Postgraduate School and a B.S. in biology from the University of Portland.