The Pentagon has received requests to use COLTs in the field.
By George I. Seffers 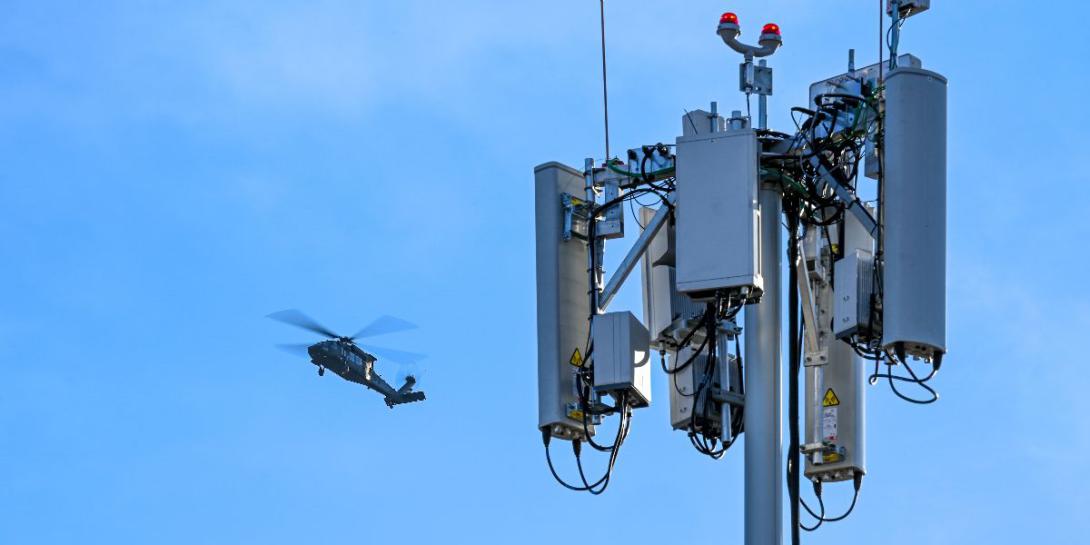 An UH-60 Blackhawk flies multiple passes at different altitudes over the runway during a series of 5G avionics tests March 2, 2022, at Hill Air Force Base, Utah. A 5G mobile test station was used during the testing as part of demonstration to implement 5G technologies without compromising the safety of military and civilian aircraft. U.S. Air Force photo by Cynthia Griggs

Trucks used to experiment with next-generation mobile communications technologies could deploy for operations after being ruggedized, according to Amanda Toman, the acting principal director for the Pentagon’s 5G to Future Generation Initiative.

The Defense Department uses the Cell on Light Trucks (COLTs) to test a variety of fifth-generation (5G) mobile communications capabilities. They also proved useful in September for providing communications for Operation Allies Welcome, an effort by the Homeland Security Department to help vulnerable Afghans—including those who worked with U.S. forces during combat operations—to resettle in the United States. Additionally, the trucks were used to test whether military and commercial aircraft radar altimeters are vulnerable to interference from 5G cellular technologies.

Asked whether the trucks could be used for military operations, Toman suggests it’s possible. “I would hope so. We definitely get requests for that, so it’s probably in the very near future,” she says.

She added, however, that the trucks would first need to be enhanced to meet military specifications. “There probably will be ruggedization required. They are commercial [Ford] F-550s that are retrofitted, so some degree of milspecing will probably be required for us to fully deploy them into austere environments.”

Prototypical COLTs were initially purchased to “facilitate testing and experimentation for some of our early seedling investments,” Toman explains, adding, “The utility of these COLTs has really been something unique that we’ve been able to demonstrate.”

That utility was proven during the Operation Allies Welcome deployment. “We had assets in Texas, and we drove them to different U.S. bases to assist with the processing of the refugees.

It really provided the capability to the personnel on the ground to have the communications they required to get all the processing done. I think it was more than 10,000 refugees processed across multiple U.S. locations.”

Operation Allies Welcome began in late August when President Joe Biden directed the Homeland Security Department to lead and coordinate efforts across the government to support refugees from Afghanistan.

The operational tests flew rotary and fixed-wing aircraft in critical phases of flight profiles to determine what the 5G avionics gold standard bench test should be as well as the impact of C-band 5G on aircraft equipment.

“To verify there either is or is not interference, we provided one of our COLTs to the Air Force to incorporate in their testing against commercial and military aircraft,” Toman says, indicating that it was important to “quickly pivot and leverage the asset for the COLT to radiate at the specific C-band frequency that was in question and verify how that frequency interacted with a variety of radar altimeters on a commercial and military aircraft.”

The Defense Department is purchasing COLTs through a potential $32 million contract awarded in November by Johns Hopkins University Applied Physics Laboratory to Oceus Networks and Ericsson. The initial delivery order includes seven COLTs configured to test a variety of 5G use cases, according to an Oceus press release. Each COLT is designed to test the various bands of spectrum from FR1 to FR2 frequency ranges.

The trucks include Ericsson’s 5G Core cloud-native software enabling standalone 5G, along with 5G New Radio hardware and software, which fulfill mission-critical grade service requirements. Each system will have specified frequency bands to test the full spectrum in 5G implementations, the release adds.

The trucks are one part of a comprehensive effort by the Office of the Under Secretary of Defense led by Heidi Shyu to experiment with 5G capabilities. The Defense Department is developing testbeds at a total of 12 sites. The Pentagon’s primary 5G goals include developing technology, evaluating vulnerabilities, influencing national and international standards and engaging with international partners and allies. The initiative includes 16 experimental projects and more than 100 vendors.

The experiments already are proving the benefits of 5G technologies for a wide range of military uses. “We are seeing improvements in things like reductions in latency, enhanced bandwidth and the ability to support a variety of sensors. That’s really good news that we’re seeing that aligned with our hypothesis,” Toman reports.

The department publicized the sites and experimental projects in three announcements. The first four sites, described as the first “tranche,” were announced in 2019. It includes Joint Base Lewis–McChord, Washington; Hill Air Force Base, Utah; Naval Base San Diego; and Marine Corps Logistics Base Albany, Georgia. In May of 2020, the department added Nellis Air Force Base, Nevada, to the first tranche, which Toman refers to as “tranche 1.5.”

Tranche 1 and 1.5 experiments are moving into the second phase of research and development and are “starting to look at implementation of the applications on those testbeds,” Toman reports. The second tranche, meanwhile, is still setting up the testbeds.

The Department of Defense (DoD) believes that 5G holds great promise for national security and defense, Toman says. “It’s not just because of the promise that you read about or hear about in commercials. It does have incredible speed and massive throughput and low latency, but DoD’s really excited about the game-changing networking and architectural flexibility that 5G opens up.”

She specifically cites the benefits of open radio access network (O-RAN) capabilities, which Ericsson describes on its website as “the industry’s generic term for an open radio network architecture” that “refers to the version of open RAN standardized by the O-RAN alliance.”

Toman touts O-RAN’s versatility. “It has the potential to really provide some unique architectural flexibility to the 5G system and really allowing for more sophistication in things like security and spectrum sharing and management. Trying to understand how we can leverage that is going to be a key part in the initiative.”

Other next-generation technologies that will make a difference for warfighters include augmented reality and virtual reality, dynamic spectrum sharing and distributed sensing. “Five G really has opened up the ability for the department to leverage these capabilities, so being able to leverage the electromagnetic space—things like dynamic spectrum sharing, distributed sensing, really are going to be valuable to the department,” Toman says.

The 5G testbed being built at Joint Base Lewis-McChord is designed to experiment with virtual and augmented reality for mission planning, distributed training and operational use. GBL System Corporation, AT&T, Oceus and Booz Allen Hamilton are participating in that effort.

Toman suggests that in the future a virtual medical professional could stand “on the shoulder of a soldier in the field to understand how to triage and treat a patient,” which she says would be one of many valuable uses for the technology.

She also stresses the potential benefits of cloud computing at the tactical edge, which would allow data processing as close as possible to the frontlines and “enhance a soldier’s ability to process at the edge and get real-time, actionable information.”

“The spectrum sharing piece and the coexistence is going to be real important as we move to the future. Specifically for Hill Air Force Base, we’re looking at spectrum sharing between a high-powered airborne radar asset with 5G, so that is a scenario to understand how 5G can coexist with that other emitter,” Toman reports, declining to name the airborne radar asset. “But being able to apply those lessons learned beyond just that one airborne asset will be huge to the warfighter and to the department in the future,” she adds.

Additionally, Internet of Things technologies will allow the department to “pull together different sensors, leveraging 5G capability to do that,” and obviously be valuable, she says.