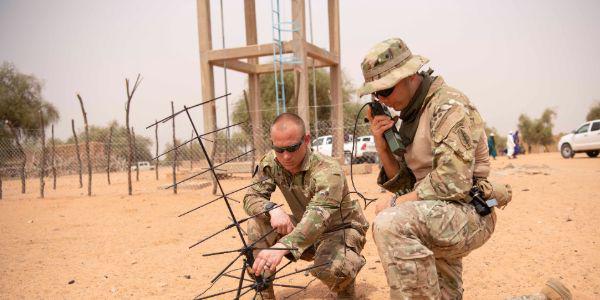 During large-scale combat operations and operations in austere environments, the modern warfighter must remain light and agile and enjoy ease of communication with both higher and lower echelons. These requirements highlight the necessity for and relevance of devices such as the Global Rapid Response Information Package.

In 2018, Gen. Stephen J. Townsend, USA, advocated for lighter, faster and smaller equipment across the Army. He specifically spoke of command and control (C2) systems at the AFCEA Army Signal Conference that same year, stating, “The Army’s network has to reach a level of user effectiveness like that achieved by today’s smartphone.” Three years later, evidence of demonstrable progress at the tactical level is scant, and there is even risk of regression.

Recently, support has waned for the Global Rapid Response Information Package (GRRIP) program. Units were notified by higher echelons that the retention of these systems would require the expenditure of unit funds and that the aggregation site for GRRIPs’ connections, the Satellite Communications Operations Center, may face degradations in its ability to pass GRRIP traffic into the Department of Defense Information Network (DODIN). This comes just as the 2nd Brigade Combat Team, 101st Airborne Division (Air Assault), utilized the GRRIP to great effect during Joint Readiness Training Center Rotation 20-09, with battalion tactical operations centers electing to operate solely off cellular capabilities for upper tactical Internet rather than staying mired in the logistical and technical complications inherent with their primary communications assemblages. These challenges were only exacerbated during this first COVID-era brigade combat team rotation where manning across all the necessary Signal disciplines was scarce, and sufficient cross-training on routing, switching, servers and satellite transmission was impractical during an extended moratorium on collective training.

The Army continues to equip its conventional forces with unnecessarily cumbersome, slow-operating communications systems, which can be replaced with smaller, lighter and easier-to-operate equipment that costs less. For over five years, brigade combat teams used the GRRIP and Secret Internet Protocol Router (SIPR)/ Nonsecure Internet Protocol Router Access Point terminals as a bridging capability until Transportable Tactical Command Communications (T2C2) could be fielded, ostensibly an upgrade in an analogous capability. However, these systems are vastly dissimilar. T2C2 is satellite-based and weighs more than 300 pounds, while the GRRIPs’ key capability is in cellular communications and weighs around 30 pounds. Given this disparity and the demonstrated advantages of the GRRIP, arguably the Army needs to taper its heavy reliance on satellite communications systems and take steps to adopt cellular-based on-the-go systems for battalion-sized formations and lower.

Generally, units transport signal with the GRRIP in one of two ways. The first is with the Broadband Global Area Network antenna. This is a satellite antenna that transmits 400kbps bandwidth, which is a tenable setup when used to send an email or a photograph or to post a document to a portal. But it is less desirable when there are multiple users, high graphics throughput or when in-motion use is required. The other preferred mode of transport is with the Mobile Broadband Kit. It uses a component called “CradlePoint” to transmit and receive 3G/4G signals, usually to and from a commercial cellphone tower. With private cellphone use, if there is a fair signal, full-motion video, voice and photograph transmissions are fast and reliable—certainly more so than what the average user in the field environment experiences.

When the user sends data, it is packaged and encrypted at the GRRIP baseband then converted to a cellular signal by the Mobile Broadband Kit. The signal is sent to a cell tower, which then travels through terrestrial links to the Navy Operational Support Center in Fort Dix, New Jersey. From there, it is pushed to one of the regional hub nodes and into the DODIN, where it can go to another tactical node, a user on a Global Agile Integrated Transport connection, or even a garrison/Network Enterprise Center SIPR laptop. This usually happens within 100 milliseconds of latency (or less), which is several orders of magnitude faster than when using the baseline assemblages at the brigade combat teams.

Moreover, as most experience with personal cellular devices, this technology works well during movement, without needing pristine line-of-sight to the antenna. Current baseline assemblages at the brigade combat team struggle here, especially while in motion because they are largely satellite-dependent. Some can auto-acquire quickly after vehicle movement has ceased, and that is commendable, but we have not seen them used successfully while in motion unless on flat surfaces and at slow speeds. The majority also use a waveform that operates on a shared mesh that becomes severely degraded when all nodes in the brigade combat team are operational. When multiple teams are training or validating simultaneously, it becomes unusable.

In operational environments, 3G and 4G are already in use. SIM cards that will function across the globe are available in the 101st Airborne Division. However, in some host nations with poor infrastructure, the cost conversion can be exorbitant. Fortunately, for stateside training budget purposes, the cost is approximately $10 per gigabyte. That means for $1,000, enough video can pass through a GRRIP to fill 21 DVDs. Given that tactical operation centers and commanders on the move send mostly emails, Command Post of the Future graphics and text-based messages, a $1,000 SIM card can have significant longevity. Several SIM cards have lasted the 2nd Brigade Combat Team for 15 months and counting, to include a Joint Readiness Training Center rotation.

The issue lies in considering the wars of tomorrow and where we expect to operate in a contested battlespace. In a near-peer adversarial scenario, we would be unlikely to have even degraded line-of-site with a trusted cellular provider, but that is not as restrictive as it seems. Expeditionary private cellular networks have been in use for years. In case of a natural disaster, the Federal Emergency Management Agency (FEMA) routinely installs its own private cellular network to facilitate the use of this highly advantageous technology. Forward airfield and Special Operations Forces consistently utilize similar setups.

One difficulty is that a brigade combat team, in undulating or densely forested terrain, would likely need a 100-foot-plus tower to communicate effectively, making the transmission site an easy target for the enemy and the equipment inconvenient for rapid advances through the battlespace. However, this limitation has already been mitigated in various forms, including attaching cellular payloads to manned and unmanned aircraft and telescoping masts mounted on trailers.

At this point, some assets would likely have to be managed at the division level. This can be considered an improvement to the status quo, given that satellite access is managed at the U.S. Army Forces Command level and beyond. In the case of a private cellular network with a “bubble” the size of a training area, it is conceivable that the management thereof could be flattened to the local installation echelons, assuming standing agreements between the Federal Communications Commission and relevant commercial providers were in place. Going further, susceptibility to jamming and other electronic countermeasures must be accounted for as in all other radio spectrum use cases.

Overall, the point is not to diminish the importance of satellite-based upper tactical Internetworks. They will remain vital for strategic communications. In fact, adding another pathway such as cellular could go a long way in decreasing the burden on precious satellite spectrum resources. These resources will become increasingly important when leveraging cloud computing and machine learning, which will be fed by a massive amount of data from military Internet of Things sensors. Robust satellite bandwidth will be critical in passing this data over the horizon to be analyzed by strategic planners and decision makers augmented with advanced algorithmic systems.

Some may argue against programs of record like GRRIP with Mobile Broadband Kits because they rely on a commercial backbone. This line of thinking does not take into account all available resources and is likely to be proven short-sighted in terms of preparing for multidomain operations, large-scale combat operations and the modern tactical network they will require.

While reliability is paramount for any soldier’s communications, the ease of use and access to this equipment is almost of equal importance. Airborne and air assault units prefer to have the ability to enter environments with their equipment on their person, something that can be easily accomplished with something like a GRRIP system because it is only 28 pounds and is contained within one to two cases. With three to five users running off of one GRRIP, assuming there is a battalion headquarters deployed with three GRRIPs, there would be more than enough bandwidth to operate a tactical operations center in an austere environment. Some commanders may require less. The initial cost for an individual GRRIP could reach as high as $70,000, with maintenance costs near $5,000 a year. However, considering that a system like the T2C2 costs $350,000-530,000, the GRRIP accomplishes a lot for a fraction of the cost.

During large-scale combat operations and operations in austere environments, it will be imperative for modern warfighters to remain light and agile. And they will need to remain in communication with both higher and lower echelons. With this in mind, the GRRIP dwarfs the bandwidth of other baseline assemblages while also being physically light and easy to use. Satellite communications have a role in combat, but to remove cellular communications from a brigade’s network is a degradation in capabilities for current and future use. Undoubtedly, spectrum management and electronic warfare challenges will have to be overcome. As is the case with all current transmission sources, the necessity, affordability and ease for devices like GRRIPs remain relevant in large-scale combat operations even if it doesn’t completely replace the signal infrastructure.

Capt. Chance Foley, USA, is currently the information systems engineer for the 2nd Brigade Combat Team of the 101st Airborne Division. He has previously served with the 75th Ranger Regiment, 3rd Special Forces Group, and 112th Signal Battalion and holds the CISSP, CISM, CCNA, Security +, and Network + certifications. For his next assignment he will be attending graduate school at the University of North Carolina Chapel Hill.

Maj. Alison Wallace, USA, has served in the 82nd Airborne Division, 25th Infantry Division and 101st Airborne Division, and has instructed at the United States Military Academy. She has graduate degrees in homeland security with a concentration in information forensics from Pennsylvania State University, and in literature from the University of Edinburgh. Her next assignment is with the 52nd Signal Battalion in Stuttgart, Germany.