Future Armies Will March on Their Batteries

Soldiers may get a charge out of water-based power sources.
By Robert K. Ackerman 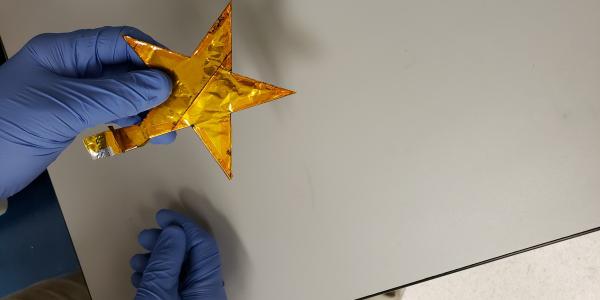 A scientist at the Army Research Laboratory (ARL) holds a demonstration battery built in the shape of an Army star. This new battery technology, constructed with a water-based electrolyte, is lightweight, flexible and safe from explosive reactions, making it more suitable for battlefield applications than conventional batteries. Army Research Laboratory photo

The proliferation of soldier electronic devices may be powered by a new generation of batteries based on substances as exotic as water. Other technologies are part of the mix as scientists strive to eliminate the need for individual soldiers to carry power-supply bricks in their kit.

The new power sources may take the form of conformal constructs that are shaped to fit on a soldier’s body. Even vest straps could be power sources that support a host of different electronics technologies essential to infantry operations.

This effort to tap innovative power sources is part of the Army Research Laboratory’s (ARL’s) basic and applied research program in energy storage. Cynthia Lundgren, Electrochemistry Branch chief at the Combat Capabilities Development Command (CCDC) at the ARL, notes that commercial batteries cannot fill the bill because military batteries must operate in a greater temperature range, have high power and long energy density, and be safe in a ballistic environment. While conventional lithium-ion batteries represent state-of-the-art commercial power sources, they are not safe in a ballistic environment, she points out. The military needs all of those capabilities to provide effective power sources to its soldiers.

The ARL’s program focuses on challenges such as operating temperature range and safety, she continues. Playing a key role in both criteria are electrolytes, which is where the lab focuses most of its research. The ARL collaborates with many other organizations, particularly the Center for Research in Extreme Batteries, or CREB, at the University of Maryland. She notes that this center focuses on batteries in extreme applications or environments, so the ARL finds CREB an appropriate partner for the extreme applications typical of defense.

This collaboration has led to the development of an electrolyte that is water-based. Describing this as remarkable, Lundgren explains that water’s voltage window is limited to about 1.5 volts, which does not ordinarily lead to powerful batteries. But several years of ARL battery research have led to an electrolyte design that generates the properties needed. “This is a fairly new advancement,” she says.

This water-based battery, known as an aqueous battery, originally could generate about 2.4 volts. That limit has been extended to beyond 4 volts, she reports. A rapid reaction technology office program with several collaborators aims to develop a flexible, conformable, non-flammable battery. “We hope it can change the way we power the soldier because we can make it flexible and conformal,” Lundgren says. “We’re not limited to a brick sitting on the side or in front of the soldier.” She adds that with time, researchers might be able to make the battery multifunctional or even dual-purpose as a vest that provides power.

The water-based electrolyte avoids the problems of explosion-prone batteries. When conventional high-power batteries overcharge or short out, their electrodes release oxygen radicals that react with the sensitive flammable solvent in the electrolyte, causing a fire, Lundgren explains. But the aqueous battery’s electrolyte will not react with an oxygen radical, so no fire will occur.

This electrolyte has a high salt concentration, she continues, and its conductivity is high. The 3-volt version can be recharged thousands of times rapidly, although the energy density is limited. Some 4-volt versions, which also have high conductivity, can work at minus 80 degrees Celsius. Their number of recharge cycles is limited to about 200, but researchers are making significant progress in their work to extend that number, Lundgren reports.

So far, scientists have built single cells. Their goal is to construct battery packs, but that achievement lies ahead. Being able to build packs is necessary to attain the performance needed on the battlefield. The Army is looking at eventually using 3-D printing to manufacture these batteries for production, Lundgren suggests.

Another challenge is cost. These constructs are expensive, Lundgren allows. To make their use a reality, researchers must bring their cost down considerably. One way might be to use the economies of scale in fabrication. Lithium-ion batteries require substantial investment in manufacturing facilities, which must include expensive dry rooms with tightly controlled humidity. Aqueous batteries have no such requirements, nor do they need the hermetically-sealed ruggedized packaging mandated for lithium-ion batteries. “These [aqueous] batteries are actually very abuse-tolerant,” she says. “We’ve actually cut them, and they still operate. We’ve cut them and put them in salt water, and they still operate.”

Size and weight are not an issue, as they are comparable to existing batteries. What sets these apart logistically is that they are conformal, Lundgren says. They can be constructed in virtually any shape, which should allow less packaging and thus weigh less. The main issue is comfort, as the battery unit needs to be flexible, she says. It might be configured as straps on the soldier’s vest, so it could provide power anywhere.

Recently, one configuration placed it on the chest plate armor on the soldier’s vest. That didn’t work well, Lundgren relates, so it was placed in the soldier’s backpack, but changing it out from there requires assistance from another soldier. The latest consideration is to place it to the side of the armor plate, she says.

“One of the great advantages of the aqueous battery is that it doesn’t need a lot of packaging, it’s really very abuse tolerant—it only needs some Kevlar-like cloth on it,” Lundgren offers.

As envisioned now, aqueous batteries largely would provide soldier power, she offers. Yet ultimately they could be scaled up. This could happen as the technology progresses. “Whether it ever goes into a vehicle will really depend on the price point,” she adds.

ARL scientists are aiming to have a version ready for deployment by 2026, Lundgren says. This would take the shape of a conformable, wearable battery that would power several different systems or charge peripheral system batteries. “It would be a central power source,” Lundgren states.

Lundgren notes that several other technologies also will avoid the fire hazard, and researchers are exploring those. Solid-state electrolytes lack solvents, and the ARL is exploring their potential. Ionic liquids also are not flammable, and the ARL is researching their capabilities with partners.

Work with an industrial partner has led to a high-voltage electrolyte, Lundgren reports. Another partner has produced a silicon anode and a high-voltage cathode that can form the basis of a high energy density battery. She notes that some of the conventional chemistries that would constitute this type battery would not be safe in the ballistic environment characteristic of a battlefield. Yet this approach would be safe, she says.

The ARL is building an 1800-square-foot dry room, which Lundgren describes as critical to many of the technologies being developed. A spinoff company coming out of the University of Maryland and CREB is looking to use some of the ARL facilities to develop solid-state lithium-ion or –metal batteries in collaboration with the lab, and this could lead to the sought-after solid-state electrolyte for soldier power needs.

Even amid the battery research, ARL scientists are exploring fuel cells as potential portable power sources. Fuel cells represent a fairly mature technology that is commercially available, Lundgren says. Hydrogen is the basic fuel for them, but the Army would like its fuel cells to run on JP-8, the conventional jet fuel. However, no such fuel cells yet exist at the size and weight that would make them practical for the Army. Research into programs to generate fuels for effective fuel cells continues.

One Army program uses Alane for wearable soldier power fuel cells. Its production is a Title 3 program, but the price is still an issue. This solid material would be used in cartridges in relatively low-power devices.