And that trust must be built around information sharing.
By Robert K. Ackerman 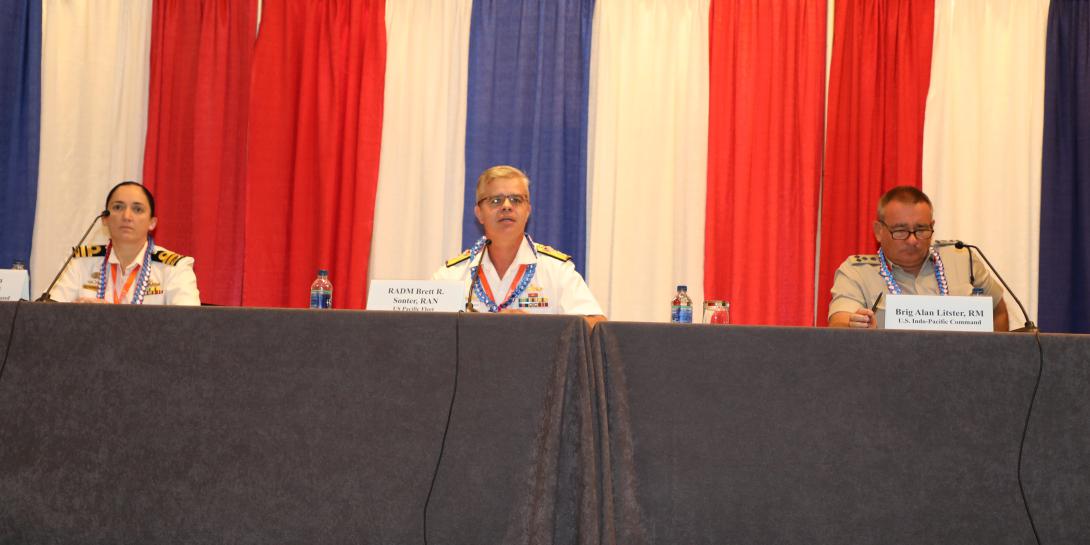 The United States is building partnerships and alliances throughout the Indo-Pacific region, and trust issues are the thorniest hurdle to overcome. Officials in many countries work with the United States to iron out technological incompatibilities, and some countries actually purchase U.S. communications and information systems to ensure a degree of interoperability. But with information increasingly the currency of battlefield success, information sharing based on trust may hold the key to successful coalition operations.

Those were the findings expressed by a panel of foreign military officers on the third and final day of TechNet Indo-Pacific, held in Honolulu April 11-13. Officers from Australia and the United Kingdom, all with experience in U.S. combatant commands, credited the United States with improved efforts but noted that further steps need to be taken.

“Your country has come in leaps and bounds in information sharing,” stated Rear Adm. Brett R. Sonter, RAN, deputy director, Maritime Operations-Australia, U.S. Pacific Fleet. “The stuff I get to look at now, I would not have believed I would have had the opportunity mere years ago.”

He continued that, if he were a teacher marking a report card, he would grade the countries’ interoperability a five out of 10. “We’ve done a lot that we’ve needed to do, but we need to do more,” he offered.

Greater trust in information sharing often comes down to a matter of risk, Adm. Sonter continued. “Sometimes we are a bit risk adverse in sharing of information. We need to become risk aware,” he stated. “Share more, understand your partners’ capabilities in cyberspace. The only way we’re going to get ahead in cyberspace is through sharing.

“We no longer have the benefit of time to do strategic challenges.”

Brig. Gen. Alan Lister, RM, J-5 deputy director for policy, U.S. Indo-Pacific Command (INDOPACOM), discussed the concept of interchangeability vs. interoperability. Interchangeability means you can count on an ally somewhere else to do what needs to be done, he offered. Interoperability is harder to achieve.

“The value of allies and partners actually transcends the power of interoperability,” he stated, adding, “It’s something that our peer competitor does not enjoy in the region.”

Adm. Sonter lauded U.S. efforts to build coalitions throughout the region. “Our collective strength in the challenges we face now is allies and partners,” he stated. “Others do not have the same strength you [the U.S.] have.”

Gen. Lister pointed out the difference between the Indo-Pacific region and Europe, where security is built around NATO. In the Indo-Pacific, there is “no NATO, no sharing agreements, no STANAGs [standardization agreements]. In terms of information sharing, much of what we do is in bilateral agreements. But that doesn’t mean you can’t share information,” he emphasized.

What the United States can do is provide access to technology, allowing nations to share information among themselves.—Brig. Alan Lister, RM, J5 deputy director for policy, @INDOPACOM #AFCEATechNet

“What the United States can do is provide access to technology, allowing nations to share information among themselves,” he offered.