The explosion of online social media is profoundly changing how people produce, consume and share information. Social media rapidly turns monologues into dialogues and broadcasts into conversations. The result is a rich environment in which ideas are shared, questions are answered and collaborative relationships flourish.
By Maj. Daniel Ward, USAF, Maj. Gabe Mounce, USAF, and Carol Scheina

A social media manifesto can lead the way.

The explosion of online social media is profoundly changing how people produce, consume and share information. Social media rapidly turns monologues into dialogues and broadcasts into conversations. The result is a rich environment in which ideas are shared, questions are answered and collaborative relationships flourish.

But here is the problem: The Defense Department currently denies access to social media sites from many unclassified department networks. This misguided decision isolates the defense work force from one of the biggest engines of social, economic and technological change in the world today. This policy must change.

This is a critical issue, particularly for military technologists who envision, develop, produce and evaluate new technologies. Blocking access to social media restricts the warfighters’ ability to collaborate and innovate. It limits their ability to take their mission—defense of this nation—to new and better levels.

Social media allows people to share their insights, experiences and questions with a diverse community, regardless of distance in time or space, and regardless of organizational boundaries. Social media communities are self-selected and interest-driven. They are not limited to those who wear the same uniform, work on the same projects or have the same background and training. Social media extends beyond the military-industrial complex.

With social media, a team is no longer a small group of people physically located at “Base A.” It is not even a group of people assigned to the project. It easily can include a retired mentor, a college professor, a forward-deployed warfighter, a college student, an industry member, a former co-worker, a Defense Department team working on a related project and a half dozen people from small companies who have never worked with the department before. It might even include people from other countries.

And those people can be pulled into the team without extensive searches for the “right people,” and without having to physically move people into the “right place.” They can work together faster and better than ever before.

Social-media-savvy workers are fiercely collaborative. Anything that helps them discover and connect with potential co-workers, theorists, innovators and others—no matter where they are located—is something they are deeply interested in.

The network security argument is weak, largely because the blocked sites do not represent a unique threat. LinkedIn, which typically is not blocked, presents just as much of a threat as Facebook. The two networking Web sites have similar capabilities. More to the point, blocking social media in an attempt to prevent exploitation of network vulnerabilities is a self-induced denial-of-service attack. Network security, by definition, involves ensuring the network can operate without being penetrated by hostile parties. Preventing intrusion by blocking legitimate users misses the point, and a system that is more secure than it is useful is useless.

As for vulnerabilities to social engineering attacks, many Defense Department employees already are using social media at home, where the bad guys could easily come after them. An unclassified computer on an unclassified network is no different.

The bandwidth argument makes sense for some video-sharing sites such as YouTube, but Twitter is hardly a bandwidth hog. And really, is bandwidth such a rare and precious commodity? If so, the department should consider mandating smaller PowerPoint files.

The worst reason to block social media sites is the “We don’t want people to waste time” excuse. People wasting time during the day is a leadership issue, and it requires a leadership solution. Blocking “extracurricular” Web sites is not leadership. Good leaders are in touch with their people, and they should know if someone is not completing the mission. On the topic of limiting computer use to official tasks, it is worth noting that ESPN.com generally is not blocked, but the Defense Department often blocks its own TroopTube site.

There are information assurance risks associated with permitting defense networks to access social media, and many sites use large amounts of bandwidth; however, the department risks locking itself into legacy processes right at the start of the social media revolution. Indeed, the risks inherent in using social media sites are more tolerable than the mission impact of not using them.

The Defense Department can help ensure network security and prevent social engineering attacks by implementing wise policies written by people who understand the value of social media. It can offer brief, clear usage principles, and then it can trust the work force to do the right thing. Make no mistake—a zero-usage policy is not wise and does not support the mission. The department must find ways to work with social media. It cannot afford to just block it.

The Defense Department’s limited embrace of social media tools as recruiting and advertising tools reflects a lack of understanding as to what social media can do. For example, the Air Force Knowledge Now’s Communities of Practice most often is used as a glorified file-sharing server, not a place for dynamic discovery and interaction. The same goes for local MySpace Web pages and internal blogging capabilities. These approaches are insufficient, watered-down, insular facsimiles of social media.

Such approaches limit the defense community’s exposure to new ideas and people because only specific audiences are allowed to see and use those department sites. They do not constitute social media. Social media exposes users to people who are different and people who are elsewhere.

A military service-only Facebook site would miss the whole point. Similarly, collaboration via mass e-mail is a poor substitute for building online communities across traditional boundaries. E-mail is fine for distributing monologues. Twitter and Facebook enable a more organic back-and-forth type of discussion.

Over the past 30 years, the Defense Department has embraced new technologies such as computers, the Internet, cell phones, BlackBerrys, videoconferencing and more. The department’s processes have changed with each new invention—despite the risks in embracing such technology. No one suggests the department should not have brought computers into the work force because computers increase the risk of massive data compromise (although they do). That would have been a silly policy. The decision to disallow the use of social media because it is too risky is just as silly. Yes there are risks, but the risk of not using these tools is even greater.

It is time for the Defense Department to embrace the next evolution of technology: social media. The time has come for the department to acknowledge the change that is transforming the world. Social media is sparking a revolution among those industries and enterprises with the vision and courage to embrace it. That is not hyperbole—it is an understatement.

It is time for the department to recognize that social media enables workers to find, connect to and collaborate with relevantly skilled experts from around the world. It increases their situational awareness of a wildly dynamic technology environment, and exposes them to ideas, people and communities that can play a huge role in supporting their job and their mission.

It cannot be ignored and should not be blocked.

Maj. Daniel Ward, USAF, is the chief of process improvement and reengineering in the Acquisition Chief Process Office, Office of the Deputy Assistant Secretary of the Air Force for Acquisition Integration.

Carol Scheina is the managing editor for Defense AT&L magazine at the .

Join the ongoing conversation in SIGNAL Connections. Go to http://bit.ly/missioncritical. 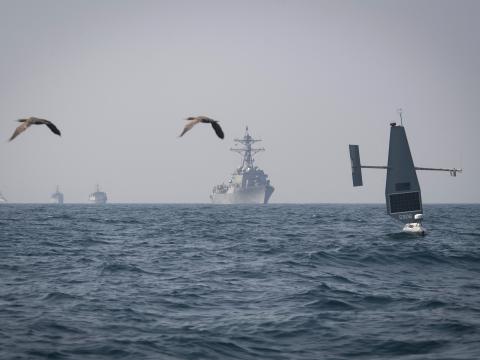