The nation’s cyber force, when called upon, deploys to other nations to protect against nefrarious adversarial behavior in the digital realm.
By Kimberly Underwood 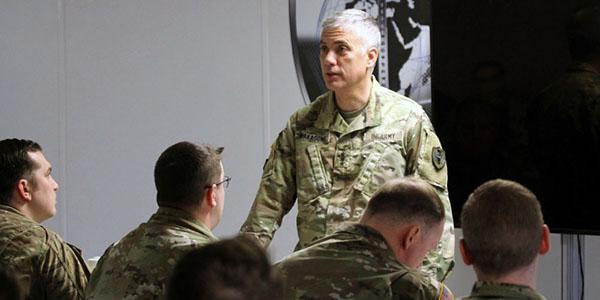 The U.S. Cyber Command, at the invitation of foreign governments, sends teams of cyber warriors overseas to aid in the search for, analysis of and protection against adversaries conducting cyber warfare.

While U.S. forces frequently deploy overseas, this is a different kind of military support. Instead of taking tanks, helicopters and ships, the U.S. military sends its cyber warriors, armed with their adroit offensive and defensive skills and digital tools.

Gen. Nakasone presented the keynote address on May 27 as part of AFCEA’s Spring Intelligence Symposium, held virtually May 25-27.

Gen. Nakasone @NSAGov @US_CYBERCOM: Why does it matter if the average person’s PII is stolen? Because it becomes part of a treasure trove of data, whether it is from genealogy companies or social media, which our adversaries can use against us #AFCEAIntel @ AFCEA_Intel pic.twitter.com/gOQNCfcWex

The release of the 2018 Defend Forward policy, which is the “cornerstone” of the Department of Defense’s cyber strategy, outlined the need for this particular kind of deployment.

“It set an important tone stressing just how serious these threats have become,” Gen. Nakasone said. “It acknowledged that defending the United States in cyberspace requires executing operations outside the U.S. military’s networks,” the commander explained.

Cyber Command began hunt forward deployments in 2018, based on “invitations from a foreign government to work with them to hunt on their networks to look for adversaries,” he stated. “Now why is that important? Because, as you can well imagine, as we go out broadly and hunt on different networks, we can find adversaries, we can identify their trade craft and identify their tools.”

He reasoned that by performing these forward deployed cyber missions, it broadly grows the protections against adversaries—China, Russia, North Korea and Iran, in particular—that are operating with a scope, scale and sophistication that has not been seen before, Gen. Nakasone acknowledged.

Finding and broadcasting information about an adversary's cyber weapon provides a crucial inoculation, the commander stressed.

“It is not just the country that requested us or the for the United States,” Gen. Nakasone said. “It means every single person that is able to get this information, so that they understand the tradecraft of our adversaries. That is really powerful.”