Making the Case for a Re-imagined MQ-9 Reaper

The Air Force should ensure that is retains, maintains and modernizes the stalwart ISR aircraft, experts say.
By Kimberly Underwood 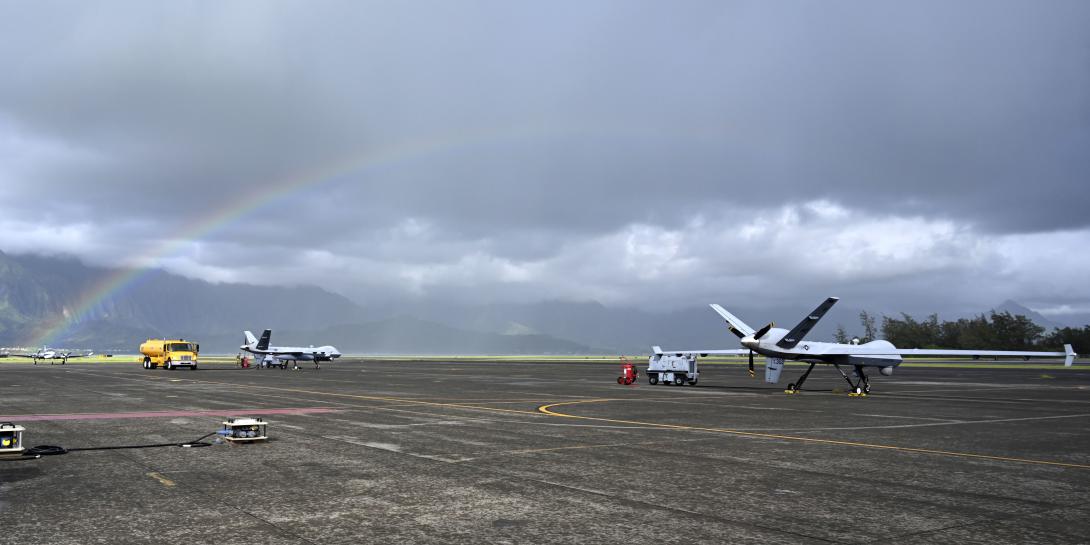 Two MQ-9 Reapers are parked on the flight line during the Air Force’s Exercise Agile Combat Employment Reaper on September 20, 2021, on Marine Corps Base Hawaii, Hawaii. Reapers joined on MCB Hawaii from multiple bases across the continental United States for the exercise. Experts purport that cutting the MQ-9 Reaper program would harm U.S. capabilities and ability to protect itself. Credit: U.S. Air Force photo by Airman 1st Class Adrian Salazar

The U.S. Air Force would be foolish to cut its MQ-9 Reaper program, as the unmanned aircraft provides key strike and intelligence, surveillance and reconnaissance, or ISR, capabilities that will still be very much needed into the future, an expert claims. Amidst great budgetary pressures, the service is proposing to cut the program in 2035.

“The reality is that the MQ-9 remains 100 percent tasked, if you talk to these [MQ-9 Reaper] units, they are still fully operating,” emphasized Lt. Gen. Larry Stutzriem, USAF (Ret.), speaking to a group of reporters yesterday at the Air Force Association’s Mitchell Institute. The institute released a policy paper, "Re-imagining the MQ-9 Reaper," after a two-and-a-half-year study about the considerations of keeping the unmanned aerial platform. “It is recognized by the U.S. combatant commands and many others that the MQ-9 is very well tailored, is optimum, and at the lowest costs, for the missions today and those mission aren’t going away any time soon.”

Even though the U.S. military has withdrawn from Afghanistan, the MQ-9 Reaper continues to be completely subscribed for ISR missions, and the demand for its operations will likely grow in the future as part of the military’s over-the-horizon posture in a near-peer environment, Gen. Stutzriem added. “It is the only platform that can deliver ISR and strike at the lowest-cost flying per hour,” he said.

Moreover, the “most relevant aircraft” in the Air Force’s inventory can easily be adapted to other missions, Gen. Stutzriem purported. “It is not a legacy aircraft in terms of uses,” he said.
“The MQ-9 remains very relevant.”

Possible expanded uses could include:

Naturally, “some” investments would be necessary to add additional sensor, jamming, resilient communications links or warning systems to the aircraft for it to operate in an increased threat environment, the general acknowledged. In addition, the modified B version, known as the Big Wing, offers even greater endurance to more than 40 hours, flying at an altitude of up to 45,000 feet.

“The MQ-9 is not difficult,” he stressed. “It is highly adaptable beyond its current uses. One of the reasons that makes it so adaptable is that it is unmanned. And so, we can take a lot more developmental risk.”

In September, the manufacturer of the MQ-9 Reaper, General Atomics Aeronautical Systems Inc., successfully demonstrated operations of the aircraft in the Arctic, flying the unmanned aerial vehicle north from Grand Forks, North Dakota, through Canadian airspace past the 78th parallel. Relying on Inmarsat’s L-band Airborne ISR Service for its communications at the very high latitudes, the aircraft flew 4,550 miles in 25.5 hours, one of the longest flights of the MQ-9.

This demonstration showed the aircraft’s ability to operate in the Arctic—at least initially, the general stressed. When combined in a fleet of MQ-9s, it could provide a powerful capability to that environment, which is growing in strategic importance.

“They can actually work in a network relay,” Gen. Stutzriem stated. “You wouldn’t have just one of them, you could have 20 or so of them in a relay.”

The Air Force also held the so-called Exercise Agile Combat Employment Reaper in September in Hawaii to test out the unmanned aircraft’s operations under the service’s Agile Combat Employment, or ACE. The service is aiming to leverage the ACE concept at scale for its day-to-day operations. The Air Force has spent the last two years developing groups of airmen and associated assets to be deployed in an agile manner around the world as a way to address near-peer competition. The MQ-9 exercise looked at how airmen could conduct rapid refueling, or “hot-pit refueling,” while power is still being applied to the aircraft, essentially minimizing the time between landing and relaunch.

Such ingenuity is at the core of the airmen who operate the MQ-9, Gen. Stutzriem said.

“I’ve done deep dives at three different MQ-9 squadrons and with special ops [operations] groups, and I can hardly believe what the airmen have done with their teams, shoulder-to-shoulder with contractors and technologists, to advance the tactics and capabilities on the fly, in combat operations, under a lot of pressure,” he noted. “It’s eye watering. And I think generally, there are a lot of people, including in the Air Force, who have not taken the opportunity to connect with the operations and may misunderstand how this weapon system [and the airmen] conduct MQ-9 missions today.”