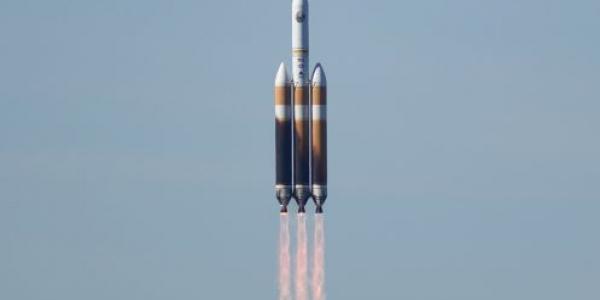 The United Launch Alliance Delta IV Heavy rocket lifts off from Vandenber Air Force Base on January 19, 2019. With its rapid fielding pace, the Space Development Agency plans to launch initial capacity of its new network in 2021. U.S. Air Force photo by Michael Peterson

The threats to the U.S. military and the nation are such that additional space-based capabilities must be rapidly fielded. A proliferated low-earth-orbit constellation of satellites and sensors will connect to the military’s tactical legacy datalinks and weapons systems to deter against advanced threats. In particular, beyond-line-of-sight targeting capabilities and enabling the detection, tracking and fire control of advanced missile threats will be a part of the system that the Space Development Agency deploys as part of its National Defense Space Architecture, or the NDSA, says the agency’s director, Derek Tournear.

“The architecture is focused on delivering the initial capabilities of beyond-line-of-sight targeting for time-sensitive targets, both ground and maritime,” Tournear states. “We need to get that up there as rapidly as possible. And because more advanced missiles are being fielded [by adversaries], we need to have a space sensing layer that can detect, track and then set down fire control information to be able to take out those targets. So that’s what drives us. That’s why it’s important. We believe that these threats are in existence now, and we believe that we need the capabilities fielded as soon as we can.”

The Space Development Agency’s (SDA’s) effort to create and sustain resilient, affordable and lethal space-based capabilities as part of the NDSA for the military also includes providing the space-based backbone for the services’ Joint all-domain command and control, or JADC2.

The agency’s speed-priority approach is to roll out minimum viable products in tranches starting in fiscal year 2022 and then every two years thereafter. “And we should not ever try to slip schedule to add more requirements,” the director emphasizes.

Specifically, the SDA is looking to field advancements across the transport, battle management, tracking, custody, deterrence, navigation and support layers of the NDSA. The agency also is addressing capability gaps in the military’s space solutions, including providing space situational awareness in extended space to cislunar between the Earth and the moon’s orbit.

First off, the agency is providing a backbone transport layer, made up of hundreds of satellites in low-earth orbit (LEO) that will all be optically connected to form a mesh network in space, the director states. As part of the first deployment of capabilities in the next year, in Tranche Zero, the SDA will fly about 20 transport satellites to form the network and enable communications to legacy tactical datalinks.

“In addition to being able to talk to each other, that data transport layer also can talk directly via existing tactical datalinks, such as Link 16, and down to weapons systems that are already fielded and already have that capability,” Tournear says. “We are working very closely with the Army to ensure that we can talk from our transport satellites down to their TITAN ground system, so they could then further disseminate the data to other weapons systems that aren’t connected via Link 16. And we’re working with the Navy for similar systems to do that over their CEC comm channels.”

Three sensing layers will feed data to the transport layer: (1) a tracking layer made up of overhead persistent infrared (OPIR) sensors to detect and track adversarial advanced missiles; (2) a custody layer that would allow military users to send target location information in real time directly to weapons systems; and (3) a deterrence layer for space situational awareness.

“The sensing satellites will detect the missile, send the track to the transport layer where that data could be fused with other data and then send [it] down to the ground to the actual weapon systems that would engage the threat,” he explains.

The SDA will fly eight wide field-of-view sensors in Tranche Zero to demonstrate the traceability that will be used for hypersonic glide vehicle detection over the entire globe, as well as for passing the data either directly to the ground or to the transport satellites.

“Shortly after, but still part of Tranche Zero, we’re working with the Missile Defense Agency to fly the hypersonic ballistic tracking space sensor satellites, or HPTSS, either one or two for what we call our medium field-of-view sensor,” Tournear says. “Our goal is that our wide field-of-view sensor will tip the medium field-of-view sensor and that sensor will allow us to actually even get more sensitivity and a better fire control solution for these hypersonic glide vehicles. And again, that data would then go either directly to the ground or to the ground via the transport satellites.”

For the custody layer, the SDA will rely on mission partners—the Army, Air Force and other agencies—to build out ISR satellites to provide the beyond-line-of-sight targeting capability.

In Tranche Zero, the SDA is working to show that it can move data to the ground from the mission partners, send data from the partners directly back up to the SDA transport satellites, and then send that data over the mesh network to other areas of interest.

“For example, if the Army had one of their TITAN ground stations and they have that located in Germany, they could download the data to that system in Germany, send it back up to transport, where then we could use the transport satellites to go down to an F-35 in the INDOPACOM Theater via Link 16,” Tournear clarifies. “That’s one example that we’re going to demonstrate in Tranche Zero.”

For the third sensing layer, the SDA is conducting studies on how to best design a deterrence solution that provides detection and tracking beyond geosynchronous orbit out to cislunar space. And that sensing would feed data back into the transport layer. “Anything operating in that environment has historically been ignored just due to a lower priority over items that are in LEO or geosynchronous, so we want to look in that area to make sure that there are no activities going on there that we’re unaware of,” the director states.

A battle management layer of the NDSA architecture would tie all the layers together and would be where onboard processing, algorithms for autonomous operations and any automatic target recognition algorithms would run. “In order to do those missions, essentially the autonomous detection and tracking, and targeting of time-sensitive targets and missiles, there is a lot of processing that needs to be done,” he clarifies. “That processing will reside ultimately on board the sensing satellites as well as the transport satellites. That’s our battle management layer.”

Moreover, the position, navigation and timing (PNT) data of the NDSA transport layer offers an additional PNT signal to individual users that are tied into the associated comm network. “We’re not going to broadcast like GPS does, but folks that are on our comm channel can get navigation using our backbone,” Tournear offers.

To help enable the military’s JADC2 operations, the NDSA platform would connect to all of the services’ ground and air networks tied into JADC2. For example, the Air Force’s Advanced Battle Management System, Aperture One and Radio One networks would link to the SDA’s transport satellites. “We would be the backhaul for that data across our mesh network,” he says.

In the rest of this fiscal year and next, the agency is conducting a set of demonstrations focused on the communications backbone technology to demonstrate the functionality of the optical connectivity. Additionally, there will be experimentation of the OPIR tracking layer, collecting IR data over a wide range of infrared bands, to see which band will best perform background light rejection with the missile detection system in a LEO environment, Tournear states. The agency also is preparing the related software and algorithms to show that their custody satellites can run the algorithms that operate the flight electronics and can perform sensor and data fusion to tie all of the signals together.

The director also will be working on growing the SDA. The agency started with less than five employees when it was created in March 2019, and there were about 12 people when Tournear took over, including a mix of contractor and government employees. “We’re just now up to 60, including contractors, FFRDC [federally funded research and development center] support, government career civilians and military personnel that are detailed to SDA,” he shares. “Eventually, we’ll get to about 200. [We are all working] to get the capabilities out as rapidly as possible.”

Notably, the SDA is slated to move into the U.S. Space Force by 2022, as dictated by the National Defense Authorization Act of 2020. The SDA began as a defense agency under the Office of the Undersecretary of Defense for Research and Engineering (USDR&E) and the agency will retain ties with OUSDR&E, the director notes.

“In our role, we have enough autonomy and authority to essentially establish what we need to put in place to deliver the capabilities and deliver these satellites,” Tournear offers. “And our plan is to continue to push forward and deliver that tranche at the end of FY 2022, at which point, once we start to fly and operate those satellites that are doing our data transport mission, as well as our missile tracking mission, then the new architecture will show that it has military utility. And at that point, the intention is to roll out from underneath USDR&E, where we then become the innovation arm of the U.S. Space Force, and we will continue to do the same mission, but underneath the U.S. Space Force.”

He clarifies that the USDR&E “will still always have the role with the assistant director of space, whose role is to ensure that the overall Department of Defense space architecture fits together and has some sort of unity and a road map that makes technical sense.”

The NDAA 2020 also called for the establishment of a new assistant secretary of the Air Force for Space Acquisition and Integration, which will have purview over the Space and Missile Systems Center, the Space Rapid Capabilities Office and the SDA, Tournear adds. “That design and construct is still being developed, primarily by the Space Force in conjunction with others, and any final construct would be a design that General Raymond and Secretary Barrett and Secretary Esper would all have to decide upon,” he shares. “And exactly how that construct looks on an org chart is still being determined.”