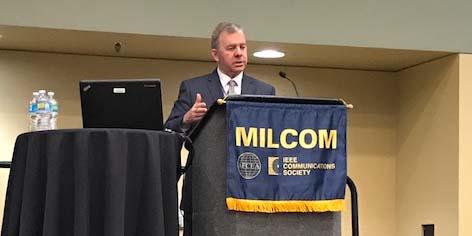 This is a necessary strategy given that adversaries are increasing their hostile activities in space and cyberspace, warned Robert Tarleton, director, Military Satellite Communications (MILSATCOM) Systems Directorate, Space and Missile Systems Center, Air Force Space Command, speaking in Baltimore at MILCOM, co-sponsored by AFCEA and IEEE.

Tarleton, who is responsible for a $45 billion budget for both legacy and emerging programs, believes the United States needs to harness these partnerships to build MILSATCOM resiliency and boost capabilities, especially as space and cyberspace are more contested and congested. “We need to improve how we implement MILSATCOM to build resiliency and enterprise agility,” he said.

Already, Air Force Space Command is working with nine countries either on the Wideband Global Satellite Communications (WGS) or the Advanced Extremely High Frequency (AEHF) program. Three new partnership agreements are in development and “multiple new partnerships” are being explored, Tarleton said. The Czech Republic and Norway have just been added.

The United States is putting two payloads onto a Norwegian satellite under agreement with Space Norway, a subsidiary of the Norwegian Space Centre. They had available payloads for the U.S. and other countries, Tarleton said. The move is saving $800 million for DOD. The center had to work fast to meet Norway’s deadlines and secure the payload space.

Exploiting commercial satellite capabilities will reduce costs further dramatically, Tarleton added. Already, DOD spends more than $600 million per year on commercial leases under the Pathfinders and pilot programs, and the demand for commercial satellite communications will only grow. In addition, he emphasized that acquisition reform is gaining traction within the DOD, a necessary improvement to harness international and commercial efforts. Leaders across the Air Force and DOD are seeing the need for tailored requirements, speed in acquisition and improved processes.