The Air Force is taking its force generation concept to provide a more lean, agile and lethal force in Europe.
By Kimberly Underwood 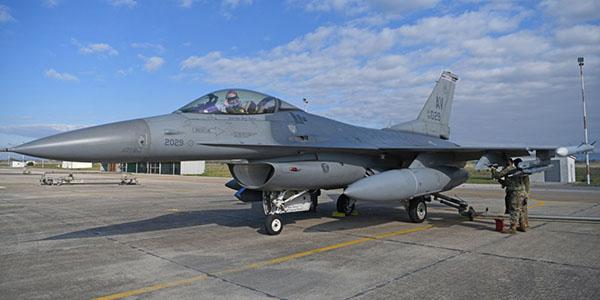 U.S. Air Force Airmen from the 31st Fighter Wing perform a preflight inspection of an F-16 Fighting Falcon before takeoff during exercise Agile Buzzard at Decimomannu Air Base, Italy, in January. The Air Force is expanding its concept of Agile Combat Employment to apply to Europe. Credit: U.S. Air Force photo by Staff Sgt. Heidi Goodsell

The U.S. Air Force is moving forward with its concept of Agile Combat Employment as a way to increase its force generation capabilities in a contested environment. The Pacific Air Forces, or PACAF, under Gen. Charles Q. Brown, USAF, who is moving into his role as the chief of the Air Force on August 6, replacing a retiring Gen. David Goldfein, USAF, began looking at how to engage small groups of multifunctional airmen to increase capabilities in the Indo-Pacific region last year. In February, PACAF conducted training of airmen in this so-called Agile Combat Employment concept, which is designed to shift operational-level forces into smaller, tactical-level forces.

The aim is to have a more lean, agile and lethal force in the face of near-peer competition. However, this kind of agile force that can generate airpower from multiple locations requires a different kind of command and control (C2) environment, as well as advanced planning concepts and logistical supply line support.

“As Gen. Brown and his team were refining the concept in the Pacific area, we saw an application here in Europe,” he said. “And while they have to deal with what we would call the tyranny of distance in the large spaces in which they operate, we call it operating in the tyranny of proximity. We're going to be closer, operating very tightly aligned with our partners and allies here in Europe. And so, while there are some fundamental similarities, there are also some fundamental differences in the way that we're going to approach this problem.”

The European commander and the PACAF commander signed a concept of operations, or CONOP, for Agile Combat Employment that they are implementing, with the goal of bringing it to the greater Air Force.

“Both of us are leveraging it to provide to the broader Air Force enterprise our view of how we would execute this concept,” Gen. Harrigian said. “I think that's very helpful in that it helps the Air Force enterprise understand what we're trying to do so that as we look at those things that are similar, we can levy those requirements in terms of training resources to help us achieve the goals of this particular concept.”

Gen. Harrigian is looking at both proactive and reactive measures to ensure that airmen in the European AOR are able to be proactive in terms of force distribution and generate combat power, staying “strategically predictable, but operationally unpredictable.” A key component of that plan is preparing airmen to have additional skill sets outside of their core Air Force specialty, or multi-capable airmen.

“In the CONOP, one of the areas that Gen. Brown and I have both focused on in terms of similarity across the Air Force enterprise is the need to have multi-capable airmen,” he stated. “We acknowledge the fact that as we move our force packages around the battlespace, we can't have these large numbers of airmen that we have to deploy to a location and have all the different functional areas at that location because that footprint will just get too large. So, as we've worked with our teams together, what we've tried to do is identify those skill sets that an airman could execute. For instance, you have a weapons loader who previously only did weapons loading, but we can also use that individual, for instance, to fuel an aircraft. But this is expanding in a smart manner.”

As far as the continued reliance and budgetary priority of the service’s remotely piloted aircraft (RPA) mission, which has served the military well in counterinsurgency environments, Gen. Harrigian confirmed that RPA assets—in particular, the Global Hawk and MQ-9 Reaper—and the capabilities that those platforms enable, especially in intelligence, surveillance and reconnaissance (ISR), are still applicable in facing near-peer competition from adversaries China and Russia. Some of the capabilities that the military has placed on the Reaper, for example, have helped from an operational perspective in exposing malignant Russian activity. The general also has seen with Air Forces Africa that RPA is playing a key role “exposing and helping us compete in great power competition environment” on the continent.

“As we look at the Global Hawk and the Reaper, clearly, there's still a demand signal out there from the Combatant Commands to have those types of capabilities,” he stated.

General Harrigian tells reporters on the Defense Writers Group call this morning that the plan to roll out F-35s to RAF Lakenheath is still on track for 2021 @HQUSAFEAFAF @usairforce @48FighterWing pic.twitter.com/Jgjo32pQ8J

The Air Force has to balance where to invest continued dollars in its broader portfolio of ISR, strike capabilities and tankers, especially as it pursues Joint all-domain operations, so they might not pursue RPA in the numbers they previously had needed, he clarified.

“We do need to make sure [to] look holistically at what each of the capabilities bring to the ISR portfolio, that we do all that we can not to duplicate those capabilities that are now a bit older,” Gen. Harrigian said. “[We need to] as Gen. Goldfein has highlighted, invest in those capabilities that will really lead us into this Joint all-domain command and control environment that we envisioned.”

Notably, the deployment of the MQ-9 will play a role in the service’s pursuit of Agile Combat Employment, especially in the Baltic region, the general added. It provides understanding of Baltic operations, gives assurance to partner Estonia and overwatch and ISR capabilities.

“The Estonian MQ-9 deployment really is one of our initial steps in demonstrating the agility of our MQ-9 capability from an Agile Combat Employment perspective,” he said. As we looked at what was frankly a runway closure in Poland where we typically operated, I wanted to use this as an opportunity to quickly move the capability to another location that would afford us opportunities to not only better assist in a rapid fashion, but at the same time, allow us to gain exposure and operating [experience] up in the Baltics. I wanted to be able to launch and recover it up there and understand what that environment is like to work in.”

You may also enjoy:

Joint Command and Control Comes out of the Shadows