Out of sight can never be out of mind when fighting in the beyond line-of-sight domain.
By Maryann Lawlor 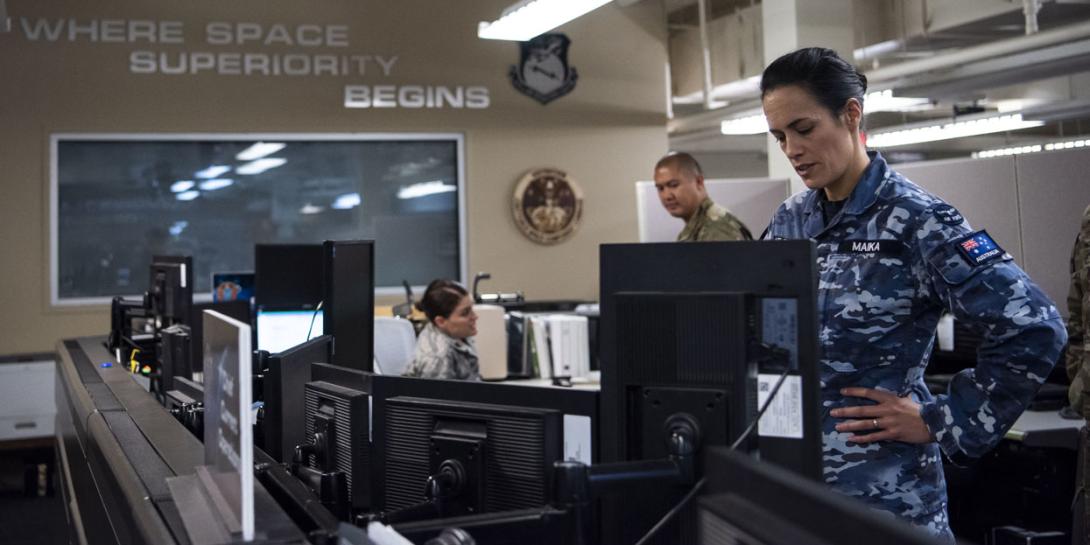 Aggressive Chinese and Russian counterspace capabilities have fundamentally changed threats in the space domain, and the United States must now make some transformational changes to its strategic warfare in this new environment. The U.S. Defense Department overall, and the U.S. Space Force and unified Space Command in particular, face three critical challenges that will be fundamental to using space to warfighters’ advantage and remaining a world military leader.

Gil Klinger, vice president, space, cyber and intelligence, Raytheon, says the first challenge is changing the mindset of the Defense Department and the intelligence and operational space communities. “Both the DOD and intelligence community are now operating in what was perceived as a largely benign environment and now is changing into one in which combat is a virtual certainty, in conflict and in crisis,” Klinger states. “In contrast to every other possible domain, with the possible exception of cyber, there is no mature American way of waging war in space.”

The United States’ shortfall in this area isn’t an indication of a lack of capabilities or “smart people,” he’s quick to add, but rather that space previously has not been perceived as an operational environment. “Throughout the Cold War until the last 15 or 20 years, space capabilities and services had a war time role, which was supporting the war, and that remains the case. But now, space assets must become fighting capabilities because the domain is almost certain to be part of combat operations. That is part of the mindset change,” he explains.

To accomplish this change, the space community must recognize the need to fully incorporate all the space U.S. space forces into warfare. It’s not just keeping the satellites operating, he says. Supporting operations also must include harmonizing, integrating and becoming part and parcel of the operational capabilities that U.S. forces bring to bear in other domains. “We need to develop a joint-smart space force and a space-smart joint force,” Klinger proposes.

The second problem the U.S. military and intelligence community must solve is determining the material and nonmaterial measures, actions, investments, research and development, training, doctrine and strategy needed to confront the new threats. “The first challenge is in thinking; the second is providing the systems, services, capabilities, hardware, software and accompanying concepts of operations and tactics, techniques and procedures to effectively realize our objectives in this changed environment,” he states.

Klinger relates that the third challenge is ascertaining how the U.S. government can harness the enormously expanded and still maturing space sector to its benefit. This work must include deciding how to use capabilities and partnerships the emerging space domain presents. In the past, progress in this area was a function of government policy. The military decided to involve assets that were either U.S. or allied owned and operated systems in warfare. Space as a fighting domain changes the equation, he states.

This isn’t a criticism but rather a warning, a heads up, he quickly adds. In some ways, the United States has been thinking about space as assets and a domain to be protected. The military’s mindset is that battle damage in space, like on a terrestrial battlefield, would be temporary and reversible.

But damage to a space asset is a far cry from a bomb dropping on an airfield or factory in World War II, Klinger explains. In space, replacing capabilities can take months and even years, and in the meantime, the intelligence those assets has been gathering is no longer immediately available to analysts, commanders or warfighters.

One approach would be surgical strike warfare in which U.S. and allied assets would be left essentially intact, but this method requires larger amounts and different types of assets. “The more eloquent the effect that is desired, the more intensive is the intelligence tail that’s associated with the capability that will create that effect,” Klinger explains.

This isn’t uncharted territory in other fighting domains by any means, he adds, but for the space domain, it is very labor intensive in terms of intelligence collection, analysis and demands.

In addition to the changing threats in space, the pace of technical advances is affecting how the U.S. military must view space as a warfighting domain. “When launching a satellite cost almost as much as the satellite itself, there was a high premium on multiple redundant systems, on making sure satellites could live a long time. We would pack as much capability as we could on a single spacecraft, and because the environment was relatively benign, packing all that capability on a large craft wasn’t a problem. There was no operational downside because technology wasn’t turning over at the rate that’s happening now,” he explains.

Regarding acquisition, Klinger admits regulations serve a purpose, but the change the space domain brings to warfare means the Defense Department must learn from the commercial sector. “Most businesses on their slowest day are light years faster than the DOD intelligence community except when you’re talking about combat operations,” he points out.

“The challenge that circumstance translates into for the Defense Department space acquisition community and for the users in terms of defining requirements is that it’s no longer a question about wanting to do business with the commercial world, it’s now how do we learn how to do this? How do we get our cycle times down?

“When we see the other transaction authority and streamlined acquisition, they are grabbing or inventing the tools that either previously didn’t exist at all or the existing tools were not sufficient to match the rate, the turning radius and the acceleration rate that the private sector routinely operates under," he added.

“In a way, that enables two otherwise willing partners—the government and a company—to do business in a way that benefits both. It’s a question of the will and leadership on both sides: the will to collaborate and take measured risks and think more creatively about something we’ve done for 60 years. The original recipe doesn’t work anymore. It’s not that the recipe is wrong, it’s that the ingredients have changed and the people coming to the restaurant are different. It’s a different restaurant,” Klinger states.

How fighting in the space domain challenges the intelligence community is one of the topics that will be discussed at the classified AFCEA International Spring Intelligence Symposium, which takes place March 24-25 in Springfield, Virginia. Read the agenda online.