Swarming to a Better Robot 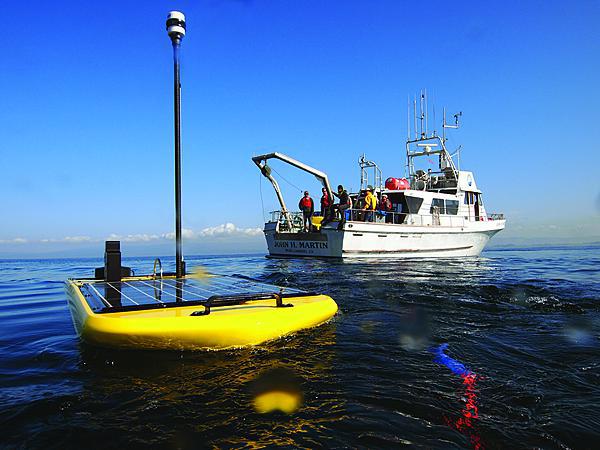 Robotics experts are using the swarming behavior of insects and fish as a model for software that will operate the next generation of underwater robots. Fleets of robots not only will be able to navigate to a common goal, but they also will have the means to deal autonomously with unanticipated factors, much as insects and fish can change behaviors based on the circumstances.

In nature, a swarm consists of many individuals with the innate ability to behave individually but operate toward a collective goal as needed. In a similar fashion, scientists are developing advanced mathematical algorithms and software to give underwater robots the ability to navigate toward the same location while also enabling them to deal independently with changing factors such as currents, obstacles and even other approaching ships that are not part of the swarm.

The distinction between a group of robots that individually receive the same programming to reach the same goal and a group of robots that behave like a swarm is that the swarming vehicles collaborate to achieve a set of tasks, explains Pierre Lermusiaux, head of the Multidisciplinary Simulation, Estimation and Assimilation Systems (MSEAS) research group in the Department of Mechanical Engineering at the Massachusetts Institute of Technology (MIT). The set of tasks and the collaboration give the swarm a purpose, he adds, and that purpose becomes an added factor in the mathematical programming of the robots. Lermusiaux leads a team of mechanical engineering graduate students and research scientists with expertise in mathematical algorithms and their application in robotic systems.

The challenge until recently has been to write software that finds optimal paths for multiple underwater robots in near real time, which allows them to respond quickly to changes as they encounter them on the path to their goal, Lermusiaux explains. Solutions that have been developed so far by his group take into account a long list of factors, including the speed and direction of underwater currents, the flow rate of those currents as measured by sensors on the robot, and even physical obstacles. “One of the goals of this work is to determine the time-optimal path for the UUV [unmanned underwater vehicle] to come up with the shortest travel time,” he notes. He likens this characteristic to the behavior programmed into unmanned aerial vehicles, which are able to detect and use shifts in wind direction and the jet stream to fly from one place to another.

The algorithms also can be adjusted to direct underwater robots that are powered by traditional means, such as an electric motor with a propeller, and those that use new and novel techniques to harness the energy of waves and/or underwater currents. In some cases, Lermusiaux explains, this can help conserve energy needed to propel the robot by as much as 10 percent, translating into lower operating costs.

Swarm programming developed by the MIT MSEAS group has been used successfully to guide a fleet of 20 automated underwater robots, but future fleets could include as many as 1,000 or more such devices. Scaling, or the ability to adapt to a fleet as small as two or as large as thousands, is an important characteristic of the swarm programming developed by Lermusiaux and his colleagues. While algorithms used for underwater robots could, in theory, also guide unmanned aerial vehicles, the same would not necessarily be true for land-based robots, he says. “With land vehicles, you can only go on roads,” which limits the amount of autonomy a land robot can be given. A sea robot, in theory, has the whole ocean to use to plot a new course.

The next step for the MIT MSEAS team’s research on swarming underwater robots is to address the uncertainty of the environmental factors encountered by the robots as they ply the seas. Being able to program for that uncertainty would give the robots additional tools to determine their own best paths autonomously, whether the priority is traveling the shortest time to a target, expending the most minimal amount of energy necessary, or collecting a predetermined amount of data. Their research is funded by the Office of Naval Research and the MIT Sea Grant College Program.

Industry joins academia in its interest in developing underwater robots that can swarm. While Lermusiaux and his MIT group continue their work refining the mathematics behind the operation of unmanned underwater robots, a small start-up company in Sunnyvale, California, is manufacturing and deploying its own unmanned underwater vehicles capable of operating in a swarm. This product uses many of the same principles being developed at MIT. The robot, known as the Wave Glider, is produced by Liquid Robotics, a firm established in 2007 to capitalize on the development of an unmanned, station-keeping data buoy for monitoring humpback whales.

The robot’s two-piece design allows it to operate autonomously in the open ocean for months at a time without the need for refueling or maintenance. A top unit resembling a surfboard contains radio antennas, panels of solar cells, data-gathering sensors and a small computer. It also includes the Iridium satellite telephone system, which is used for command and control, and for relaying collected data back to the company’s Hawaii operations center. That unit floats on the surface of the ocean, tethered to a submerged mechanical unit by a 7-meter-long elastic umbilical cord. As the top unit moves up and down on the surface, that motion is translated into forward movement by mechanical vanes on the submerged section, pulling along its topside partner. Adjustments in heading are made by the computer in the top unit manipulating a small rudder at its stern.

The firm’s officials say that since its first deployment in 2008, the Wave Glider has logged more than 100,000 miles of operations in oceans all around the world, performing data-gathering chores related to the environment, marine biology, meteorology and oil exploration. A military variant of the Wave Glider, known as the SHARC, currently is being evaluated by researchers at the U.S. Naval Postgraduate School in Monterey, California, for possible use by the U.S. Navy.

The software that operates the Wave Glider is being developed by James Gosling, Liquid Robotics’ chief software architect. In information technology circles, he is best known as the original author of the Java computer programming language. Java now is found in millions of personal computers and smartphones all over the world and was developed during Gosling’s tenure with Sun Microsystems.

To demonstrate how the swarming underwater vehicles work, Gosling points to a scenario already tested with the Wave Glider in which a fleet of the robots is assigned to form an ocean-going “picket fence” to patrol the outer boundaries of a marine sanctuary. The fleet is programmed to make changes as needed. To deal with constantly changing conditions, the swarm has to adjust the position of all its craft as other ships pass through, or as new robots are added to the swarm, or if a robot develops mechanical problems and has to return for maintenance.

In another scenario, Gosling describes how a fleet of swarming robots are deployed to survey the chemical makeup of the ocean over a widespread area. “They all have to keep coordinated; they all have to individually respond to possible collisions; to make adjustments to the survey pattern around islands and to other changes as they occur,” he explains.

A number of factors allow underwater robots to operate in a swarm, Gosling states. “You have to have situational awareness, and in the case of the Wave Glider, we have pretty good communications with the robots. Every robot has a Global Positioning System (GPS) receiver, so we always know where we are,” he continues. The robot also has to be programmed with a definitive mission and has to be in a form that can receive the navigational algorithms. He also says an important part of the Wave Glider is the command and control system, which enables human operators to make adjustments to the swarm as needed.

While the Wave Glider system relies on almost constant contact with its operations base, Gosling says that his group also has planned for the possible loss of communications through the Iridium satellite system. In case that happens, the robot is programmed to continue executing the last instructions it was given and to continue in that mode until satellite communication is restored.

While the design of the Wave Glider is structurally simple, Gosling says the robot’s design also is mechanically complex to account for its operation in the salt water of the open ocean. In addition to withstanding the corrosiveness of salt water, the robot must be designed to survive the extremes of storms at sea. A Wave Glider now being evaluated by the National Oceanic and Atmospheric Administration (NOAA) in the Gulf of Mexico recently was diverted from its previous data-gathering mission to instead obtain information about conditions at the sea’s surface during the approach of Hurricane Isaac in August. In the future, officials hope to deploy an array of robots like the Wave Glider to capture new information on how oceans contribute to the formation and sustainment of large hurricanes.

Liquid Robotics also is conducting its own demonstration of the Wave Glider’s capabilities known as PacX. Starting in San Francisco in November 2011, four Wave Gliders embarked on a trans-Pacific journey, with two robots bound for Japan and the other two headed for Australia. The trips are expected to take more than 300 days, and when completed, potentially will set world records for the longest distance attempted by an unmanned ocean vehicle. Along the way, the robots are collecting information about the ocean and are transmitting their positions and ocean condition data to a regularly updated website that Liquid Robotics is co-sponsoring with Google. At last report, three out of the four robots are continuing their journey, but Gosling acknowledges that the company has lost contact with one that is assumed to be missing at sea.

Liquid Robotics is one of at least a dozen companies globally that are manufacturing working UUVs capable of operating autonomously.