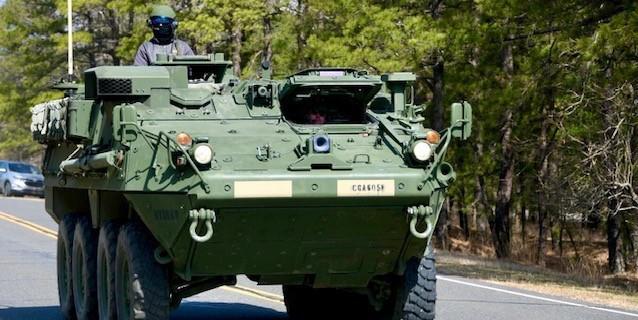 The U.S. Army for the first time has demonstrated during its Network Modernization Experiment the integration of three capability cards—one for positioning, navigation and timing, another for mounted mission command, and a third for the TSM tactical communications waveform. The capabilities are associated with the service’s open suite of standards and were integrated onto a Stryker combat vehicle.

The service also demonstrated air-to-ground and ground-to-ground interoperability with a UH-60 and Nett Warrior capabilities for the dismounted soldier. The ability to quickly change capability cards rapidly means the Army can modify vehicles for different mission types to meet emerging threats and improve mounted soldier lethality and survivability, according to a recent Army article.

The advance is part of the Army’s effort to develop a standard open standard architecture known as CMOSS, which stands for Command, Control, Communications, Computers, Cyber, Intelligence, Surveillance, Reconnaissance (C5ISR)/Electronic Warfare Modular Open Suite of Standards. CMOSS enables the Army to insert cards, each embedded with networked capabilities such as communications waveforms, mission command applications, and positioning, navigation and timing, into a common ruggedized chassis inside a tactical vehicle. It provides a plug-and-play alternative to custom-installing and upgrading individual communications systems and allows significant size, weight and power savings.

The CMOSS capability will be fielded with the Army’s network Capability Set 25 in 2025. The Network Modernization Experiment, commonly known as NetModX, is a field-based experiment run by engineers from the Army’s C5ISR Center.

The demonstration proved that the open architecture standard works, Army officials said. “We were able to bring together a number of solutions from a number of vendors and very quickly and easily—like within days—successfully integrate them and help them execute their mission,” Peddicord reported. “We really demonstrated the power of the standards. We were able to have vendors come in and very rapidly in the field drop their solutions in, and everything pretty much just worked.”

Christopher Jais, product manager, Positioning, Navigation and Timing Modernization within the Program Executive Office for Intelligence, Electronic Warfare and Sensors, verified the accomplishment. “As long as you’re compliant with those standards, we can take a card from one chassis to another, and that’s a pretty powerful tool as you start moving forward with this.”

Peddicord agreed. “One of the most powerful things we’ve enabled is small, frequent, incremental updates and upgrades. You don’t have to tear out everything root and branch to make things better.”