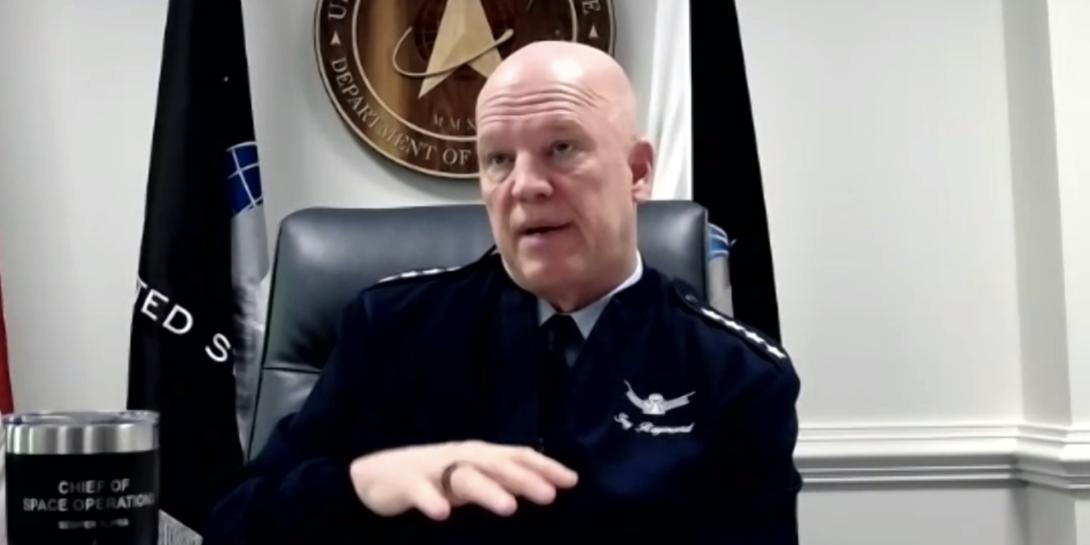 The formation of the U.S. Space Force has led to more advanced cooperation in the space domain with existing and new partners, according to the force’s chief of space operations. Gen. John Raymond, USSF, noted that some nations even followed the U.S. example in giving space an increased priority as a warfighting domain.

Speaking at a Defense Writers Group media roundtable, Gen. Raymond stated that the United States is stronger as a nation with a stable and secure space domain. “The United States is a spacefaring nation, and we’ve long known that access to space and freedom to maneuver in space underpin all the instruments of our national power,” he declared.

The general added that the Space Force has been a unifying force across the Defense Department and among agencies. These include the National Reconnaissance Office, NASA and other civil agencies. Commercial space also is a partner, he added.

“One of the critical pieces of work the Space Force is doing this year is to develop a force designed for space,” Gen. Raymond stated. “That’s what services do, and I told my team to build that force with coalition partners in mind from the beginning.” Once that force is designed and built, it would welcome the opportunity to partner with international partners.”

In its one year of operation, the Space Force has stepped up to its service-level responsibilities, the general continued. The coming year’s focus will be on integrating the Space Force with others, and that includes foreign nations. “One of the key folks we integrate with are our allied partners,” he said. “We’ve elevated America’s leadership in space further in global partnerships and alliances.”

Gen. Raymond continued that NATO declared space an operational domain shortly before the U.S. Space Force was stood up, and NATO followed by establishing a space center at NATO Air Command at Ramstein, Germany. After the Space Force was stood up, several countries followed suit by elevating their own space operations within their national defense organizations. The general cited France, Japan and the United Kingdom as three of these nations. “There is a significant understanding of the importance of space, and U.S. leadership in space is resonating across the globe,” he declared.

Japan specifically has been a focal point of the partnership effort, the general allowed. The Space Force has just signed a memorandum of understanding to place a hosted payload on a Japanese satellite to provide space domain awareness. The U.S. force aims to do more work with Japan’s newly established space unit. A member of Japan’s Air Self-Defense Force is assigned to Vandenberg Air Force Base with the multispace collaboration cell as part of the Combined Force Space Component Command. Japan also has been participating in U.S. war games.

These efforts extend beyond space-centric activities. Part of the Joint All Domain Command and Control (JADC2) effort must include machine-to-machine interfaces with international partners, the general offered. The Space Force stood up a coalition program office for C2 capabilities that are needed for space operations. He described how the partnerships have transitioned from one-way data stream agreements in which the United States would share information with its allies to true two-way partnerships with mutual benefit. “It’s way more than just data sharing,” he pointed out. “We train together, we operate together, we wargame together, we exercise together, we man operational centers together and, for the first time, we’re developing capabilities together.”

The force has also furthered the conversation with allied partners on norms of behavior, the general explained. These efforts have manifested in war games or combined operations. “I want my successors to have norms of behavior—rules and how to operate in that domain,” he said. The U.S. Space Force has opened up courses to train international partners in “Space 101” and domain awareness areas, he noted.

The Space Force faces what the general describes as a spectrum of threats. “The scope, scale and complexity of those threats are real today and they’re concerning, and it’s clear that our adversaries are developing counterspace capabilities that keep us from accessing the space capabilities that are so vital to us as a nation,” he warranted.

These counterspace measures include jamming of communications and GPS satellites, along with directed energy threats. Gen. Raymond cited China as having multiple ground-based laser systems of varying power levels that could blind or damage U.S. satellites. Russia has its own ground-based lasers with the same capability.

Some on-orbit satellites are concerning, he continued. Russia has a “nesting doll” satellite that opens up to release a satellite that in turn opens up to release another vehicle or projectile. Russia launched and positioned that nesting doll satellite in close proximity to a U.S. orbiter, he noted. In addition, one of China’s on-orbit satellites has a robotic arm that could be used to grapple a U.S. satellite. “The threats range from nonkinetic, which are more jamming, through kinetic,” he reported. “That full spectrum is something that is concerning to us, and it is why it is important that we have elevated space.” 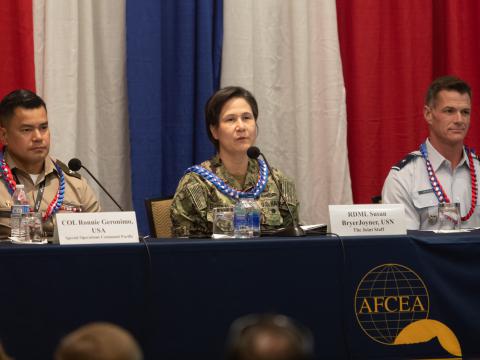 Officials from the five countries are expected to meet next month.
Image 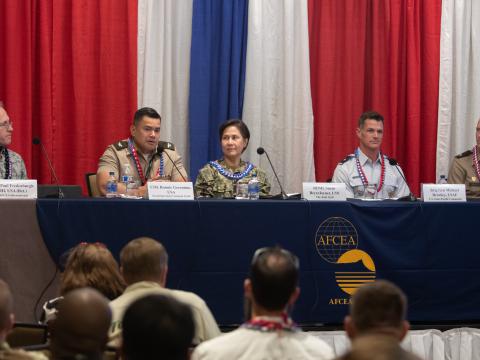 Australia and the United States take steps to integrate.