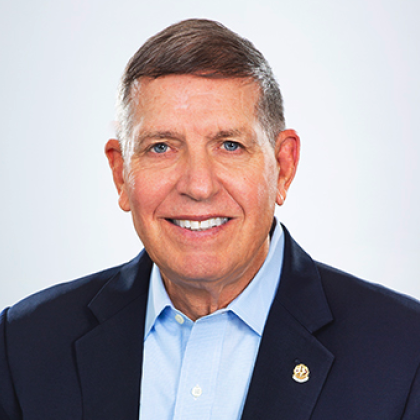 As vice president for Defense, Mike Warlick is responsible for oversight of AFCEA's defense engagement through events, the Defense Committee and AFCEA operations.

He served 29 years with distinction as a Marine Corps Officer focused on communications, information technology, and command and control. Mr. Warlick spent a significant part of his career leading and developing Marines. He commanded the Marine Corps Communication-Electronics School, training primarily enlisted Marines in 46 different occupational specialties. As director, Command and Control Systems School, Marine Corps University, he trained entry- and intermediate-level officers in all aspects of communications and information technology, to include command and control. His last assignment on active duty was as vice president, Marine Corps University.

Mr. Warlick has been a member of AFCEA since 1987 and a life member since December 2001. He has extensive experience at the chapter level and has served twice as president, Quantico-Potomac Chapter. He has been the recipient of the AFCEA Leadership Award and the Chairman’s Superior Performance Award. While serving on active duty, he was the founder of the Marine Corps General Alfred M. Gray Award, recognizing the outstanding company grade officer serving in an IT position. While at AFCEA International he was co-founder with Lt. Gen. Rhett Hernandez, USA, (Ret), of the Saint Isidore Award for Outstanding Cyber Service.  Prior to joining AFCEA, he held the position of client executive/business development executive with Harris IT Services.