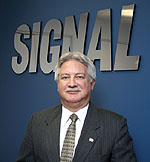 Most of his journalism work over the years has been in print journalism. His writings have covered a range of issues involving technology, politics and international security. His areas of coverage have spanned topics such as military information systems, foreign affairs, intelligence, laboratory research and development, space technologies, international security, terrorism and information operations..

Prior to becoming SIGNAL’s editor in chief, Ackerman served as the magazine’s senior editor. He has been with SIGNAL Magazine for more than three decades, during which he has written hundreds of feature articles and authored more than 400 columns and commentaries. He has been a panel moderator or keynote speaker at conferences in the United States, Germany and Russia, and he has served as a subject matter expert on television in the United States, France and Russia. He has won or shared in journalism awards from the Aviation Writers Association; APEX; the American Copy Editors Society; PRSA; the Society for Technical Communication; and the American Society of Association Executives.