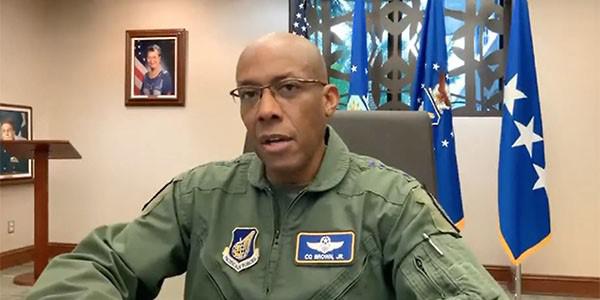 The vast Indo-Pacific region is not well understood. And given the rising threat from China, the Pacific Air Forces (PACAF) operating in that area of responsibility has focused on working closely with U.S. allies and partners to improve interoperability through exercises, experimentation and innovation. The other key priority is increased communication and information sharing, advised Gen. Charles Q. Brown, USAF.

“All this is to provide a free and open IndoPacific,” stated Gen. Brown, who is the PACAF commander; Air Component commander, U.S. Indo-Pacific Command; and executive director, Pacific Air Combat Operations Staff, Joint Base Pearl Harbor-Hickam, Hawaii. The general spoke to industry officials and other military leaders at the AFCEA Hawaii Chapter’s June 30 virtual luncheon.

After two years as PACAF commander, Gen. Brown moves next week to his new role as the U.S. Air Force chief of staff. The current commander of the 7th Air Force, Lt. Gen. Kenneth Wilsbach, USAF, is slated to become PACAF’s next leader.

“I’d like to reiterate the challenge we face in the IndoPacific and the critical nature of access to data,” Gen. Brown stated. “Our ability to access data regardless of distance, regardless of geographic location, and with lightning speed is the backbone of our capacity to project combat power.”

Given its remote operations, PACAF needs a self-healing MESH network, with multiple pathways, to push data from the point of collection to the completion of the kill chain, Gen. Brown said. Any connectivity should provide mobile access and the same instantaneous speed. “I need a highly dependable kill web that is not easily disconnected, is not vulnerable and is not limited by range,” he stated.

As for the concept of Joint All Domain Command and Control, or JADC2, Gen. Brown suggested that the ability to connect, communicate, integrate and synchronize all kinetic and nonkinetic effects should start with “connecting to the right sensor to the right shooter.” The concept should support not only the Joint team, but also allies and partners.

In addition, PACAF is looking for data-centric systems to help push data from a global cloud to regional cloud, so that PACAF, the Joint team and international partners have access to the information needed to make decisions.

The general has worked to improve the dialogue between warfighters, acquisition professionals and the industry to bring capabilities to the warfighter much, much sooner. And he advised companies that they “don't have to obtain perfection,” he said. “I'm happy to take a 50 to 60% solution now, versus a no solution or a solution that is late to need.” The general also asked the industry to continue to help by providing feedback about possible solutions, range of capabilities and the military’s requirements.

Asked whether he was content with the start of PACAF’s agile combat employment (ACE) effort, Gen. Brown said that while they had made strides in developing small groups of multifunctional airmen, it was not as fast as it could have been. “One of the challenges that I think we’ve had is trying to get all of us going the same way, same day,” he noted. The commander has been working closely with other major commands and deputy commanders to advance areas of agreement, and he has worked closely with Gen. Jeffrey Harrigian, USAF, in Europe. In addition, leaders have created a second iteration of a syllabus, outlining the steps for ACE training.

“What I am concerned about is that we make it too prescriptive, or that we bog ourselves down in training,” Gen. Brown noted. “The second part is changing of the mindset, and getting past the union cards that exist in certain career fields that say ‘you can't do this because of X, Y, or Z.’ If we get into a high-end fight and start losing capability, or losing service members, someone's got to step into the breach and make things happen. And they may not be fully trained but they got to have the initiative to be able to step into the job and be able to execute. That is something that if you don't have that ingrained into your day-to-day process, it's going to be hard to do when you get into a conflict.”