The Call for Nimble IT

As TRANSCOM supports the next wave of 10,000 Afghans out of Europe, operations leader initially sees need for more complex IT solutions.
By Kimberly Underwood 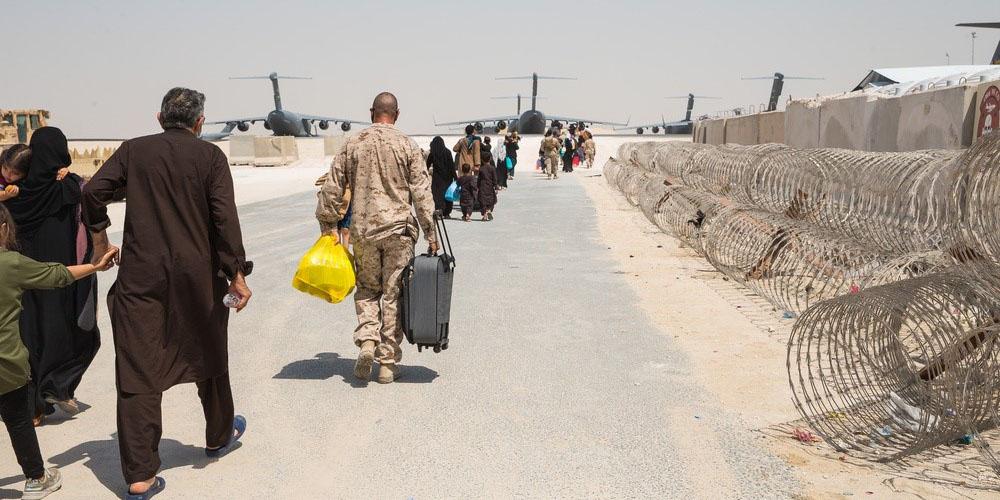 Master Sgt. Michael Lesterick, USMC, carries an Afghan evacuee’s luggage as they board a plane at Al Udeid Air Base, Qatar, September 1, 2021. The Department of Defense, including its combatant commands, such as the U.S. Transportation Command, is still supporting the evacuation of American citizens, special immigrant visa applicants and other at-risk individuals from Afghanistan. Credit: U.S. Marine Corps photo by Lance Cpl. Kyle Jia

The U.S. Transportation Command relied on key command and control technologies during the intense, perilous 24/7 operations during the evacuation of Afghanistan, its J-3 operations leader Maj. Gen. Corey Martin, USAF, stated. And while the evacuation of approximately 124,000 people from Afghanistan following the fall of the Afghan government and takeover by the Taliban in August was tactically successful, the general can see where “more nimble” technologies could be added to make mobility operations more fluid.

Last week, top military leaders on Capitol Hill testified as to the success of the non-combatant evacuation, or NEO, despite the strategic failure of relying on the Afghan government, which quickly collapsed under Taliban control and ISIS-K growth. Gen. Mark Milley, USA, chairman of the Joint Chiefs, told Congressional lawmakers that there were “no estimates” that he was aware of that predicted the complete collapse of the Afghan Army and the government. “The speed, scale and scope of the collapse was a surprise,” he reported to the Senate Armed Services Committee on September 28.

That surprise, however, did not sink the adroit tactical operations performed by the U.S. combatant commands to evacuate U.S. and Afghan citizens during the 11-day NEO, said Gen. Martin, director of Operations, Transportation Command (TRANSCOM). The J-3 spoke with reporters during an October 7 virtual forum of the Defense Writer’s Group, which is hosted by George Washington University’s Project for Media and National Security.

“The Transportation Command was well-positioned to take on an operation like this based on our global responsibility,” he said. “Even though the timing of this event, it was not known and was a bit of a surprise, it started with planning. It was not starting from scratch.”

TRANSCOM has existing authorities to move troops and equipment as needed, authorizing Gen. Stephen Lyons, USA, its commander, to act when needed. “That really allowed for rapid and agile repositioning of mobility forces,” Gen. Martin explained. “And it allowed me as the director of operations to direct the operational movement of C-17s, KC-135 aircraft without having to go back to the Pentagon or to ask the Joint Staff or the Secretary of Defense in order to have operational control. It allowed [us] to be ready to take combat forces, literally almost overnight to Hamid Karzai International in the face of the advancing Taliban to secure that airfield. It allowed for the movement of the evacuees out and then the redeployment of the combat force we needed.”

In addition, the leaders of the involved combatant commands—TRANSCOM, Central Command, Northern Command and European Command—coordinated multiple times a day. TRANSCOM’s Global Operations Center—the heartbeat of the command’s operations—united not just the J-3 operations personnel and all elements of the command, but also at “an action officer level” integrated with officials from the Department of State, Customs, Border Patrol, Federal Aviation Administration and other organizations.

That coordination led to the contribution of more than 30 nations sending aircraft as part of the evacuation. In fact, several thousand people did not have to come out of Afghanistan on U.S. aircraft because of their help, he stressed.

30 nations sent aircraft in Afghan evac, says @usairforce MG Martin J3 @US_TRANSCOM @GWUPMNS Project for Media & NationalSecurity. They retrieved their own citizens as well as got out Afghans at risk. Because of their help, several thousand did not have to come out on US aircraft pic.twitter.com/kQLiww0gTC

The command’s existing information technology (IT) and command and control systems aided these successful operations, the general said.

A larger after-action report activity is underway at the command and Pentagon about the evacuation of Afghanistan, with a study due out next week that will go through more details, but based on his initial experience of conducting TRANSCOM’s operations, Gen. Martin called for more responsive IT.

The command needs digital solutions that can support the intense pace and larger scale of future global operations, especially in a near-peer environment.

“For instance, there was an urgency to get the 82nd Airborne out of Fort Bragg and they were flying out of the Air Base at Charleston because Popes Runway [at Fort Bragg] was under construction,” he clarified. “Velocity was paramount in order to get them to Hamid Karzai International Airport. That does not necessarily allow some of our systems that we rely on for what we call in-transit visibility to kind of keep that pace.”

Most of their systems run through “a more deliberate process of deploying a unit and are not necessarily as agile as they need to be, when a unit that is on alert for any number of missions around the world,” he noted.

More robust, wide-scale systems are also needed to quickly pair personnel with their tailored equipment needs for specific missions. “We need to look at the process that allows for a much more rapid response and the IT that would be nimble enough to keep up with that,” he said. “Now, we did not allow IT limitations to make airlift a limiting factor. We made sure that the airlift was there, and we needed just the basic information to make sure that it was going to be a safe flight with whoever was on board from the Army. But that comes at a sacrifice of a bit of the overall visibility of a number of things, and which aircraft [soldiers] are on. That is some initial thoughts and I'm confident that will probably come out in a more formal after-action report."

And naturally, a joint all domain command and control (JADC2) solution would further aid tactical operations, he continued.

“I think this operation would speak to the utility of a joint all domain command and control system that more wide sensors and a greater sharing of information,” Maj. Gen. Martin said. “Even though this was a very focused operation and not at all on the scale of a war plan, it was obvious that there was time still spent on point-to-point communications to discuss individual data points, numbers of people cleared to travel or airplanes and where they were at that, which if there was a system more like JADC2 envisions that you would have authoritative data that is shared more quickly with a different echelons. Again, it did not inhibit a successful completion of this exercise, but it highlights I think areas that if we were going to take an operation like this and scale it to a larger exercise, you would want to have that type of interoperability without human interface needed to accelerate operations.”