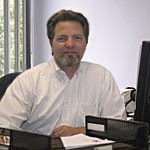 After reading my descriptive paragraph aloud to the class, my fourth-grade teacher in Marmaduke, Arkansas, asked if I had ever considered becoming a writer when I grew up. And that was the moment I knew I would make my living as a wordsmith.I did not know, however, that the writer's journey would include seven years in the U.S. Army Signal Corps, a degree in English and communications from Lyon College in Batesville, Arkansas, a stint as a sportswriter at the Batesville Daily Guard, or experience with Defense News, Federal Computer Week, Raytheon and Northrop Grumman.

I also did not know I would get the opportunity to interview some of the world's most brilliant and interesting people, including members of Congress, members of the Joint Chiefs of Staff, high-ranking military and civilian officials in the Pentagon, and scientists at MIT, the military research laboratories and the National Science Foundation, among others.

I didn't know that my coworkers at SIGNAL Magazine would become some of my favorite people, that my work at SIGNAL would include a trip to Afghanistan, or that someday terms like C5ISR, SIGINT and nano would make complete sense to me.

What I have learned since then, however, is that technology is integral to keeping our nation and allies safe, that the people who design, build, maintain and procure that technology have interesting stories to tell, and that it is an honor and a privilege to help tell those stories