Defense and Security In Europe Today

Even though the Cold War has ended and the monolithic threat against the West has disappeared, the relationship between Europe and the United States remains vital. Europe includes some of the United States’ strongest coalition partners and alliances; the two economies are closely tied and interdependent; and defense and security in Europe are evolving rapidly, just as in the United States. AFCEA chapters and members outside the United States number the greatest in Europe.

Europe Gathers Forces for the Future

AFCEA long has been an international organization moreso than by the mailing addresses of some of its members. Just as successive U.S. administrations recognized the inexorable strategic link between North American democracies and their counterparts across the Atlantic Ocean, so too did AFCEA's leadership. The establishment of the AFCEA Europe office in Brussels, Belgium, in 1980, site of the North Atlantic Treaty Organization (NATO) headquarters, emphasized this importance. During the Cold War, the trans-Atlantic AFCEA link helped provide a valuable two-way dialog for command, control, communications and intelligence (C3I) experts tasked with deterring aggression and maintaining the peace of nearly a half-century.

The Allied Forces Central Europe Command, once a bastion of Western Europe's defensive line, is reinventing itself to serve as a key element in alliance operations outside its area of responsibility. It is consolidating with another regional command, incorporating two of the North Atlantic Treaty Organization's newest members into its structure, and preparing to serve as a parent headquarters to other alliance commands.
International

Many of the same concerns that vex civilian and commercial users of the Internet confront the Atlantic alliance as its militaries embrace Web-based technologies in their ongoing transformations. Yet, the technological changes that are underway offer so many advantages that NATO members must find ways to incorporate them into their military operations. 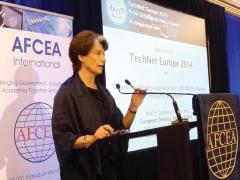 Change Is Afoot in Europe

If you have not been to Europe lately, you need to reflect on how the continent has changed dramatically in recent years. Little has remained constant. The European Union has grown in scope and role and, with it, the euro has emerged as a major international currency. NATO has grown in size and mission, now embracing 26 nations. 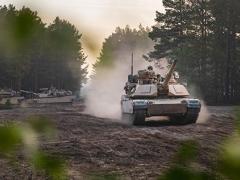 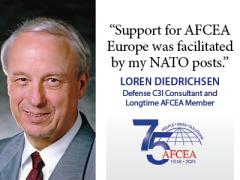 Command Goes to New Wavelengths to Transform Operations in Europe

The composition of the U.S. Army's strategic and tactical signal brigades is evolving to meet the changing needs of the warfighter, and communications is at the crux of the transformation. Simultaneously required for transformation is the centralization of knowledge, security, capabilities and maintenance.
International

In a month when the focus of SIGNAL Magazine might reasonably be expected to cover the aftermath of September 11 one year later, it is an honor to be invited to provide a European introduction to coincide with TechNet Europe in Budapest on October 17 and 18. And that, surely, is an example of the continuing strength of AFCEA International. For while world events may have a significant impact on one particular country, the association can take a broad view and incorporate the outcome into its agenda for the future, but maintain continuity of progress and action to improve and strengthen its appeal and commitment to the membership.